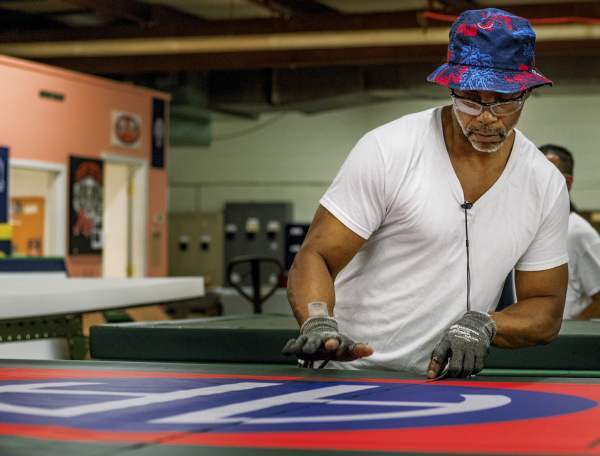 ALLISON LEE ISLEY/SALISBURY POST Terence Jamison lines up an airborne graphic pad as part of the preparation of the outfield wall padding for the temporary baseball stadium in Fort Bragg at Promats Athletics in Salisbury on Wednesday, June 22, 2016. Promats began their production of the mats on Tuesday; they anticipate that the production will be complete on Friday and it will all be installed by next Tuesday. SALISBURY — Matt Cross, general manager at Promats Athletics, has always looked up to his older brother Sean. He was a young child when Sean went into the military. Sean has served in the Gulf and Iraq wars and is now stationed at Fort Bragg.

“Indirectly, it’s my little way of doing something,” he said.

Promats Athletics, at 1455 Harrison Road, has been chosen as the official supplier of athletic equipment for the new stadium, which will host a Major League Baseball game at Fort Bragg in Fayetteville on July 3. The Atlanta Braves will be playing against the Miami Marlins.

According to published reports, much of the stadium will be temporary to accommodate Major League Baseball requirements. The site will later be used for recreational softball.

Promats will be installing backstop and sideline netting and two winged foul poles for the stadium, along with printing the graphics on the padding.

The company will also be donating the BaseZone field wall padding for the outfield, which Cross said is the largest donation in the company’s history.

“This was a way to give back to the game and the servicemen and women,” Cross said.

The Major League Baseball organization contacted Promats in late March, and the company was able to start producing the materials on Tuesday.

Cross said he and the rest of the employees are proud to be supplying materials for the game.

Scott Fleming, manufacturing engineer, served in the army in the early to mid-80s. He said the relationship between servicemen and women is like a brotherhood, so he was proud to be able to work on something that will benefit the people on the base.

“It shows that the MLB and everybody still cares,” he said.

He said it will give the troops a nice break from their other duties.

“I think it’s good for the troops to see a game brought to their location,” he said.

Cross said even if the donated portion of the job is taken out, the work for the Fort Bragg stadium is a large job for the company. The company just finished a job for the Minnesota Vikings, which was the biggest job the company has ever done. Its next job will be for the Atlanta Braves.

The supplies for the Fort Bragg stadium will be complete by Friday and Cross said they plan to finish installation by Tuesday.

Cross said his brother will be able to see his company’s work on his way to his job every day.