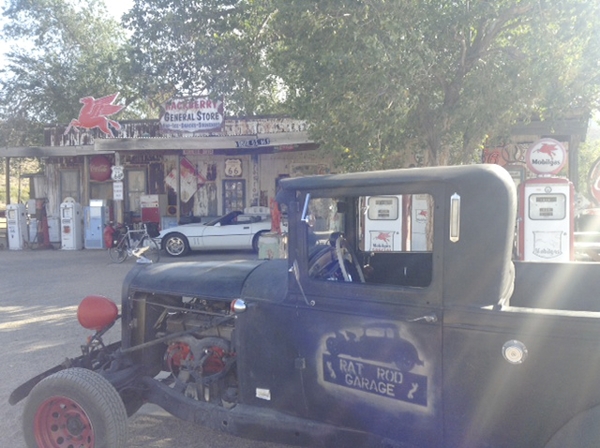 The Hackberry General Store has been around for all of Route 66. One sign says, 'All hippies must enter by back door. No kidding!' Photo by David Freeze Last night, I found out that the motel in Truxton had closed and I called ahead to a couple more. The only two options were way overpriced and would blow my budget. So I set out at 4:30 a.m. once again to see what happens and figure it out as the day progressed. The incredible heat was again forecast, and I had plenty of climbing to do.

Up and out early in an overnight low of 85 degrees in Kingman, I hoped the climbing to a higher elevation would help drop the temperature some. This was the first day that I did not have to turn off of Route 66 all day. Also, the road was very good throughout, the best that I have seen so far. I hoped for some clouds, a tailwind and maybe a few drops of rain.

My first stop was at a store in Valle Vista where a contractor asked me to consider waiting another day for the heat to break. That was not going to work, but I thanked him anyway. On to Hackberry and the home of the most unusual general store that I had ever seen. Then past Valentine, where nothing was happening and on into Truxton, where there is a great convenience store and not much else. This is where my preferred motel had shut down. The clouds had started to cover the beating sun on occasion and the tailwind was picking up. With a purchase of an ice cream sandwich, a big cinnamon roll, the largest cup of ice and four big bottles of water, I was refueled and ready to ride.

By this time, my plan was to ride east another 25 miles to Seligman, Arizona. Seligman is the official home of the rebirth of Route 66 because one of the local businessmen used his contacts to make it happen. I rolled into Seligman feeling pretty good after having experienced some cooling rain, along with the desired clouds and the tailwind for most of the afternoon. My ride was 87 miles today, way more than I thought was possible. Seligman is at an elevation of 5,250 feet after another big day of climbing. Tomorrow’s climbing will bring the elevation to nearly 7,000 feet, near the highest for the whole ride.

One big highlight of the day was meeting Deborah McIntosh and Teresa Albertus of Colorado Springs, Colorado. They have been visiting Route 66 west of Albuquerque, New Mexico, and hoped to dip their toes in the ocean at Santa Monica soon. We met when we all stopped to take the same picture.

Tomorrow should bring me to Williams, Arizona, another of those gunslinger towns. Plus, Williams will be my stepping off point for visiting the Grand Canyon. Deborah and Teresa said that I wouldn’t be disappointed.

Two humorous things happened today. About the middle of the afternoon, I saw two cyclists lying on cots and covering themselves from the sun. Seemed very odd to me, but I didn’t inquire. Another thing is that on my previous rides, motorcyclists seldom wave at a lone cyclist. On this trip, they all seem to. Maybe they think I am a nut.

Eric Phillips and the Skinny Wheels Bike Shop are once again sponsoring my ride. They have worked with me on all four summer rides, and I actually bought both bikes from Eric. Thanks to them for their support.

Major climbing is on tap tomorrow but only about 50 miles. Thanks for all the prayers that helped me have such a great day. Today was fantastic, so much better than I expected! Back at it again tomorrow.

By David Shaw sports@salisburypost.com SALISBURY — It seems everyone has a story about Chris Berman, the longtime ESPN sportscaster who... read more