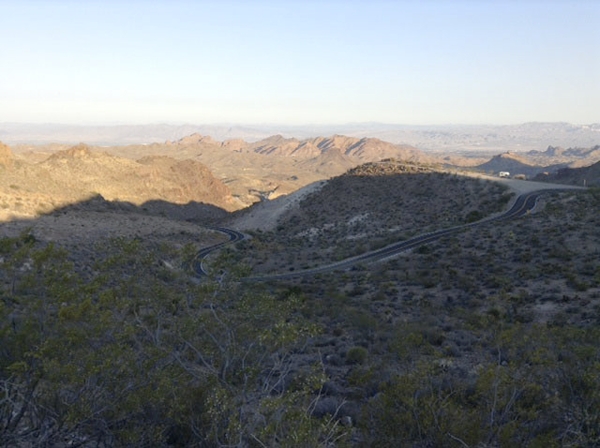 Route 66 as it climbs toward Sitgreaves Pass. Photo by David Freeze An example of a closed down mine just after leaving Oatman. Photo by David Freeze

Yesterday after I wrote my update in Oatman, things changed a little bit. With temperatures over 110, some — and maybe most — AC units can’t keep up. So, when I went down to order my veggie burger at the saloon, I told them that most of the cabin I had rented was still at 90 degrees. They moved me to a much nicer place with central air, and after about three hours, it was more comfortable.

While watching the basketball game last night, I saw what I first thought was a dog looking into the front door at as he walked by. I realized quickly that it was a large coyote. I was on top of a hill overlooking Oatman with a great view.

I left out at 4:45 a.m. to take the bike down the hill and get started on the day. The low temperature was in the upper, 80s and I had to climb about 800 feet in altitude in about 4 miles. That is a serious hill, and all I could do in places was push the bike. Thirty pounds of water had it weighted down pretty well. Just before reaching the summit, I heard a noise and saw two wild burros watching me. I never knew that burros are wild for miles in that part of Arizona. Their droppings are all along the road, but I just thought that horses were ridden often around there.

Getting over the top of Sitgreaves Pass before the sun cleared the mountains was a big boost. The rest of the riding to Kingman, Arizona was reasonable, even with the temperatures climbing fast. One surprise was a very old gas station that is now renovated and offering groceries and cabins miles from anywhere. It wasn’t open yet when I passed by, but seeing inside would be worth the stop.

After arriving in Kingman in late morning, I stopped and toured a fantastic Route 66 museum that highlighted the many reasons that the road was so popular. They also showed old film reels of the attractions throughout Arizona. There are a lot of great things coming up.

Next I toured the Mojave Museum, kind of a catch-all for all the historical things that have happened in the Kingman area. There was quite a bit on how the Indians got their start and what the cowboy life was really like. Gold and other mineral mining was a staple for many area residents up until World War II. Interestingly enough, on the early climb this morning, I passed the large Colorado Mine, which is still at it in search of gold. At one time, the mine was shut down and tours were being offered every day. When the gold prices went back up, they stopped the tours and went back to mining. I also saw evidence of lots more closed mines and noticed at the museum that there could be as many as 100,000 of them out in the hills. Two girls fell through a shaft about 10 years ago, and one was killed.

While all of this is feeding my thirst for historical knowledge, two additional things stood out. For some reason, I keep running into Roy Rogers things. First it was the motel with the sign that featured Trigger. Then, yesterday afternoon, I turned on the TV and there is evidently a Roy Rogers channel here. Today, I saw lots of information on Andy Devine, a sidekick of Rogers in 10 movies. Kingman is Devine’s hometown, and Route 66 through town is named “Andy Devine Avenue.” Devine acted in over 400 films.

Last but not least, most of you know that I have been interested in older military planes for quite some time. After World War II, 7,000 military planes of all sizes, but mostly heavy bombers, were brought back to Kingman for dispersal. A few were sold to Americans, but most were sold to one man who turned them all into scrap. It is rumored that he got his money back just from the aviation fuel that was left in them.

I am in another Route 66 motel tonight called the Hill Top Motel, another good choice of the many that are here in Kingman. When I arrived at the motel, it was 117 degrees but has now gone down to 112. More heat is expected for the next few days. After only 33 miles today, I should have less climbing tomorrow and will hope for more before the real heat gets started. The elevation will be gradually building and will approach 5,000 feet in a couple days.

It is still hot, but all is going well. This was a great day to absorb the culture of Route 66, what some call the “Mother Road.”

By Josh Bergeron josh.bergeron@salisburypost.com SALISBURY —  An Enochville man was slapped with nearly 20 criminal charges after allegedly using his... read more