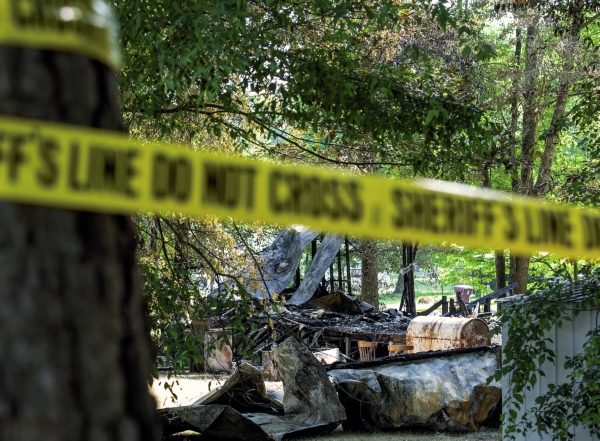 ALLISON LEE ISLEY/SALISBURY POST Sheriff's tape surrounds the destroyed mobile home of Amanda Kay Smith, 33, on Honeysuckle Lane in Salisbury on Monday, June 20, 2016. Smith's body was discovered alongside Leonard Road in Salisbury on Friday. Two people have been charged with the murder. Two people have been charged in her slaying.

Timothy Clarence Smith Jr., 30, of Kannapolis, and Stephanie Hall, 30, of Salisbury, are each charged with first-degree murder and second-degree arson. They were arrested Sunday in Horry County, S.C.

Timothy Smith is not related to Amanda Smith, authorities said.

Around 6:30 a.m. Friday, authorities received a call that a body was lying on the side of the 3000 block of Leonard Road, near High Rock Lake. Emergency personnel were dispatched to provide aid, but Amanda Smith was already dead. Her body was partially burned.

Lt. Chad Moose of the Rowan County Sheriff’s Office said Smith was murdered in another location and brought to the 3000 block of Leonard Road.

At roughly the same time as Smith’s body was found, her mobile home at 245 Honeysuckle Lane was destroyed by a fire. Sheriff’s Office detectives determined the fire to be deliberately set. Smith had been murdered and her house intentionally set on fire.

Timothy Smith and Hall are were being held Monday in Horry County, but will be returned to Rowan to face the charges.

By Shavonne Walker shavonne.walker@salisburypost.com SALISBURY — A Rockwell teen has been identified as the driver killed in a Saturday crash... read more