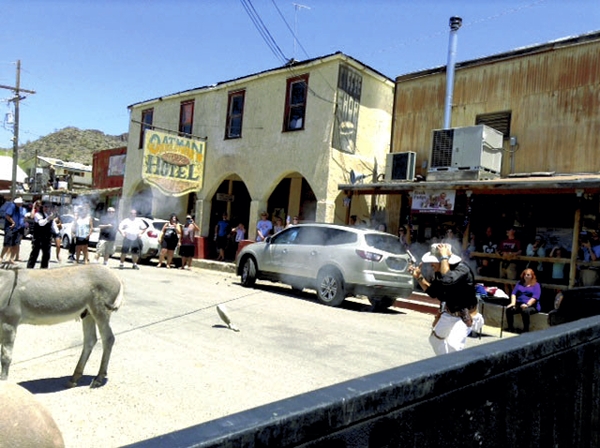 A gunfight at high noon in Oatman, Arizona. This where Freeze is spending the night. The burros run free. Photo by David Freeze.

I was up and riding east from Needles this morning with a plan. I thought I was hydrated well and had plenty of water to make it close to 70 miles to Kingman, Ariz. My maps said that the better route would be on Interstate 40 but as soon as I hit the Arizona line, the breakdown lane on the interstate was in poor shape. Too rough to ride on, leaving the best alternative to using Route 66 toward Oatman and then to Kingman. The road surface is not good here either, but the climbing goes so slowly that it does not matter much. I secretly wanted to see Oatman anyway because it has gun fights and wandering burros. It is a Wild West town that never changed. The saloon, hotel and plenty more are still here. In fact, Clark Gable and Carole Lombard spent their honeymoon in 1938 here. The actual room is still intact and quite a visitor attraction.

Oatman holds an annual egg frying contest in July but today might be a good day to practice. Entrants are allowed to use any solar-based gizmo they want to facilitate the frying. There are gunfights here each day and I got to see one as soon as pulled into town. This was at the same time that one of the free wandering burros was trying to get into my bike bags. The town is named after Olivia Oatman, who was abducted by the Mojave Indians and was forced to live with them for several years. Oatman residents made their money with mining up until World War ll.

What happened on the way here has to do with why I am in Oatman and not farther down the road. I saw that it would be over 100 degrees by 10 a.m. As I rode, there was plenty of building heat, and I was climbing from 400 feet in altitude to close to 3,000 at Oatman. It was the hardest riding that I remember on any trip and I was counting down the miles. There was little traffic, less than 20 cars during the whole time that I was riding between the two towns. I made just 42 miles today.

I drank all the water I had and that included one bottle that came from a passing van. This was simply not my day. A gift shop operator told me that there were cabins for rent and I got one. So I am hydrating and going to hit the road early to continue climbing up and out of the valley. The next 800 feet in altitude will be very steep with lots of switchbacks. Tomorrow will be a short day too because I want to look around Kingman, home of Andy Devine. Plus the extreme heat is supposed to moderate after another day tomorrow.

Also, the desert is beautiful! Over every hill something changes and I just started to see some wildlife for the first time. The colors of the mountains are spectacular and the vegetation is quite unusual.

Gear for Races is one of my regular sponsors on these adventures. The company supplies the shirts that are used for most of the local 5Ks. I’m wearing one now that will get washed in the shower tonight. It has salt stains all over it and needs refreshing otherwise.

One of my daughters asked me to make good decisions in the heat and I feel like I did today. There are no towns for the next 28 miles and conditions were questionable at best. Now it is time for some ice cream and restocking of plenty of water. Stay tuned, the heat is supposed to abate. I am ready for it. Right now the thermometer outside shows 106 in the shade. Don’t worry, I am fine but keep those prayers coming.

Beyond the ambulance: 24 hours with Rowan EMS