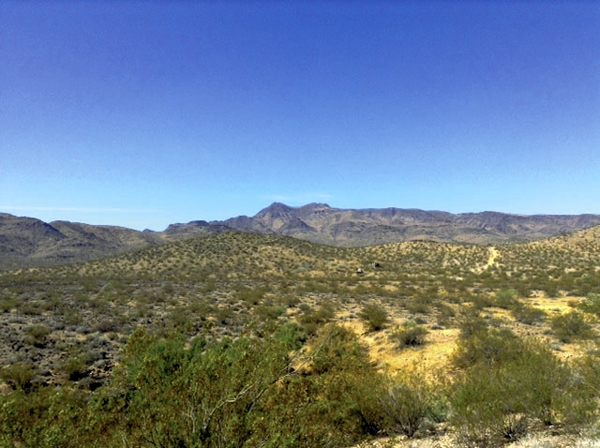 This is the way it looks in the hot and dry California desert. Imagine the covered wagon settlers driving across this for endless hours, probably searching for water too. Photo by David Freeze.

Riding Route 66: It’s 111 degrees, so I must be in Needles, California

I’ll start off by saying that I made it to Needles. This day has been something that I have worried about since originally planning the trip. I knew it would be really hot today, so I made it to Ludlow last night, the closest town possible with a motel. All went very well there, but I will finish up tonight with a little oddity that happened in Ludlow last night.

Back to today and a very challenging trip. I decided last night to ride I-40 for as much as I could. I found out that Route 66 had two bridges out and that we would be diverted to riding 30 miles or so on it anyway. Up at 3:30 a.m., out the door at 4:30, I went right past the “no bicycles allowed” sign in the dark. I saw it, but was going to say later that I didn’t if confronted.

Riding in the dark for most of the first hour was OK, but I narrowly missed something that looked like a rubber roll. As soon as the sun came up, I saw another sign that told drivers to share the road with cyclists and immediately felt better. I missed Siberia and maybe if I had not missed it, the temperature would have been cooler today. I also missed Amboy where one kind person has kept a convenience store open in the middle of nowhere.

I rode by one end of Essex Road, in the same area where General Patton trained his troops to battle German General Rommel in WWII. I saw Fenner which has a rest area with warm and tepid drinking water and a convenience store.

That brought me to Needles. I was whipped from some long climbs during the day, one that lasted for ten miles which is similar to a Rocky Mountain climb. Once over the last one, we had climbed about 16 miles to cross through a pass that sent the traffic downhill for 16 miles to Needles. Imagine coasting downhill but often having to pedal because the wind was hard into my face. Needles, besides being one of the hottest places on earth, was home to Charles Schultz of “Peanuts” fame. It is also lush and green because the Colorado River flows through town. I didn’t know about the river but there had to be something that brings people to this place. I am staying in a Budget Inn tonight that may have been here for the heyday of Route 66. It is a very nice old style room with an AC unit that is working hard, probably because I am hugging it trying to get refreshed. My first stop in town was at the DQ for yet another pineapple milkshake. There might be another one later.

There is an old wagon beside the road here that is said to be the one used for Death Valley Days, the Ronald Reagan TV show. I was disappointed to find yet another section of Route 66 heading into town that is almost impossible to ride on a bike.

Thanks to Claire Watts for recommending the rollup water bottles that are easily packed. I rode 93 miles today on the hottest day I have ever experienced and only stopped at the rest area along the way.

Thanks also to Delaine Fowler for continuing to sponsor my cycling adventures. Good thing that she had a big hand in fixing my sciatica because I feel very good on the bike to this point. Delaine’s business is Fowler Physical Therapy, right beside DJ’s.

Now for the oddity that happened last night. I was out taking some pictures of the sunset over the mountains. The motel is part of truck stop/cafe/motel all owned by one person. I was more than a little restless about today and walking around helped. Earlier in the day, I stopped at a Dollar General in Barstow to get some snacks and a battery for my cyclometer. Two ladies in front of me were buying ice. I got back on my bike and rode approximately 60 more miles to Ludlow for the night.

When I was out taking pictures, I noticed the same two women looking at some historical stuff outside the cafe. I walked over to talk to them and found that they were out riding part of Route 66 for a few days. Tere Tangeman and Barbara Polson are from the San Diego area. Imagine the chance of seeing them again and us recognizing each other. We made pictures of each other as it was getting dark last night.

Now that my ride to Needles is complete, I have no idea about tomorrow. It is supposed to be 121 here but the more I climb out of the valley, it should get cooler. I should enter Arizona tomorrow. Thanks for staying tuned and especially for the prayers.

By Katie Scarvey For the Salisbury Post After her first marriage ended, Eugenie Eaborn’s children told her she needed to... read more