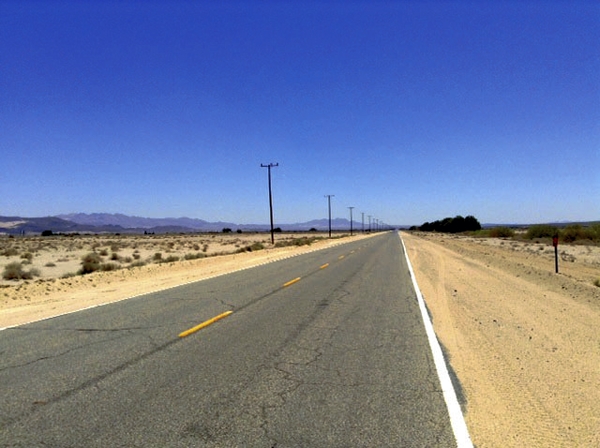 This was a day when not many cars were on Route 66. At one time, Freeze didn't see a car for more than 20 minutes. Photo by David Freeze.

Riding Route 66: Nearing the desert, the heat is on

Not much doesn’t hurt on my body this afternoon. It was a challenging and hot day riding through the desert. It is the barest landscape that one could imagine. What houses there are have no grass, but some of them keep the dirt smoothed out very well. I saw one guy raking his dirt this morning.

Last night, I spent the night in Victorville at the New Corral Motel but it is really very old. Out front is a sign that has a raring horse on the top of it, the horse meant to signify Roy Roger’s Trigger. Rogers used to have a museum in Victorville but it was later moved to Branson, Missouri.

I got a very early start this morning meant to beat the heat. It is going to have to be even earlier tomorrow but I will address that later. First town up was Oro Grande which has a very small business district right on Route 66. There is a forest of bottle trees on the road that is pretty cool.

Next was Helendale with the Exotic World Burlesque Hall of Fame. Too bad that I was too early to see it. Admission is free, priced just right for me. Barstow was next. It is slightly smaller than Salisbury but has about 20 motels along Route 66 with at least two of them called the Route 66 Motel. It also had a McDonald’s where the patrons eat in old rail cars. There was a big water tower on site too.

Daggett was the next town. It has a 1880s hotel that Tom Mix stayed in. Next was Newberry Springs with two convenience stores and not much else. I did find that the town was once called “Water Town” because it supplied water by rail car to Ludlow, my home for the night.

I found out that it is hot in Ludlow and until 1988, they did not have dial phones. The residents picked up the phone to make a call and then an operator from Los Angeles or San Bernardino would come on line to help them. On an incoming call, every resident had a distinct ring and only that resident was supposed to answer.

My stop for the night is in Ludlow after 92 toasty miles. This is the last motel before my long trip to Needles, California, tomorrow. When I get there, the temperature should be about 110, but that sounds cool with the projected high more like 120 for Sunday and Monday. I hope to be gone by then.

Today, I rode quite a bit of the actual Route 66 road. Some of it was in great shape but a long section of about 9 miles was so rough that I could hardly stay on the bike. At my first opportunity, I jumped back on the interstate and completed today’s ride. They actually have “Share the Road” signs posted on I-40. I will spend at least some time on I-40 again tomorrow.

Another highlight of riding on Route 66 is that the railroad tracks are usually right beside the road. Since the scenery is so poor in this part of the desert, I love looking at the trains passing. I imagine that this was a common sight through all the major “America’s Highway” years.

I saw a Dairy Queen coming into town and I am heading there next for at least one pineapple milkshake. Maybe another tomorrow if I can pull off an even hotter ride. Say a little extra prayer on Saturday morning if you think of it. I have never experienced 110 degrees before.

But so far, so good. I just pray that the bike and me both stay together on this challenging ride. Thanks for the fourth straight year to the Salisbury Post for publishing this adventure sequence. My association with the best small town newspaper is wonderful.

See you tomorrow from one of the hottest places on earth — Needles, California.

By Rebecca Rider rebecca.rider@salisburypost.com SALISBURY — What if a teacher could stop a behavior problem before it ever starts? Diffusing... read more