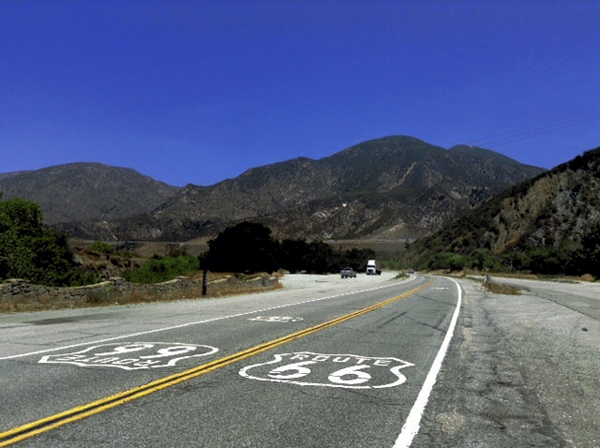 This is the way the terrain looked this afternoon. Old Route 66, Interstate 15, and two train tracks are all running through Cajon Pass, the highlight of today's ride. Photo by David Freeze, for the Salisbury Post.

Riding Route 66: Tough climbing and riding on the interstate

After a nice night at the 20th Century Motor Lodge in Glendora, I got on the road as soon as I could see and be seen. I think Glendora is at about 900 feet in altitude, give or take a few. Immediately this morning there was a slight uphill grade to most of my riding as I headed through San Dimas, one of the prettiest towns I’ve seen. My maps suggested riding on an urban greenway type trail called the Pacific Electric Trail. I could only stand it for about an hour because I wanted to see the sights and the cities along Route 66. Mike Beadwood of Rancho Cucamonga gave great directions and then we talked about the upcoming heat wave for California and Arizona. More on that later.

Rancho Cucamonga was nice too and had plenty of good bike lanes. So far, I have had no trouble with California drivers at all and everyone seems courteous. On to Fontana, another big California city, and then San Bernardino and that is where the day changed.

I saw some old motels and and a gas station that still has the price of gas at 17 cents including tax. McDonald’s and Denny’s are sure taking advantage of the Route 66 theme with Denny’s making the whole building look like a roadside diner.

Following Route 66 out of San Bernardino included a steady climb for about 8 miles and then a serious one for a little more than a mile, then steady again for 8 miles. Route 66 is an old road that is no longer maintained in places and it comes to an abrupt end at a junction with Interstate 15. Somehow the State of California has approved those cycling Route 66 to continue for eight more miles on I-15. This was extremely hard climbing, all in my lowest gear. One truck broke down and blocked the lane that I was riding in, requiring a dash and run to get out the way of a bunch of speeding traffic. It was wonderful to crest the Cajon Summit at 4,190 feet and finally start coasting.

Forced to get back off I-15, the maps called for me to ride a service road of sorts called Mariposa Road. That road was so bad on the first eight miles that I nearly lost control of the bike. The maps said to make sure that everything is bolted down good on your bike, but it didn’t mention that the rider might get thrown.

I will spend tonight in Victorville, California, where I just rejoined Route 66 after 73 challenging miles. Tonight’s place of repose is the New Corral Motel. It is a holdover from the early days as well. The room is great and should do just fine.

There is a much different appearance to the land now. No naturally occurring real trees, just scrub stuff that wouldn’t make much shade. There is little grass that isn’t irrigated. People are still nice, thought I am starting to look pretty scruffy. Just a few minutes ago, I asked a young Hispanic man for directions to the grocery store. Before I could ask, he said, “No, I don’t have any spare change.”

With that, I will mention two more sponsors, the Men on Missions from First Baptist Church in China Grove and Leonard Wood. Thanks to both of them.

I am spending some serious time working on how to address the desert heat. I will tell more about that tomorrow. But today was a good day!  Thanks for following the adventure.

‘Love does win’: Vigil held for victims of Orlando massacre

By Rebecca Rider rebecca.rider@salisburypost.com SALISBURY — It’s quiet except for the peal of a bell and the sound of sniffles from... read more