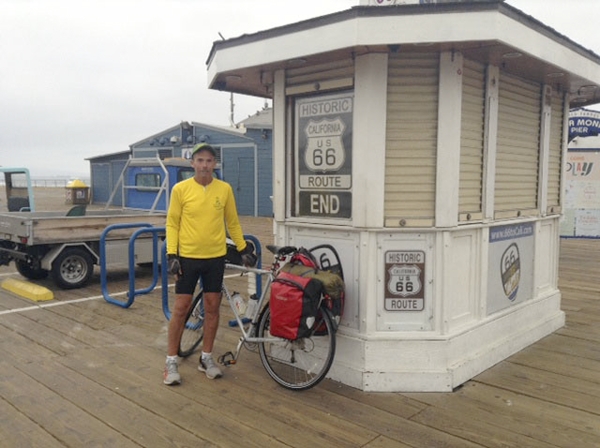 Freeze and his bicycle at the official start of Route 66 on the Santa Monica Pier. Photo courtesy of David Freeze

I kept waking during the middle of the night thinking that I needed to get on the road. It’s hard to get used to West Coast time. Since my flight on Tuesday was so early, I had less than four hours sleep Monday night. I felt strong today on the actual first day of riding, probably due to the extra sleep.

My room for last night was in an Airbnb, and it was a wonderful first experience. The room was quiet, nice, clean and very comfortable. Just 12 blocks to the beach didn’t hurt either.

First up this morning were the required ceremonial photos of the start of Route 66 at the Santa Monica Pier and then the wheel dipping of my back tire in the Pacific Ocean. I got a cool Forrest Gump photo, too, and another of the plaque that proclaimed Santa Monica as Muscle Beach.

The guys at Cynergy Cycles had my bike ready to roll, so I felt good as I finally rode east. It has been another cool and cloudy day, just the same as yesterday. Not sure if the clouds are smog or just clouds, but there was at least a few drops of misty rain. The bike guys at Cynergy had warned me about hurried drivers, so I kept my eyes open. After what seemed like hundreds of stop lights and not much synchronization, I was off the seat and waiting out the lights at three of every four. But not a single horn was blown at me in Santa Monica, Los Angeles, Beverly Hills or Hollywood.

Beverly Hills was good, but Hollywood isn’t worth visiting again. I tried to get close to the Hollywood sign on the hill next to the city but didn’t take the time to ride all the way up to it. I did find out that the caretaker for the sign used to live in one of the L’s. The letters on the sign are 50 feet tall. I also rode on Sunset Boulevard and saw the section that was referred to as Sunset Strip.

Dodger Stadium was nearby because I saw Vin Scully Boulevard as I was leaving Los Angeles. If it had been an American League team other than the Red Sox, it would have been worth the time to find the stadium.

I did get a horn in Pasadena but it was my fault. I didn’t notice the light change while I was reading a map and didn’t get moving soon enough. Oddly the car that blew at me had Texas plates. I rode the same streets that the Tournament of Roses Parade is held on each year on Jan. 1. Pasadena is also the site of the first cheeseburger after what the grill chef originally called “a cheese hamburger” was done in 1924.

The Santa Anita racetrack in Arcadia was on my route today as well. This is the horse-racing track that Seabiscuit used for his comeback. During World War ll, it was used as a detention center for Japanese Americans.

I rode 53 miles today and felt good about it since I had so many stoplights. It seemed as if I stood watching cars at those intersections as long as I actually was able to ride.

One of my plans on this ride is to experience some of the actual history of Route 66. When convenient, I plan to stay in as many of the older motor motels as I can. Tonight, I am at the 20th Century Motor Lodge in Glendora. It was built in 1947 and just a few years before me, Richard Nixon, Ronald Reagan and Doris Day all spent the night here. The rooms are described as cottage style and are perfect for a bicycle traveler like me. I met manager Sherrie Berillon earlier, and she gave me ideas of other Route 66 stops worth visiting. As soon as I submit this, there is a classic diner called Legends just a couple of blocks away on Route 66 that is calling my name.

So far, so good. I expect more miles tomorrow and it is going to get hotter, too. Some real challenges are coming up, and I’m still working on a plan.