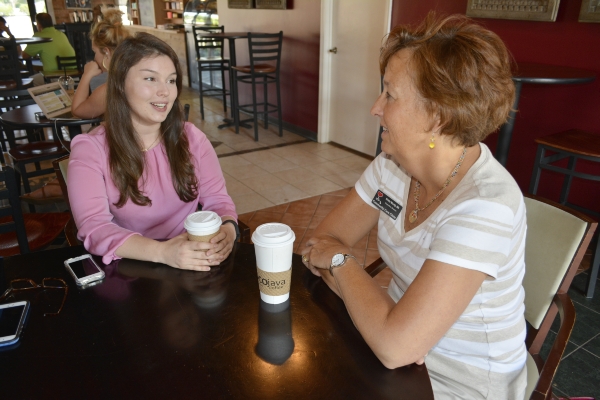 Her name: Alyssa Smith. Her mission: To get you healthy.

“We’re working together to identify and improve our citizens’ health,” says Krista Woolly, executive director of the Community Care Clinic, and a member of the Healthy Rowan committee.

“We met several times after the summit,” Woolly says, “and we realized we had to have someone here to lead these efforts. Alyssa is going to have 25 bosses.”

Although Smith’s office is located at Community Care Clinic, she’s working to improve the health of the entire community, Woolly says.

“You need a key person to take all of these ideas and bring people together,” Smith says. “The Community Care Clinic is a perfect place to house our office.”

“She has an identity apart from our organizations,” Woolly says. “We offer clinical services in a community setting.”

The Healthy Rowan Advisory Board includes representatives from the categories of the Y, the faith community, mental health agencies, housing, education, public planning and government — just to name a few.

The two areas of emphasis — identified at the Health Summit — are obesity/chronic disease and behavioral/mental health.

That is to say, the overall emphasis is on wellness.

“We want to do things that help people become healthier, physically and mentally,” Smith says.

Attendees to the Health Summit learned that Rowan County’s health ranking is 76 out of the state’s 100 counties. Cabarrus County, meanwhile, is 6.

“We can look around and see how unhealthy people are,” Woolly says. “Wellness affects all populations, not just those in poverty, so we’re really talking about obesity and inactivity.”

Smith will eventually serve as a liaison to churches, schools and other local organizations, assisting them in making healthy choices.

“It could be something as small as not serving doughnuts at a staff meeting,” Woolly says.

The daughter of Robert and Susan Smith, Smith is a native of Salisbury. Her grandmother, Jane Smith-Steinberg, was a P.E. and health teacher at Knox Middle School for 30 years, and was recently named to Salisbury High School’s Athletic Hall of Fame. Her dad works for Integro and her mom is a special-needs teaching assistant.

Her father served in the Navy before returning home to Rowan County. Smith went to Erwin Middle School and graduated from Gray Stone Day School. She received a degree in psychology from UNC, and a master’s in public health from USC.

“I wanted to come back and be near my family, and see what I could do to help my community,” Smith says.

“Salisbury is a very interesting place,” she says. “There are a lot of people here who really care.”

She and her boyfriend enjoy spending time downtown on the weekend. They love swing dancing and can be found at the Big Band Bash each January.

For now, the position is part-time. Smith works eight hours a week in Salisbury, and the rest of the time she works in business development at Cabarrus Health Alliance. Woolly’s goal is to have grants in place to enable Smith to work full-time in Salisbury within three years.

“We want everybody moving toward healthy living,” Woolly says. “That’s our goal.”

“We need that concerted effort to move the needle of wellness in Rowan County,” Smith says.

A Salisbury man has been charged with multiple counts of having sex with a child and indecent liberties with a... read more