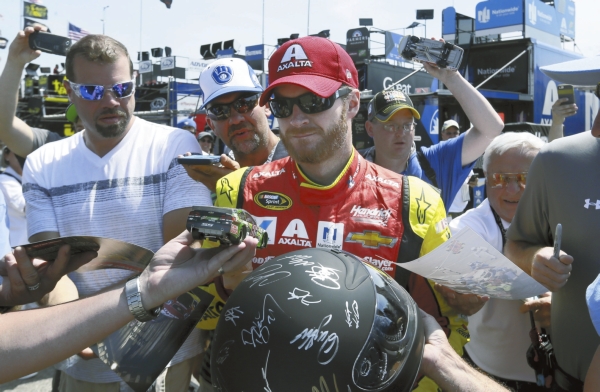 Earnhardt to match career high with 34rd start at Michigan

BROOKLYN, Mich. (AP) — Dale Earnhardt Jr. slipped through sliding doors of his hauler, and parted into a sea of memorabilia-toting fans.

“Make a hole please!” a man working for Hendrick Motorsports shouted as he walked with Earnhardt. “He has to get to his car for practice!”

Earnhardt silently signed some autographs Saturday and didn’t have much time to stop and talk on a busy day.

Does he have a lot of memories at Michigan International Speedway?

“Yeah,” Earnhardt said in a voice just loud enough to be heard over the sounds of revving engines and clamoring fans.

After preparing for a practice, he changed into a suit to provide commentary during the Xfinity Series race, which included some drivers that compete for him and JR Motorsports. During breaks, he was featured in a TV commercial.

Earnhardt will start 27th Sunday in the 40-car field at NASCAR’s FireKeepers Casino 400 on a two-mile oval he has become very familiar with over the years. Joey Logano has to pole and will be in the front row with Martin Truex Jr. and just ahead of Tony Stewart and Denny Hamlin.

Earnhardt, a 26-time winner, has two victories at MIS. He will make his 34th start on the track, tying Richmond for the venue in which he has competed on the most since making his NASCAR debut in 1999.

He picked up a desperately needed win at the wide, high-banking track on June 17, 2012, and ended a four-year, 143-race slump without a victory.

Earnhardt is coming off his best two-year stretch — winning three times last year and four times in 2014 — since winning a combined eight races in 2003 and 2004.

This year, though, Earnhardt hasn’t won any of his 14 races and is among three drivers ranked in the top 12 without a win.

“Each and every week, there are 12 to 15 guys with a shot to win,” said Kyle Busch, who leads the top series with three victories. “And, there are about five more guys who can surprise you by winning.”

Earnhardt was second at Pocono, his fourth runner-up finish this year.

“Pocono was a good step in the right direction,” Earnhardt said. “I felt like we could go there and run good. I think we learned a lot that we could use to understand how to get better. I’m looking forward to Michigan. Obviously, it’s going to be a different package, but I think it’ll make for good racing and we should run well on that track, too. I anticipate having a good weekend.”

NASCAR is tweaking its aerodynamic package this week, and next month at Kentucky, in the hopes of creating more competitive racing.

Among the changes are reducing sideforce by setting the rear toe to zero and shortening the spoiler by an inch.

“We’re working on getting these cars to be less aero dependent,” Busch said. “We want them to be more drivable so we can outrace guys and make moves with a better handling car instead of getting stuck in a line. I think that’ll help the product. I haven’t been comfortable by myself out here so far, so that doesn’t bode well for being in traffic. Maybe everybody will be uncomfortable and we’ll just have to outdrive them.”