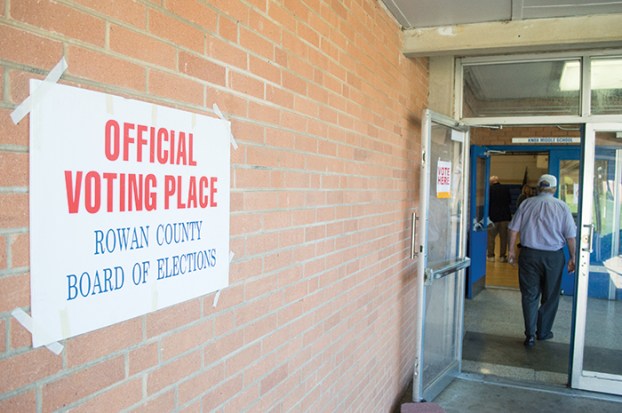 A voter walks into Knox Middle School's gym, which served as a polling place, during a 2016 primary.

From rural areas to the most significant precincts in Salisbury, voter turnout in today’s primary is turning out to be as low as expected.

Polls are open in Rowan County until 7:30 p.m. today. A form of photo identification is required to cast a ballot.

Two hours after voting started, Salisbury’s North Ward had less than 30 total voters. It was an unusually low number for the precinct, which normally ranks among the city’s higher turnout areas. Regardless of their usual turnout numbers, Rowan County’s precincts saw minuscule voter numbers early Tuesday.

Salisbury resident Sarah Kellogg, who voted in at Salisbury’s North Ward location, said she lives in a more politically engaged part of the city. Most of her friends and acquaintances were aware of Tuesday’s election, she said.

Jane Smith-Steinberg, who voted at Knox Middle School, said a number of people probably will not vote or are not aware there’s an election occurring. Smith-Steinberg questioned how that’s possible.

“How do you not know, especially in this primary?” Smith-Steinberg said, citing news coverage and roadside signs. “When people don’t vote, I really get upset. It’s your duty to vote.”

Voter turnout for the June 7 primary is expected to be relatively low, and there’s no runoff in any race. As a result, candidates in congressional races may win with just a couple thousand votes and a several-dozen-vote lead on the second place finisher.

No voting problems had been reported to the Board of Elections by late Tuesday morning.

For questions about voting, contact the Rowan County Board of Elections at 704-216-8140.

By Josh Bergeron josh.bergeron@salisburypost.com SALISBURY — A Kannapolis-based company hopes to add 20 new jobs with a bit of help from... read more