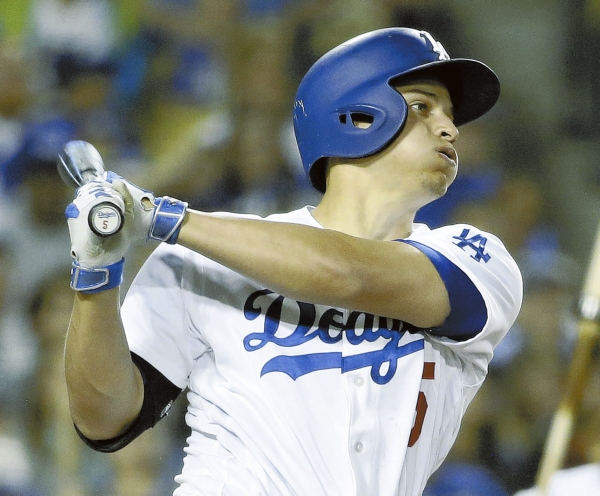 LOS ANGELES (AP) — The ball came out of Julio Teheran’s hand seeming as big as a pizza pie, and Corey Seager was hungry.

The rookie shortstop homered three times, driving in the go-ahead run with his second shot in the sixth inning, and the Los Angeles Dodgers beat the Atlanta Braves 4-2 on Friday night in the series opener.

After the game, he headed home to eat — what else? — pizza with teammate and roommate Trayce Thompson, who had the Dodgers’ fourth homer of the game.

It was the second multi-homer game of Seager’s career, with the young shortstop blasting two against the Cardinals on May 15. He became the first Dodgers rookie with three homers in a game since Don Demeter on April 21, 1959, against the Giants at the Los Angeles Coliseum.

“I’m enjoying the development, the evolution, whatever you want to call it,” Dodgers manager Dave Roberts said. “It seems like every night he’s going to do something special.”

Dodgers pitcher Ross Stripling calls him “Seag-sauce,” and lately Seager has been cooking.

“The temperament, the pulse and the mechanics of his swing, all these things make a good player to a great player,” Roberts said. “We’re lucky to have him. He’s unfazed, whether it’s a big spot or the (crowd) recognition.”

“He didn’t have his fastball command and battled to get through six-plus, but he did,” Roberts said.

Kenley Jansen tossed a scoreless ninth for his 16th save in 18 chances.

Returning from a seven-game trip, the Dodgers won their fifth in a row and eighth in their last 10 at home.

Seager capped his night with a shot to left field leading off the eighth against Hunter Cervenka. The crowd demanded a curtain call, and he complied, tipping his cap from the top of the dugout steps.

“That one put a smile on my face,” he said. “That’s something that you really enjoy and kind of soak that one in.”

Seager connected on the first pitch from Teheran (1-6) leading off the fourth, drawing the Dodgers to 2-1.

Thompson followed in the fifth, sending a 1-0 pitch into center field to tie the game at 2.

Seager came back in the sixth with his 11th homer of the season, a shot to center field that gave the Dodgers a 3-2 lead.

“It was his night,” Teheran said. “There’s nothing I could do. I threw him a slider and a changeup away and he still hit them out.”

The Dodgers’ youngsters provided all the power on a night when leading hitter Adrian Gonzalez went 0 for 3 with a walk, leadoff hitter Chase Utley struck out swinging four times and Justin Turner was 0 for 4 with two strikeouts.

Teheran was the hard-luck loser, allowing three runs — two earned — and three hits in 5 2/3 innings. He struck out seven and walked two, including just one walk among his first 10 batters. The right-hander is winless in six career starts against the Dodgers.

“I threw good pitches and they still hit them. I can’t get a break in this park,” Teheran said. “We have to get going and I’m going to find the love. I’m not frustrated.”

Other than their four homers, the Dodgers didn’t advance a runner beyond first base until the seventh when Yasmani Grandal walked and Thompson doubled into the left-field corner. But they stranded both runners.

The Braves led 2-0 on RBI singles by Adonis Garcia in the first and Mallex Smith in the second.

QUOTE OF THE NIGHT

“They all have 10 hitting coaches, and they read the newspapers and listen to the radio and it clutters their minds even worse.” — Braves hitting coach Terry Pendleton on his team’s .226 batting average, lowest in the majors.