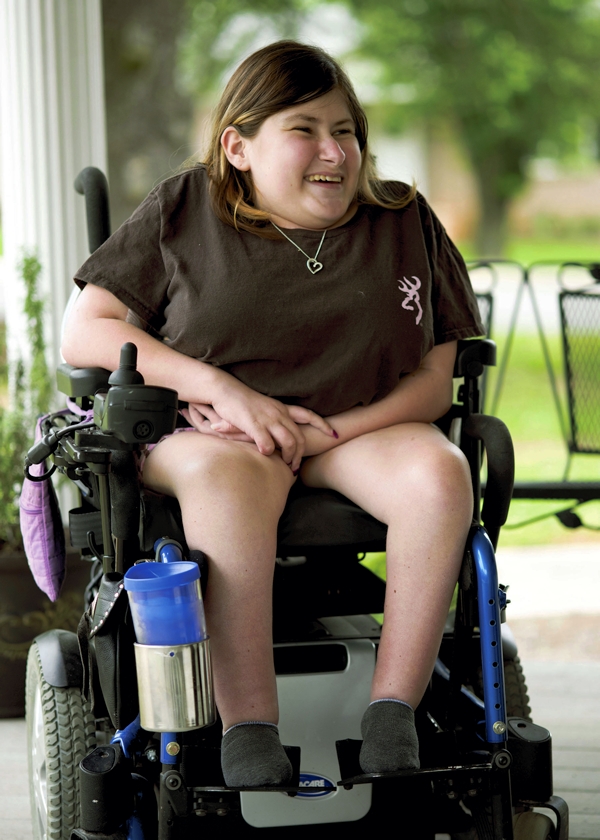 JON C. LAKEY / SALISBURY POST South Rowan high school senior Ariel Bryant has had many surgeries over her young life to improve her quality of life from the effects of spina bifida. Bryant hopes to go on to college and enter the medical field. Wednesday, May 11, 2016, in Landis, N.C.

In March, Bryant was admitted to the hospital with a tethered spine. Born with spina bifida, a common birth defect in which the spinal column does not close all the way, she’s no stranger to back problems — but this one started out differently, she said.

In February, Bryant said she started choking — she couldn’t swallow water without choking and coughing. It took eight visits to the emergency room before doctors finally found the cause: an unusually curved and tethered spine.

For Bryant, that final trip was the start of a solid two months in the hospital, where she underwent six surgeries on her back.

“I was so ready to get out of there,” she said.

While her classmates studied and prepared for prom, Bryant stayed in the hospital, unable to lie on her back. She received a thick stack of get well cards from school, and her mother would bring up her civics homework, and they’d work on it together. Her mother would read out the questions on the worksheets, and Bryant would answer.

Her 2-year-old brother, Dustyn, would shoo people out of the room when she got restless.

But now, Bryant is home, and is already making plans for her future. But first, she has to graduate. Bryant had two classes to complete: a science course and a civics course. The school told her if she completed all her work, she’d be good to go.

She wants to be physician’s assistant to a neurosurgeon. Her own doctor in Charlotte served as her mentor for her senior project, and she loved getting to learn about the field and work in his office. She’ll be attending Rowan-Cabarrus Community College first, and then transferring to University of North Carolina at Charlotte or Greensboro.

But before then, she wants to travel. Bryant said there’s a lot of the world she wants to see. She wants to go to New York, Paris and the Bahamas.

Graduation is the start of her journey, and Bryant said she’s already dreaming about going across that stage. She’ll get her diploma and say, “Bye!”