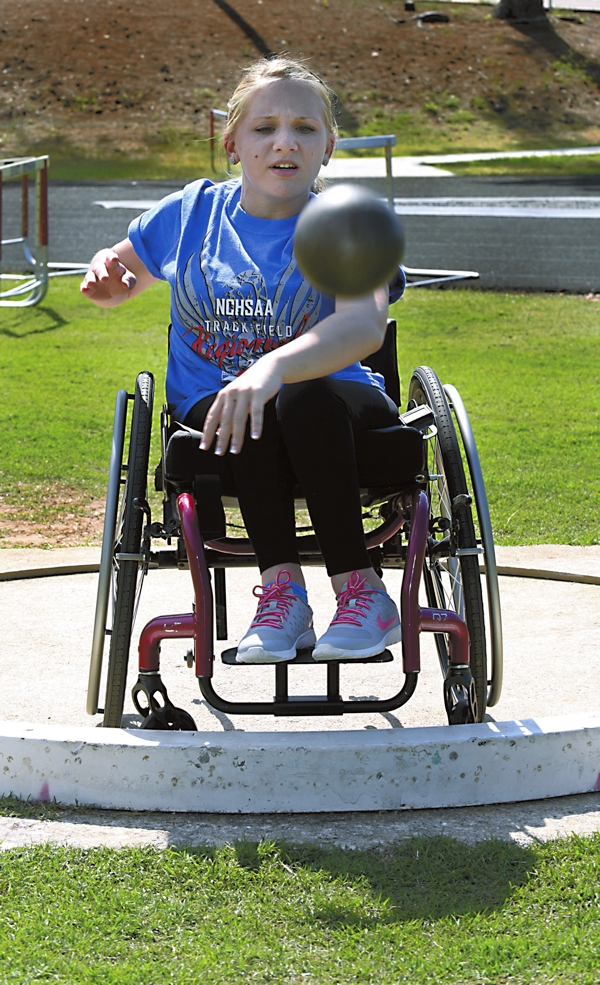 East Rowan High senior Taylor Kirk has competed in high school track and field shot putt for the past 2 years from her wheelchair. She cradles the 8 pound shot putt in her left hand and pushes. photo by Wayne Hinshaw, for the Salisbury Post

GRANITE QUARRY — When Taylor Kirk started her freshman year at East Rowan High School, she said she set out to make a name for herself. Elementary and middle school were spotted with absences as Kirk underwent a surgeries to help treat spina bifida, a condition she was born with. Her last surgery was her eighth-grade year.

“I was so glad to get that behind me,” she said, “Because when I got to high school, I wanted a fresh new start … and that’s exactly what I did.”

She started by joining East Rowan’s chorus. She sang in middle school, but at East, under teacher Dean Orbison, she blossomed.

“I really don’t know what I would have done without it. It’s been a huge part of my life,” she said.

Her freshman year, she joined a “Broadway” production put on by the chorus, full of songs that followed a single theme. When she first started, she said, she was full of nerves. Kirk uses a wheelchair, and she wasn’t able to do the footwork and choreography other students could. She wasn’t sure what people would think when they saw her on stage “just sitting there.”

“I was so nervous of what people would think of me doing stuff like that,” she said.

But as the group started to practice, Kirk said, she gave it her all. She kept other students in line, and fell in love with the spotlight. Kirk said that first performance, and the practices leading up to it, transformed her into someone more confident and outgoing. For the next three years, Kirk joined every chorus performance she could.

“It’s the most life-changing experience you could ever have,” she said.

When she was a sophomore, Kirk took up shot-put. Teachers suggested it might be a good sport for her in middle school, but Kirk said when she started at East, no one knew how to accommodate her. By the next year, they were ready.

Kirk still remembers the first time she picked up the 8-pound ball.

But the coach, Laurie Wyrick, had a senior show her some techniques, and Kirk warmed up to the idea.

“Ever since then I’ve excelled in it. I’ve loved it,” she said.

That doesn’t mean there haven’t been some bumps along the way. At her first competition, Kirk said her first throw was a measly 6 feet and 11 inches. Members of a rival school sitting in the stands began laughing at her. Still new to the team, Kirk said no one from East stood up for her. But it just made her more determined.

“I’ll just show you next time,” she said she thought.

And she did. Now in her senior year, Kirk is the state champion for wheelchair shot-put for indoor and outdoor track, with a best throw of 9 feet 2 inches.

She’s modest about the accomplishment, though. Kirk laughed and said mostly, she wins because there’s been no one to compete against. But she keeps pushing herself, because she knows that somewhere out there, there’s someone with a throw better than hers.

When she graduates, Kirk plans to go to Rowan-Cabarrus Community College, and hopes to transfer to Catawba. She thinks she wants to study psychology and work with kids. She said she was inspired by all the hours she spent in the hospital as a kid.

“It makes me want to help them in some way, in any way that I can, because I know how it feels to be homebound and how hard on your mind it can be,” she said.

But Kirk found out recently that she doesn’t have to wait to help out others like herself. At the last state competition she attended, there were two boys competing in wheelchair shot-put. Their parents told Kirk that the two read about her, and she inspired them.

For Kirk, graduating comes with mixed emotions, but she said she’s determined to “keep on climbing.”

Graduation 2016: North Rowan prepared her to go back to Yemen