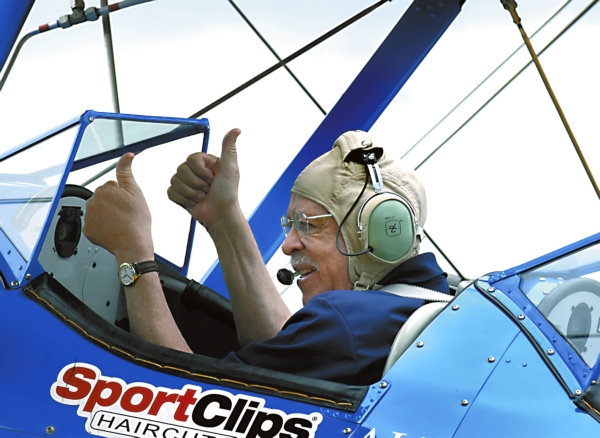 Ageless Aviation Dreams Foundation of Carson City, Nevada, currently uses a fleet of three Stearman planes, the most widely used pilot trainer during World War ll, to give flights to surviving veterans and their widows. So far this year, Ageless Aviation has given flights at no cost in eight states and 27 cities.

As a platoon sergeant, he said, “I loved it all except my tour in Vietnam. Duties included advisory, logistics and engineering.”

After meeting Herman during college at Johnson C. Smith University, Margaret enlisted in the Women’s Army Corps in 1952 with the purpose of relieving men who could be used in the battlefield. Margaret became a corpsman and eventually served in Heidelberg, Germany.

“I was responsible for giving electrocardiograms, and my first patients were several generals,” she said. “I forgot to put the film in the machine, and they had to come back and have them done again. But things got better, and I made corporal in three years.” Margaret is now 86 years old.

Margaret and Herman both married others, then a death and a divorce claimed their spouses. Herman heard from his mother that Margaret was then living in Washington. He flew there the next day, and the Snellings were married five months later and now have celebrated 38 years of marriage.

The Snellings were both welcomed back from their flights by Salisbury Mayor Karen Alexander, a pilot herself.

“I can’t think of another more special day than to be here with these veterans, some of them in their 90s, and seeing their brilliant smiles as they take their flights over the country that they fought for while honoring those who made an even greater sacrifice,” Alexander said.

Originally from Oregon, 88-year-old Bob Horand served in the U.S. Army during the Korean War from 1950 to 1952. His duties centered on assigning personnel.

“I thoroughly enjoyed it,” Horand said of his flight. “I saw Oak Park, the Food Lion warehouse, the VA, and the downtown. The flight was very smooth, and just the perfect length, a truly outstanding experience!”

Serving in Vietnam with the U.S. Marines was part of Tom Nolan’s four years in the military. Now disabled from the effects of Agent Orange, Nolan has battled through three heart attacks and various cancers. After a law career in Florida, Nolan now lives at Oak Park and helps the residents with their own legal issues. He had flown in helicopters but not in an open cockpit plane prior to his flight Monday.

Originally from Alaska, 87-year-old Earl Graves served in the Navy aboard the destroyer Joseph P. Kennedy. Graves’ duties included logistics of supply, making sure that the ship had ample amounts of fuel, food and ammunition. An early highlight was being catapulted off the destroyer deck on a scout plane detailed with searching ahead of his ship.

Though Graves enjoyed his flight this week, he didn’t want to take control of the Stearman while in the air. When asked if he wanted some water after landing, Graves replied, “If you don’t have any beer!”

Eventually rising to rank of staff sergeant, Ron Hands served in the U.S. Army from 1950 to 1958. His unit was charged with installing new gun batteries briefly in Korea before he was transferred back stateside and to the National Guard. Hands later became a corporate pilot for Hardees Inc., but declined to take the stick during his flight on Monday.

“Oak Park residents were so thrilled and it was truly an amazing experience for them today. It was wonderful to see them creating new memories while they were honored for their service,” said Oak Park Activity Director Karen Leonard.

As primary sponsor of Ageless Aviation Dreams Foundation, SportClips was represented by area manager Nikki Robey, who called it “very emotional out here. This is amazing!”

Ageless Aviation founder and President Darryl Fisher served as the pilot throughout the day. He said,

“This is great,” he said. “This was a wonderful stop on our nationwide tour, and we even had the mayor stop by, plus the Rowan County Airport and Oak Park Retirement are fine hosts!”

Find out more about Ageless Aviation Dreams Foundation at www.AgelessAviationDreams.org

By Rebecca Rider rebecca.rider@salisburypost.com SALISBURY — The difference between an at-risk child and their more advantaged peers is one of words,... read more