Alvin Kluttz: Rowan hero on the battlefield and baseball diamond 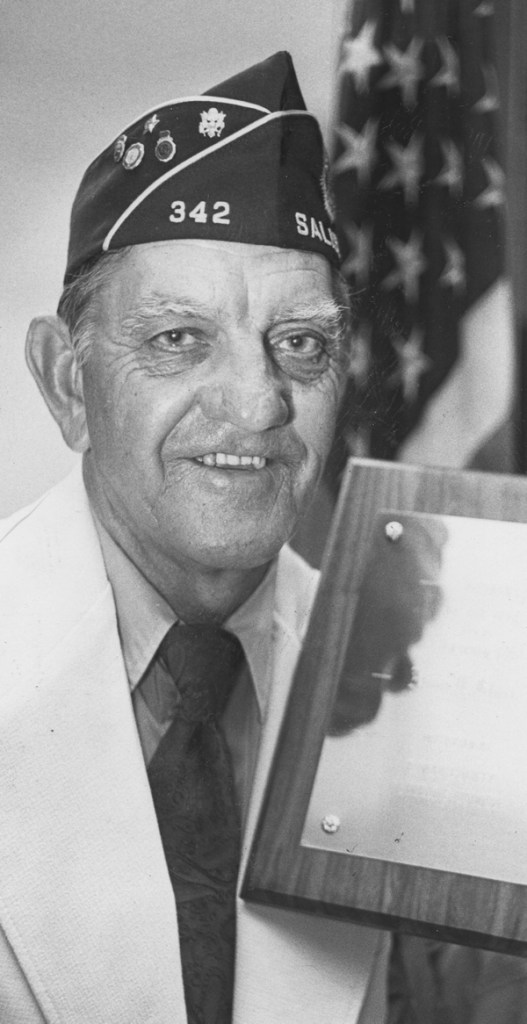 Salisbury Post file photo ... Alvin Kluttz In 1978, when he received a Bronze Star for his service during World War II, from a U.S. Army lieutenant colonel at Salisbury’s Harold B. Jarrett American Legion Post. The honor came 33 years late, but Kluttz accepted the decoration proudly. He died in 1985.

In recognition of Memorial Day weekend, the following is the first of a three-part article about the late Alvin Kluttz, who was heroic on the battlefield and baseball diamond.

It was December, 1941, a week after Pearl Harbor, and Boyden senior Alvin Clifton Kluttz opened the local high school basketball season by scoring an unheard-of 30 points in a 52-24 romp against visiting Hickory.
Before Kluttz’s breakout performance, no one had ever scored more than 24 for Boyden.
Those were low-scoring days. Even with several athletic legends on the 1940-41 roster — Alvin, Carroll Bowen, Harold Bowen and A.D. Dorsett — Boyden averaged a modest 30 points per game. Kluttz averaged a team-high 11.2 points for a 10-7 team coached by Bill Ludwig.
Alvin was even better at baseball than basketball. His athletic future appeared bright, but those were traumatic times.
World War II interrupted his dreams.
A little more than three years after his 30-point game, Alvin was lying in a field in eastern France with his upper left arm shattered by a machine-gun bullet and with 48 pieces of shrapnel, a late Christmas gift from German shells, clawing through his chest.
By all odds, Alvin should’ve died that day, and his plight was desperate enough that he considered sawing his ravaged arm off with his trench shovel. But he didn’t. He was a ballplayer before he was a soldier and he knew he’d need that arm to swing a bat if he got back to the states.
So he lay there on his back with snow falling on his face and shells falling all around him.
••••
In 1941, Alvin’s older brother, Clyde, was a catcher in the organization of the St. Louis Cardinals, who had 19 minor-league farm clubs. Making it onto the roster of one of the 16 big-league clubs required not only talent, but good fortune.
Alvin followed his brother as a Cardinal in 1941, signing not long after he finished high school. He was assigned to the Springfield (Ill.) Cardinals, a Class C team in the Western Association. Alvin was 19, and like his brother before him, he was taught the catching trade late in life. In high school and American Legion ball, Alvin had stood out at just about every position — except catcher.
One of Alvin’s closest friends on the Springfield team was a 20-year-old who also had switched positions — from pitcher to outfielder. His name was Stanley Musial, and he would become one of the great hitters of all-time. Musial wasn’t “Stan, the Man” yet, but he would be in St. Louis before the end of the 1941 season.
That first year in the pros was a struggle for Alvin. He batted .173 in 32 games with only one homer, but his hustle impressed the Cardinals.
Alvin was back home in Salisbury in February, 1942, when he received a wire from Cardinals general manager Branch Rickey. The Cardinals were in need of an extra bullpen catcher for Spring Training, and Rickey invited Alvin to fill that role.
It was a great opportunity for Alvin to work out with big leaguers and to perform in front of the Cardinals coaches, but he was struck by a fastball in the ribs by Cardinals pitcher Max Lanier. That rib injury led to pleurisy, a painful disease in which the tissues lining the lungs and chest wall become inflamed. Alvin was supposed to catch for the Asheville Tourists in 1942, but he basically lost that entire year to health issues.
Meanwhile, Clyde was in the major leagues by April, 1942. He hadn’t made it to the The Show with the Cardinals, but he did make it with the Boston Braves.
Back on his feet in 1943, Alvin played for the Lynchburg (Va.) Cardinals, a Class B team that briefly included an infielder who went 17-for-36 before he moved up. That was another future Hall of Famer — Red Schoendienst.
Alvin played against Yogi Berra in the summer of 1943. Berra was catching for the Norfolk Tars, a New York Yankees farm team. Alvin played in 65 games that season for Lynchburg and batted .227.

Then the U.S. Army tugged the 21-year-old away from baseball.
The Army was splendid duty for Alvin at first. He was stationed at Fort Bragg for nine months and quickly found a prominent place on the base’s strong baseball and basketball teams.
In the summer of 1944, Alvin was sent to Camp Gruber, near Muskogee, Okla. That’s where his training intensified.
Kluttz was a member of the 42nd Infantry, known as the Rainbow Division. The unique unit included soldiers from each of the 48 states.
The Rainbow Division was born during World War I when National Guard units from 26 different states and the District of Columbia were molded into a single division. That division’s chief of staff was Douglas MacArthur. He said “the 42nd stretched like a rainbow from one end of America to the other.”
The name stuck. And the Rainbow Division performed so heroically in World War I that it was reactivated in 1943.
Soldiers like Kluttz, a private in Company F of the 222nd regiment, would fight near the same woods and fields on the French-German border where thousands of Rainbow soldiers had been casualties 25 years earlier.
On Nov. 11, 1944, Kluttz and the soldiers at Camp Gruber were confined to the base, and they knew they were about to move out. They boarded Pullman cars two days later. Their destination was Camp Kilmer, N.J. They all realized they’d soon be on ships bound for Europe, but most weren’t worried. D-Day at Normandy five months earlier had been a resounding success. Everyone said the Germans were beaten and in full retreat.
The Rainbow Division landed in Marseille, a port city in southern France on Dec. 8-9 and began moving north to Strasbourg, a city on the Rhine River, on the French-German border. They would soon learn the Germans weren’t quite finished.

Tomorrow: Kluttz is wounded and lies on a snowy battlefield in France for hours.