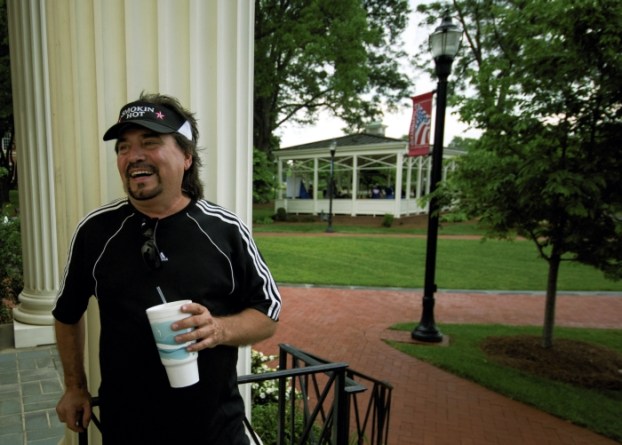 CHINA GROVE — Singing in the choir at First Baptist Church in China Grove was Gary Lowder’s first chance to perform for the public. He was soon part of the glee club at South Rowan High School, where Lowder remembers being encouraged to sing for the student body. The song, “Live Without Love,” was his own composition.

“The girls really liked it, but imagine how hard it was to do that,” Lowder said.

Wanting to become a better singer, Lowder began working with Diane Wike, the Glee Club Choir pianist, to improve his ability to sing chords. She helped him by playing the piano and charting his songs. Lowder thought of little jingles and Wike helped make them into original songs.

Lowder became the lead singer for the Twilights, a group of area high school kids managed by Ralph Farmer from Kannapolis.

“We were kind of like the Southern redneck Bee Gees,” he said. “Our voices were almost the perfect blend while we wore the ruffled shirts of the late ’60s, early ’70s disco era.”

Farmer took the 17-year-old Lowder to Memphis, Tenn., to audition for Stax Records. In the same studio that was responsible for many of the hits of Otis Redding, Willie T, Isaac Hayes and Al Green, Lowder’s demo tape was turned down.

“I couldn’t believe it,” he said. “But we did get an original song from Chips Moman, legendary producer and song writer, for the Twilights to record. Sadly, we never had the opportunity to record it.”

With bookings as far away as Georgetown, Washington, D.C., and Hollywood, Fla.,, the band was on the move.

“The trip to Hollywood had the Twilights as the opening act for Wayne Cochran and the CC Riders,” Lowder remembered. “We had to play our first set at 10:30 p.m. and then our last one at 5:30 a.m. while wearing our purple jump suits and white patent leather loafers. We also opened for Wilson Pickett and the Righteous Brothers.”

The band changed its name to Hot Smokin’ Brass and began practicing in a remodeled chicken coop. Just after Lowder left the band, the Hot Smokin’ Brass members thought they had their big break when booked to open for Jackie Wilson. Wilson’s stroke and a band breakup slowed things before the band eventually regrouped.

After a 10-year stint as an insurance salesman locally, Lowder migrated to Minneapolis and then St. Paul, Minn., where he followed his musical dream as part of the house band at the Ramada Inn. After 18 years in Minnesota, the time seemed right for him to leave and head back south when two of the band members were hired by Prince. During a 1992 visit home, Lowder heard Hot Smokin’ Brass play and eventually rejoined the band briefly. Their lead singer was out for medical reasons, and the band thought Lowder was the best possible replacement since he already knew their style and many of their songs. Lowder then returned to Minnesota.

Things began to come together when Lowder moved back south in 2005 and settled in Ocean Isle Beach, S. C. Guest sessions with several well-known beach bands such as the Entertainers and the Carolina Breakers followed.

Lowder then formed his own band, Smokin’ Hot, and ventured full time into beach music.

“I didn’t know that the area would be so supportive of us,” he said. “There is a market here for beach music like no other. Shaggers and youth shaggers with their dance competitions are just part of the beach music phenomena that is uniquely specialized to Georgia, Virginia and the Carolinas.”

Smokin’ Hot garnered 13 nominations for the 2015 Carolina Beach Music Awards after Lowder got CD of the year in 2013.

The biggest song so far has been ‘I Want It All Back,’ written and offered to Lowder by Gary Poole of Gold Hill.

The future looks bright and very busy for Lowder, now with six grandchildren. His daughter, Carla, is married to a music minister and has three kids. Son Chaz, a Christian DJ, and his wife also have three children. Lowder is engaged to be married, although no date has yet been set.

In Kannapolis this past Thursday to perform at Veterans Park, the band played a mix of beach favorites plus Percy Sledge, Rod Stewart, Motown and an Elvis-like rendition of “American Trilogy” just before a major thunderstorm shortened the evening’s performance. Smokin’ Hot will again be in the area at Nazareth Children’s Home on Saturday, June 4.

Already with 150 bookings for 2016, Smokin’ Hot will perform most of them in outdoor venues.

“We get a bigger crowd outside and it’s just a much different atmosphere than many of the clubs that we play,” Lowder said. “We should have about 8,500 to 10,000 people at our largest booking. We often play three, four or five times a week.”

Lowder also has a new gospel CD due out this year with 12 songs suggested by fans and friends.

“One day, after this is all over, I want to focus on singing contemporary gospel music,” he said. “These songs are all about the message, and you can really touch someone’s heart with a song. When you can support yourself by doing what you love, nothing can be better.”

Gary Lowder and Smokin’ Hot also have a new CD due out in August. For more information on them, visit www.garylowderandsmokinhot.com