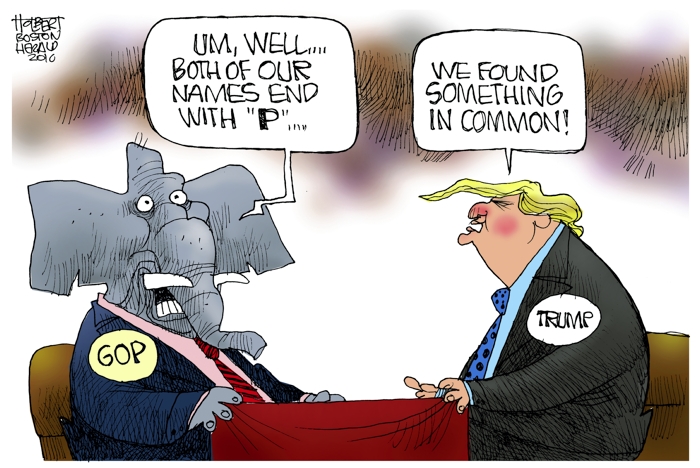 Now that both Donald Trump and the Republican Party’s chairman, Reince Priebus, have declared Trump as the presumptive presidential nominee, the attention turns to the general campaign and the November election.

Since the “presumptive” title was bestowed, the GOP nominee has made some interesting statements regarding party unity, especially since the GOP’s convention chairman, House Speaker Paul Ryan, said he’s not able to support Trump.

In the Carolinas, several Republican elected officials have come out in favor of unifying behind Trump, such as U.S. Sens. Thom Tillis and Richard Burr, who will share the ballot with Trump this fall. At the recent state Republican Party convention, Senator Burr even went as far as to say “It’s time to elect a Republican president. … It’s going to be Donald Trump.” He even echoed Trump’s campaign slogan, “Make America great again.”

But when asked if he will campaign with Trump in North Carolina, Burr deferred by stating “I’m going to be focused on my own re-election.”

Nevertheless, not everyone is fully embracing the party’s presidential candidate. South Carolina Sen. Lindsey Graham tweeted “if we nominate Trump, we will get destroyed……..and we will deserve it,” followed by another tweet that stated “I also cannot in good conscience support Donald Trump because I do not believe he is a reliable Republican conservative.”

In one recent appearance on a round of Sunday morning talk shows, Trump said party unity isn’t essential to victory.

“Does the party have to be together, does it have to be unified? I actually don’t think so,” Trump said, because he’s “very different from anybody who’s perhaps ever run for office.”

Perhaps never a truer statement has been uttered about Trump being “very different from anybody who’s perhaps ever run for office,” but unless there is a tectonic shift, Trump may want to consider appealing to those who typically identify as Republicans, simply because of the composition and allegiance of the general electorate.

In the American National Election Studies survey of the 2012 presidential election, a question was asked of the 5,000-plus respondents about their party identification and the strength of the attachment to that partisan affiliation. Based on their possible percentage within the electorate, one can also find how these voters (from “strong” partisan to “pure independent”) voted for the two major party’s presidential candidates.

If Trump believes that he can reach across the partisan aisle and pull Democrats (either independent-leaning Democrats or ‘weak’ Democrats) to cross over and vote for him, he will also likely have to deal with potential independent-Republicans and weak Republican voters who are fearful of his candidacy and may defect to vote for Clinton, not show up at all, or simply skip the top race and vote Republican down ballot.

The country’s partisan affiliation and adherence has been documented over the past few election cycles, and to break the party ‘allegiance’ pattern from voters who identify somehow with one of the two party’s would be a fairly significant feat.

Making predictions six months out from the general election is difficult, but if Trump continues his streak of partisan-death-defying feats that have secured him the GOP nomination, the breaking of partisan fidelity may be something to watch over the summer and into the fall.

It would, however, take a Trump-sized attempt to break that faithfulness. Then again, 10 months ago, most couldn’t comprehend the Republican Party being lead into the 2016 presidential campaign by Donald Trump.