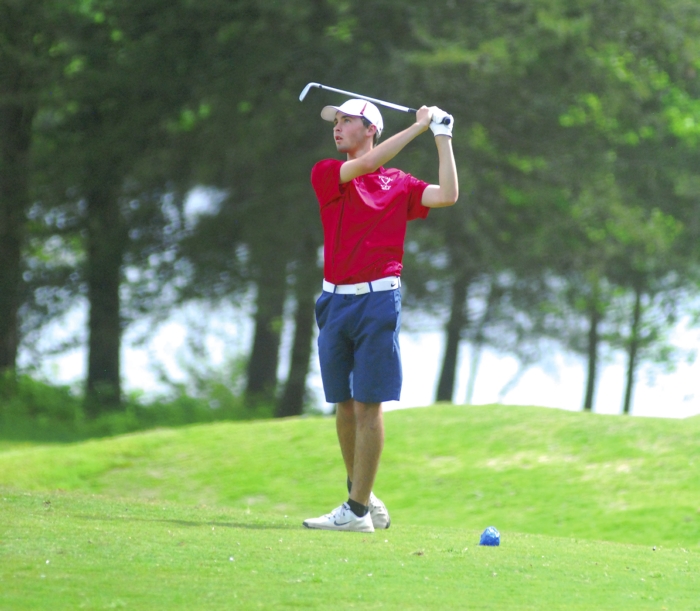 Dennis Davidson/Salisbury Post file photo ... East Rowan’s Nick Lyerly, shown in a photo from the SPC Tournament on April 25, shot a 75 on Tuesday as the Mustangs finished second as a team in the 3A State Golf Tournament at Whispering Pines.

Staff report
East Rowan’s golf team settled for second place in the 3A State Golf Championships on Tuesday.
The Mustangs were 3A runners-up for the second year in a row.
East’s 299 on Monday was good for the first-round lead, but the Mustangs shot 316 on Day 2 at the Country Club of Whispering Pines and finished at 615, 14 shots back of Gastonia Forestview. The Jaguars, who won their fifth consecutive state title, shot 302-299 — 601.
“We just couldn’t keep the pressure on,” East coach Rhett Teems said. “And Forestview put the pedal to the metal. If we make a few more putts here and there, maybe the day goes different, but Forestview has a great program.”
East held off Marvin Ridge and Cuthbertson, the Union County teams that tied for third at 620. Rockingham County (623) rounded out the top five.
East junior Nick Lyerly led the Mustangs with a 75. He shot 146 for the tournament and tied for fifth. Lyerly was 3-over on Tuesday, making a birdie and four bogeys.
East Carolina-bound senior Logan Shuping shot 79 on Tuesday and finished at 153, tied for 19th. Shuping’s second round included two birdies, but he was hurt by a triple-bogey 7 on No. 17.
Seniors Christopher Queen (80-81 — 161) and Ben Rollins (81-81 — 162) were East’s other scorers on Tuesday. Four scores count toward the team score. Queen had a steady round. Rollins made two birdies to help offset four double-bogeys.
Sophomore Bryson Sprinkle’s 74 was a key to East taking the first-round lead, but he got off to a rough start with a “9” on the first hole on Tuesday and made a double-bogey on No. 2. He came back, made three birdies to card an 83 and finished the tournament at 157.
It was a great season for East, which won Rowan County, South Piedmont Conference and Midwest Regional championships.
“I’m proud of everything we accomplished, and these guys did a great job representing their community and Rowan County,” Teems said. “It’s really hard when you come up one match short of your final goal, but we hope to be back here again next year. We lose some great seniors, but we’ll still be strong.”
Competing as an individual, Concord senior Walker Cress shot 73-72 — 145, good for fourth place.
South Johnston’s Patrick Stephenson shot 71-71 — 142, 2-under, for the individual championship.
•••
In the 2A State Championships at Foxfire, Salisbury sophomore Alex Antosek shot 78-84 —162 and tied for 20th. … Wilkes Central shot 620 to romp to the team title by 21 strokes. … Pinecrest (590) won the 4A title, while Mt. Airy (610) took the 1A championship.