Relay for Life: Cancer survivors keep on keeping on 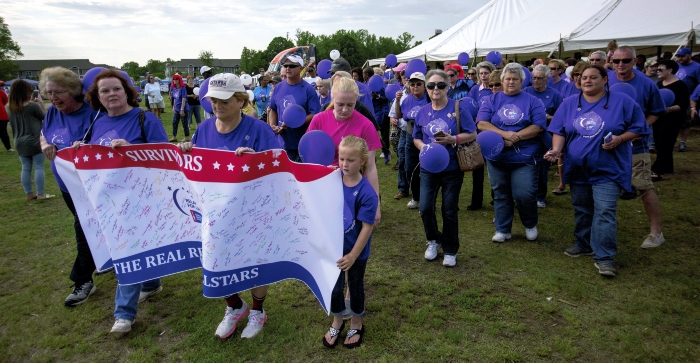 Cancer survivors wearing purple shirts walk in the parade during the Relay for Life event at the Rowan County Fairgrounds on Saturday. Relay for Life is a fundraising event for the American Cancer Society for research into cancer treatments. Photo by Jon C. Lakey, Salisbury Post.

SALISBURY — Penny B. Barger is one of those people who takes what life dishes out. Now it just happens to be breast cancer.

“You can wallow in it, or you can just keep doing what you do,” Barger says. “I’m not a wallower.”

Two days after she underwent a double mastectomy, Barger attended Relay for Life 2016 on Saturday, going up and down the Rowan County Fairgrounds midway looking for corn on the cob.

But she really was there to help and support, as she does every year, the “Friends for Life” team. There, she and her buddies were selling hot dogs and strawberry shortcake and offering a $1 photo booth and speed pitch chances — all to raise money for the American Cancer Society.

This year’s Relay for Life event was a one-day, noon-to-10 p.m. affair that, going into Saturday, could have been judged a success. Some 80 Rowan County teams representing 476 participants already had raised $114,202 by Friday, and last year’s event ended up donating $242,000 toward cancer research.

The Rowan Relay for Life has consistently been one of the biggest in the region, Event Co-leader Crystal Wagoner said.

The always emotional and quite celebratory survivors ceremony, roll call and walk around the fairgrounds track occurred close to 6 p.m. in a day otherwise filled with food, music, contests, pep rallies, hair-cutting, giveaways and a nighttime luminary service.

Once her surgery heals, Barger faces six weeks of radiation, then maybe in a year, she can start thinking about reconstruction. Heading into Thursday’s operation, she already had endured six months of chemotherapy.

“I’m good,” Barger said with a big smile Saturday. “I’ve been good with it all. It kind of is what it is. You do what you have to do.”

Barger said she was already going stir-crazy at her family’s farm, so she asked her mother, Carolyn, to drive her to Relay for Life. “Bless my momma’s heart,” she said. “I’m just dragging her around.”

Penny Barger said her husband went through every stage of emotion for her. “Every emotion I should have had, he’s had,” she added.

For the 10th year, cosmetology students at Rowan-Cabarrus Community College cut hair — a minimum of 8 inches was required — to donate to the Pantene Beautiful Lengths program. The hair is used for wigs and other hair prosthetics often relied on by cancer patients who undergo chemotherapy.

About 30 students — current enrollees and some graduates who come back for each Relay event — were giving start-to-finish haircuts Saturday.

The first person to donate her 8 inches of hair, which had been drawn back in a nice long ponytail, was Carly Tadlock. She did it in honor of her brother, 17-year-old Preston Tadlock, who was diagnosed with Hodgkins disease more than a year ago.

At last year’s Relay for Life, Carly gave 9 inches of her hair in honor of Preston, then let it grow again until Saturday’s cutting. Things are looking good for her brother, whose most recent scans have been clear.

The Tadlocks’ mother, Laura, has been working on Relay for Life teams since Preston was in a stroller. “Cancer does not discriminate,” she said. “… Cancer survivors have to trust God.”

Laura is proud of Preston, who sang the event’s opening national anthem and has been willing to give speeches and testimony about his own cancer fight.

“Preston will take the experience and help others,” Laura Tadlock said.

Next year, he plans to do his senior project at South Rowan High on cancer research at Duke University. Laura thinks her son also will end up helping others in the medical field.

The family attends First Reformed Church in Landis, and their T-shirts this year — as they did last year — made use of Preston’s initials — PMT. In 2015, the initials stood for “pray,” “trust” and “miracle.”

This year, the shirts proclaim  a victory of Praise and Thanksgiving on the Mountain — after having come through a valley.

Saturday’s profits from the T-shirts went into the Relay for Life pot.

In the best years, Relay for Life in Rowan County has raised up to $415,000, and Saturday’s pleasant spring weather helped to fuel a strong turnout.

“Mother Nature has smiled on us today,” Wagoner said, adding the event organizers don’t go into the Relay hoping to raise a certain amount of money.

The focus is more on spirit, compassion, fellowship, love and hope. Concentrate on those things, Wagoner said, and the donations take care of themselves.

Wagoner’s own mother is a 25-year survivor of colon cancer, but Crystal has lost many other family members to the disease.

“I don’t like things that scare me,” Wagoner said, “so I have to fight it.”

Relay for Life honored the family of the late Peggy Gibson Earle Saturday in the presentation of a plaque, noting her complete support in time and money of Relay for Life. Earle died earlier this year.

Over time, the Relay for Life events have forged many friendships. You could see it in the hugs exchanged Saturday between Lee Ann Freeze and Felicia Charles.

They met through Relay several years ago and have shared many “ups and downs,” Freeze said.

Charles’ mother, Kim Shepherd, is coming up on her ninth year as a cancer survivor, and when Freeze saw her Saturday, she delivered another hug.

Relays often seem like a big family reunion for cancer survivors and caregivers.

Back at the Friends for Life tent, Elizabeth Clark said this group started 10 years ago in memory of her aunt Janet Cauble, who died from cancer.

“It just kind of grew from there, because it (cancer) has touched all of us,” Clark said.

Early in the afternoon Saturday, the Friends for Life Relay team gathered in front of their tent for a group photograph. In the middle, smiling broadly, was Penny Barger.

She was simply reminding us all of one important thing: She’s not a wallower.