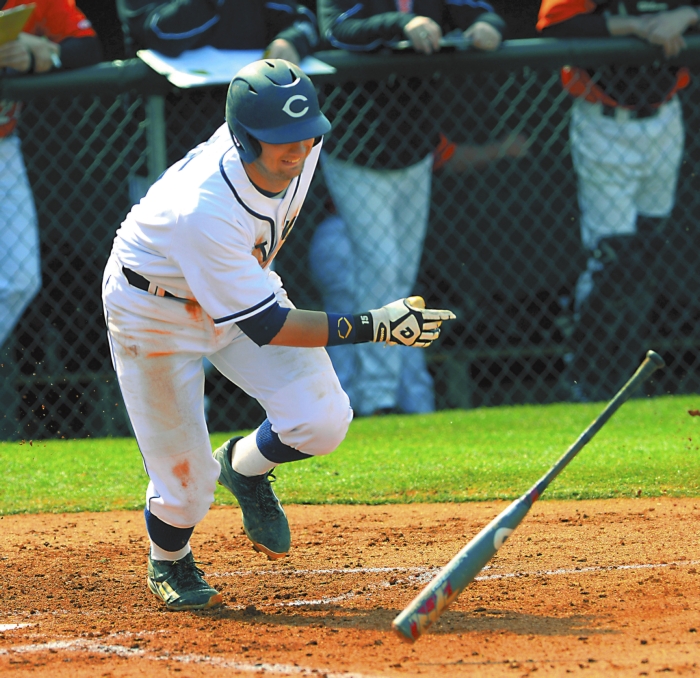 Wayne Hinshaw / Salisbury Post file photo Catawba’s Chance Bowden gets a hit during an earlier game against Tusculum on March 5. Bowden hit his 30th double Monday night against Tusculum, tying both school and conference records. Catawba lost 6-5, but Catawba and Tusculum were declared co-champions of the SAC tournament.

KODAK, Tenn. — Catawba and Tusculum were declared co-champions of the South Atlantic Conference Baseball Tournament after heavy rains caused the first of a possible two championship games to be called in the eighth inning.

Even though Tusculum won the first game, 6-5, here at Smokies Park, because a second game could not be played, Catawba earned the league’s automatic qualifier into the NCAA II Southeast Regional.

Baseball rules state that the trailing team must get their full three outs in an inning for the inning to count. So the eight runs that Catawba scored in the top of the eighth to take a 13-6 lead were erased after the Indians only recorded two outs in the bottom of the inning, when lightning caused a second delay and rains made the field unplayable.

Catawba drops to 34-18 and will face USC Aiken on Saturday before preparing for NCAA II regional play, which will begin on Thursday, May 19.

As far as what stats do count in the game, Tusculum jumped out to a 4-0 lead after two innings. A two-out error led to a first inning run, while the Pioneers got a RBI-double from Jeovanny Tolentino, who later scored on a wild pitch, and a RBI-ground out from J.J. Wesley in the second inning.

Catawba had just two hits over the first three innings, but Will Albertson singled to start the fourth and Chance Bowden doubled. It marked the 30th double on the season for Bowden, a sophomore, which ties both a school and conference record.

The Indians cashed in for a pair of runs on a sacrifice fly by Malachi Hanes and a double by Zach Almond. Catawba inched closer in the fifth frame on a Bowden sacrifice fly and took the lead in the sixth.

A one-out walk to Kyle Smith was followed by a single by Jeremy Simpson, putting runners on the corners. Jake Kimble would single home the tying run and Dylan Richardson hit a sacrifice fly to give Catawba a 5-4 edge.

The Pioneers had a lead-off single in their sixth and a hit batter put two runners on. Following a sacrifice, Jim Tolle’s grounder to first tied the game. Tusculum scored what would end up being the winning run in the sixth on a wild pitch with two outs.

That is where the game officially will end, erasing the eight-run eighth by Catawba. Smith had two hits in the eighth and scored a tying run on a ball by Kimble that got past the Pioneer third baseman. Luke Setzer put the Indians up, 7-6, on a grounder, just to the right of the first baseman, allowing Kimble to score from second base.

The big blow of the inning came off the bat of Albertson, who launched the first pitch he saw from Placido Torres, deep over the left field wall for a three-run homer and a 10-6 lead. Smith had a run-scoring hit for an 11-6 lead and two more scored before the inning was over. Avery Bowles got two fly outs around a single in the eight before the game was stopped and the inning eventually erased.