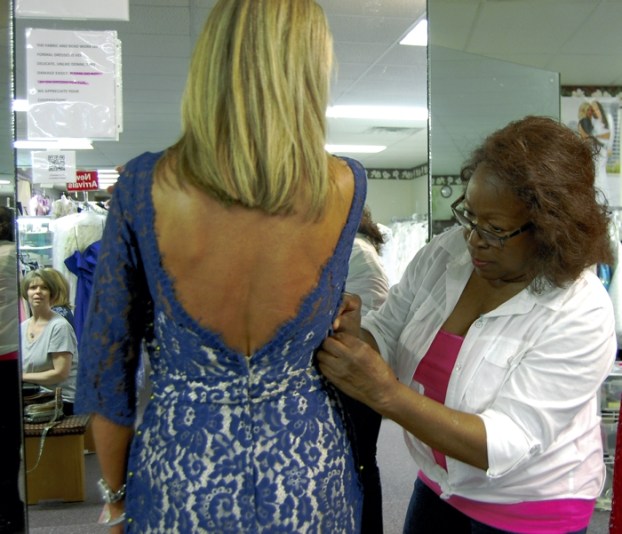 Amanda Raymond/Salisbury Post Seamstress Peggy Irving pins Wanda Long's dress, which she will be wearing to her son's wedding, at A Perfect Dress, a special occasion shop, in China Grove.

A perfect partnership at A Perfect Dress

CHINA GROVE — Prom season is the busiest season for the women behind A Perfect Dress, a special occasion shop in China Grove.

Brenda Neely, who owns the shop with her husband Aaron, walks back and forth to different places in the shop, from the women trying on dresses in front of the mirrors to those picking up their dresses at the front counter.

Peggy Irving, a seamstress for the shop, works in the back pinning a dress for a customer.

And there are people waiting in chairs near the front entrance, waiting for their turn.

“Ms. Peggy and I have our track shoes on from January to May,” Neely said.

Though they came from different backgrounds, Neely and Irving have been working together for years to make sure every customer walks out with the dress or tuxedo that fits them perfectly.

Neely and her husband opened the shop in 1992. She was a teacher in the education system for 32 years and taught in Rowan County for 29 years. Five years before retiring, she decided to open the shop for two hours a day in the afternoon.

Neely said she always had an interest in retail.

“(I was) just fulfilling a dream of retailing special occasion, bridal and prom attire,” she said.

The customers liked the later hours because they could stop by after work and after their children got out of school.

Neely has been in the community for so long that she is now starting to see the children of the students she has taught. Some ask what their parents were like when they were students.

Neely and Irving met around 1995. Irving moved to North Carolina in 1994 to take care of her mother.

Irving is originally from New York. She went to a fashion industry-focused high school and attended the Fashion Institute of Technology.

She then moved on to work in different facets of the high-paced fashion world.

Irving worked with designers such as Christian Dior and Mary McFadden.

“Basically that was my career, working with the top designers,” she said.

Irving created costumes for plays on and off Broadway for mostly black productions, including a musical tribute to the black musicians of the Harlem Renaissance called “Ain’t Misbehavin.'”

She even owned a boutique for about eight years.

After moving to North Carolina, Irving said since she had gotten older she enjoyed the slower pace of the south.

“I didn’t care to go back to the fast lane,” she said. “I just was enjoying the calm life of North Carolina by that time because New York is quite hectic.”

Today, the women strive to make sure the shop lives up to its name. Neely helps clients find the look they want for proms, weddings and other special occasions, while managing the day-to-day operations of the shop, and Irving makes sure the garments are custom-fitted to the client.

“Most of the time they’re too long and the fact that Ms. Peggy can custom-fit the dress makes all the difference in the world about the selection the girls make, how the final fit on the dress will make the dress look,” she said.

Irving said it is rare for a client to come in for a second fitting.

“A person can put on a garment that’s just falling off of them, and for them to come back and put it on, I love the pleasure of seeing them so happy with the way it’s fitting them,” she said.

Neely said a few customers can be hard to please, but for the most part the job is fulfilling.

“I enjoy seeing girls look pretty and the guys look handsome in their tuxes,” she said.

Although Neely said that every year she thinks she is ready to pack it up and make that year her last, every year she finds herself looking at the dresses she wants to order for the next season.

For more information, visit the shop’s website at aperfectdresscg.com or call 704-855-2427.

By Shavonne Walker shavonne.walker@salisburypost.com WINSTON-SALEM — This week, teens in the Piedmont area will have access to a new facility... read more