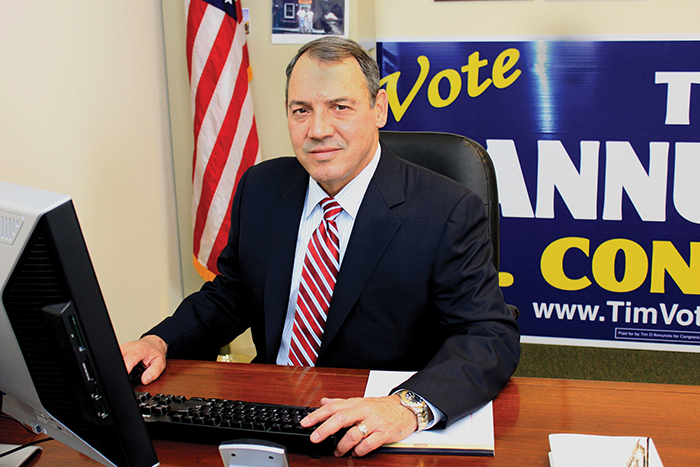 Submitted photo - Tim D'Annunzio is a businessman and candidate for the 8th Congressional District. D'Annunzio is a Republican who's challenging incumbent Rep Richard Hudson in the June 7 primary election.

If you give Tim D’Annunzio two minutes to tell you why he’s running for Congress, his response will likely focus on the need to enforce constitutional limitations on government.

D’Annunzio, a 58-year-old businessman from Raeford, is challenging incumbent Rep. Richard Hudson for the Republican nomination in the 8th Congressional District race. D’Annunzio spoke during a recent Rowan County Tea Party meeting. He was given more than two minutes to discuss his candidacy, but repeatedly stressed the importance of adhering to the government’s constitutional limitations.

“Typically I have two minutes to speak at events like this or most of the things I go to, and I try to identify the most important thing that I can get across to people about why I’m running and my obligations if I were to be elected,” he said. “For me, that’s to bring the federal government back into its constitutional limitations, back into that state where it isn’t the one that puts our rights under threat.”

During his opening remarks, D’Annunzio specified rights that are “put under threat” as life, liberty and property.

In 2010, he ran as a Republican for the 8th Congressional District. He advanced to a runoff election, but didn’t make it to the general election. His 2010 congressional race was particularly contentious. After securing a plurality of votes in the primary, D’Annunzio faced a barrage of criticism before the runoff. He was forced to address personal details about a criminal record and drug use.

In 2012, he advanced to the general election for the 4th Congressional District, but lost to the Democratic incumbent.

“They don’t believe in any laws whatsoever,” he said. “All of us know we are entitled to live in a state of absolutely liberty, but to live civilized we have to give up a certain amount of liberty. They’re not even willing to give up small amounts.”

D’Annunzio is an Army veteran who worked as part of the Army’s Golden Knights parachute team and as a freefall instructor. When he left in 1985, as a staff sergeant, he worked on parachutes at the Kennedy Space Center. He previously owned a manufacturing company that produced military and freefall parachuting products. He also has owned a multi-million dollar military equipment business. Now, he operates a freefall simulator wind tunnel.

When asked for his thoughts international trade deals, D’Annunzio said the measures often result in jobs moving overseas because wages are lower in other countries. He said America should renegotiate all of its trade deals and implement import tariffs that would raise the cost of goods to the equivalent of goods made in the U.S.

“In theory all of these trade deals sounded great, but now we’ve got the actual proof and the experience,” he said. “We’ve gone through that and we know that it didn’t work the way it was intended.”

As D’Annunzio continued, he addressed how to improve the American economy. If infusing cash into the economy stimulates growth, D’Annunzio said tax cuts would be the fastest method to improve America’s current economic state.

“Tax cuts would have an immediate effect on the economy and spur growth,” he said.

D’Annunzio said he supports abolishing the Department of Education and returning control back to state government.

“There’s no sense in us sending our money to the federal government, allowing them to take it disperse it around Washington, D.C., parts of it, and then send the rest of it back to us with the obligation that we have to do what they say,” D’Annunzio said.

When asked about national security, D’Annunzio said he supports building a border wall. He said one of the easiest ways for terrorist groups to enter the United States is by crossing the border.

D’Annunzio and Hudson will face off on June 7 in the Republican primary for the 8th Congressional District seat.

Snyder says views on torture, abortion separate him from…