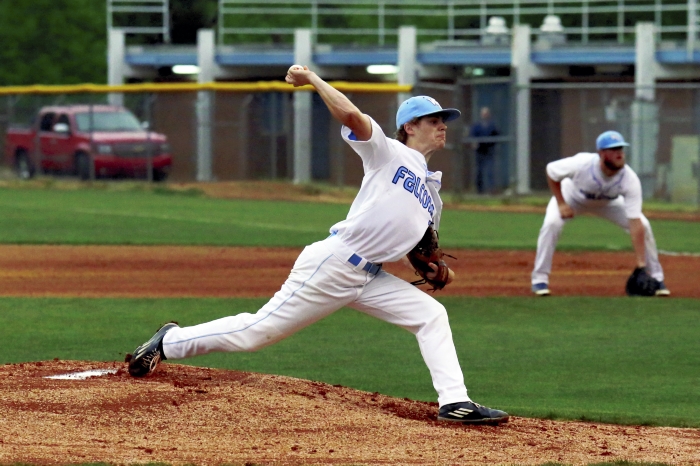 MOUNT ULLA — West Rowan starting pitcher Caleb Link allowed three leadoff doubles on Friday and still pitched five shutout innings.
Link defied the odds as well as Concord hitters, and his high-wire act led the Falcons to a 6-0 South Piedmont Conference victory. West coach Seth Graham acquired a few more gray hairs watching Link pitch his way into trouble, but Link held off the Spiders until West’s offense could break through.
“I don’t think I pitched all that well,” Link said. “But we played really good defense. Plus, a couple of times they hit it right where we needed them to hit it. That’s the truth. We couldn’t have planned it any better.”
It’s not like the Falcons dominated on a soggy night with sporadic showers. It was 0-0 after three innings and 1-0 after four frames.
West (18-4, 13-3) got two hits each from Brandon Walton, Jonathan Luther and Kacey Otto, but the Falcons also struck out 15 times against Concord hurlers Will Capron, a smart lefty, and Will Horsley, a right-hander who served some heat.
Both teams were facing their third league game of the week. Link (2-0) has established himself as a quality No. 3 pitcher for the Falcons.
“Link’s had some injuries (last year and this year) or he’d have a lot more innings under his belt than he does,” West coach Seth Graham said. “He did an amazing job tonight considering how many base runners Concord had and how many leadoff base runners they had. Concord has guys who can handle the bat. That’s a good offensive team.”
West stayed a game ahead of East Rowan in the SPC standings. Both teams have two games left to play.
Link got through the first inning with the assistance of the first of three West double plays, and he stranded a Spider at third base in the second.
Carter Mozingo doubled leading off the third, but the Spiders couldn’t get him home. Sam Rodgers walloped a double off the Blue Monster in left leading off the fourth, but that threat ended with a strikeout and a double play. The fifth brought more of the same, as the Spiders (8-12, 6-10) wasted Hunter Hinson’s leadoff double.
“We got men on base, but then we couldn’t execute,” Concord coach Shane Brown said. “Twice we had a runner at third with no outs and had the right guys at the plate, and still didn’t score. Credit their pitcher. When we got men on, he got ahead and he stayed down in the strike zone.”
It was an adventure for West to get on the scoreboard.
Walton nearly pulled a homer to right leading off the second, but Drew Yoos, a tight end who signed with Catawba’s football program, went back to the wall and made a great catch.
West broke through in the fourth. Brett Graham was hit by a pitch and made it to third when Otto lashed a pitch to the right-center gap. After an intentional pass to Walton filled the bases, Capron struck out two hitters. Luther was next. He tapped a roller toward third. Capron scrambled off the mound and fielded the ball, but when he slipped on the soaked grass. Luther had an infield hit, and the Falcons owned a 1-0 lead.
West’s five-run fifth inning broke it open. Olen Stamper walked to start the frame, and West had runners at second and third with no outs after Lee Poteat’s infield hit was compounded by a wet-ball throwing error.
Graham was next, and he delivered the game’s biggest blow, whipping a two-run single into center field for a 3-0 lead.
“We’d been out front against their left-hander all night,” Graham said. “Coach had just talked to us about how we needed to stay back and think up the middle. That’s what I did.”
Otto’s bloop hit kept things going and ended Capron’s night. Then Walton crushed a double to deep center against Horsley for his 21st RBI of the season. That made it 4-0.
“Walton can hit,” Coach Graham said. “He hit the ball hard against the lefty and then he stayed on some pitches from Horsley and showed he can handle velocity.”
When Concord threw home wildly on Trevor Atwood’s infield bouncer, it was 5-0. Cody LaRue drew a bases-loaded walk for a 6-0 cushion.
After Link hit the leadoff man with a pitch to start the sixth, Graham took the mound and immediately started a twin killing on a ball rapped right back to him.
“The double plays we turned tonight were big,” said Graham, who also pitched the seventh.
West, the defending SPC champ, heads into the final week of the regular season with a chance to repeat. The last time West won back-to-back league titles was 2003-04.
“We’ve put ourselves in good position,” Coach Graham said. “Now we’ve got to finish it.”
Concord’s Brown was impressed with the Falcons.
“This is my first year in this league and it’s the toughest league, top to bottom, I’ve ever seen,” Brown said. “West Rowan is very good. That’s a fundamental team.”