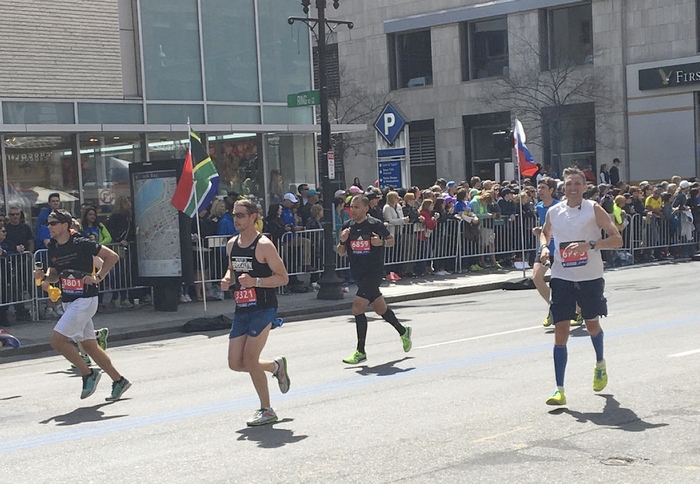 Stuart Perkins, at right, fought cramps while running in the Boston Marathon on Monday. Photo by Kim Perkins

Stuart Perkins had his race planned out, right down to his running pace for each segment of the famed Boston Marathon course. Perkins was excited about his chance to complete in the 120th annual running of the marathon on Monday. But he wasn’t so sure when he got to the starting area.

“It was just a big honor to be here today, and when I looked around at all the great runners, I wondered if I even deserved to be here,” Perkins said Monday afternoon after completing the marathon.

Perkins, like the other five local runners and approximately 30,000 more who ran in Boston on Monday, had bettered his age and gender qualifying standard in another marathon to attain his entry. He said,

“I was just happy to be here,” he said, “especially with all the history and recent bombings. We were actually in the Adidas store Sunday at the exact minute that the first bomb went off in 2013. They observed a moment of silence.”

The Boston Marathon participants run 26.2 miles from Hopkinton to downtown Boston, west to east. The 2016 version had temperatures in the 60s and calm winds at the start, climbing into the mid-70s with headwinds nearer Boston. The elite runners set conservative paces based on the expected forecast until they passed the midway point.

Lemi Berhanu Hayle, a 21-year-old Ethiopian, took the men’s title with a time of 2 hours, 12 minutes and 44 seconds. Another Ethiopian, 93-pound Atsede Baysa, took the women’s title in 2:29:18. American wheelchair athlete Tatyana McFadden took the women’s push rim title in 1:42:16 while Switzerland’s Marcele Hug paced the men in 1:24:02. Those times are unofficial.

While other world-class marathon courses are often flat and fast, Boston includes a series of challenging hills, mostly in the last half of the course. World-class runners often come to Boston to race tactically instead of expecting to set the fastest times.

Perkins planned to go out a little easier through mile 10 and then try to pick up his pace slightly.

“The rolling course was wearing on my legs, and by mile 15, I was experiencing cramps. I knew by that time that I wouldn’t have my fastest marathon,” he said. “By this time, the crowd was starting to get a little quiet, and I enjoyed giving high-fives to the kids along the way. That would get the crowd going.”

The crowds were estimated at near the largest ever due to the warm weather conditions.

“I noticed it was a little warm at the start,” he said. “By 8 miles, I was already slowing down. Cramping got worse, and I credit the crowd for carrying me to the Newton Hills. If I had it to do over again, I would have started slower. I kept doing my shuffles and eventually got to the finish. I was just happy that I finished because of the cramps and feeling lightheaded.”

Things got worse after Cornelius had finished. He passed out and was treated by paramedics and then taken to the medical tent.

“It’s OK though,” he said. “My mom got a picture of me on the stretcher. I will use that for motivation for next year and will definitely be back.”

For the running enthusiast, Boston is the place to savor the atmosphere and the energetic crowds. Famous runners are usually in the crowd and approachable. Yet the Boston weather is a factor that can often derail the best of marathoners. Recent years have included cold, hot, rainy and windy conditions.

“It was a tough day for running with lots of runners experiencing cramps,” Perkins said. “I stopped to see my family on Boyleston Street near the finish and also stopped to kiss the finish line. This had been such a dream for a long time that it became emotional for me. It was by far the best thing that I have been involved in. I had a blast!”

Freshness is king at the farmers’ market