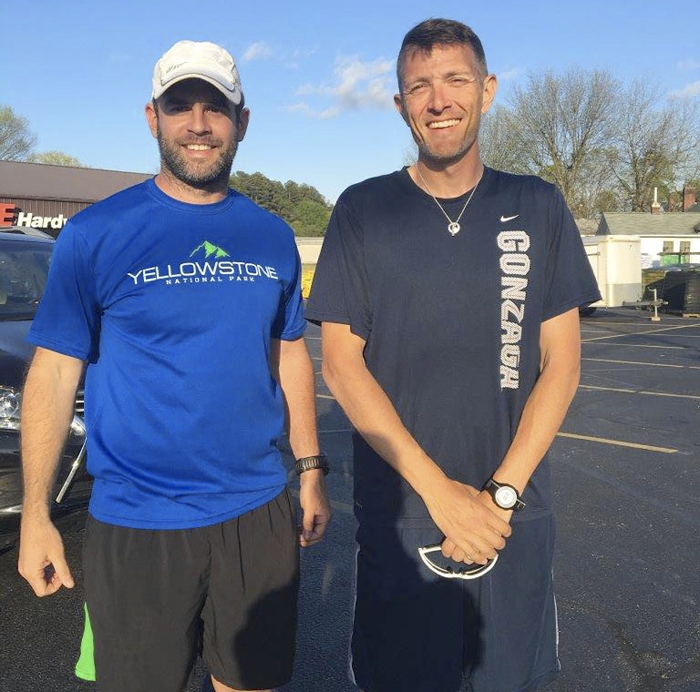 There are plenty of opportunities to lace up your running shoes for a challenging race or walk. This afternoon, head over to Knox Middle School for the Rock Your Sox at Knox 5K at 2 p.m. The proceeds will benefit school projects. Next Saturday, the West Rowan High School JROTC hosts the 100th JROTC Anniversary 5K on the high school cross country course. At the same time, just down the road at the South Rowan YMCA, there is the Down and Dirty Adventure Run. Hard core folks can work it out to do both.

Speaking of hard core, Jessica Stamper from The Forum competes tonight on CMT at 8 p.m. against seven other women from around the country. It is called the “Stone Cold Steve Austin Broken Skull Ranch Challenge.” Jessica trained by pulling a jeep around the parking lot and carrying logs. It all sounds like great fun to me, but only to watch.

Two of my friends are already in Boston, Mass., for the 120th running of the famed Boston Marathon. I think they make a great story because they are training partners of similar ability and demeanor. Both are extremely competitive and serious about their sport.

Just a few words about the Boston experience from my point of view. Long thought of as the world’s most famous 26.2-mile race, it is a point-to-point run from Hopkinton east to downtown Boston. The marathon passes through several small towns along the way and the course is lined with spectators. But what sets the Boston Marathon apart is the qualifying requirements based on age and gender. Though those standards have been relaxed somewhat, they are still restrictive enough that this is the race for serious marathoners. Just getting into Boston and competing against top-quality runners from around the world makes the experience so special.

Adam Cornelius is already one of Rowan’s best marathoners. At last count, he is one of 11 local men to have completed a sub three-hour marathon. This year, Adam hopes to break three hours on the historic course after qualifying with a time of 3:01:21 during last year’s race. Adam tuned up with a 2:59:28 at Kiawah Island this past December. Boston will be Adam’s eighth marathon and third Boston.

After setting recent personal bests in the 5K and 10K, Adam also had a half marathon best of 1:22:01 on a warm day. While these racing times would seem to have him ready to break 3 hours at Boston for the first time, Adam isn’t so sure. He said, “I usually like to take a couple of months off from hard training and just run. I just don’t feel that my training has been adequate. Part of me just wants to take it easy and take in the Boston experience, but I feel that would be a disservice to all of those who trained hard and couldn’t get into the race.”

Adam and his parents arrived in Boston on Saturday. Adam said, “I believe they have only missed one of my marathons.”

Stuart is running his fourth marathon and his first Boston.  He said, “To be able to compete in Boston this year is a crowning achievement of my personal goal. I honestly never thought that I would be able to qualify because of the difficulty. For about two years now, my training has been centered on one goal — making it to Boston. When I struggle to get out of bed for a training run or want to cut a workout short, I see the finish line at Boston.” Stuart qualified for Boston with a 3:07:29 finish at the Anthem Richmond Marathon.

“My goal in every race is to PR. Breaking my personal record would be awesome, but in the end, I am humbled just to make it to Boston. It is an honor to be able to run with such elite runners from all over the world,” Stuart added.  He traveled to Boston on Friday with wife Kim, daughter Camryn, and son Corbin.

Finding a training partner is much harder than most people realize. Goals and pace are hard to match up and many other factors can cloud the mix. Stuart and Adam have made it work, and the results are paying off. Adam said, “Last fall, I was in the best shape of my life. Stuart was a huge help. We did intervals and tempos together. Without him pushing me, I know that I wouldn’t have been as fast. I hope he continues the way he is running, because we both can get a lot faster if we push each other.”

Stuart added, “We have been running a course in the Rockwell area. The first 9 miles are flat and the next 10 are absolutely brutal. Up and down with extreme elevation changes. Hopefully, this will help us out with ‘Heartbreak Hill’ in Boston.” Heartbreak Hill comes late in the race, just before mile 20 and is the culmination of three hills.

On Monday, I have the assignment of watching the Boston Marathon and will submit a story on the race and how the locals do. Other known Boston participants this year are Dr. Victor Rosado, Debbie Dickson and Josh and Maleah Pinyan.

It is a special race to run and also to watch. The Universal Sports Network and NBCSN are carrying the race, with the start at 10 a.m. Forever remembered for the 2013 tragedy near the finish line, this year’s event will have about 30,000 runners.

Stuart said, “The hay is in the barn, the training is done.” Adam added, “It has been an incredible experience the last two times. Words cannot describe what it is like to run Boston!”