‘Beautifying women, inside and out,’ new wig store open downtown 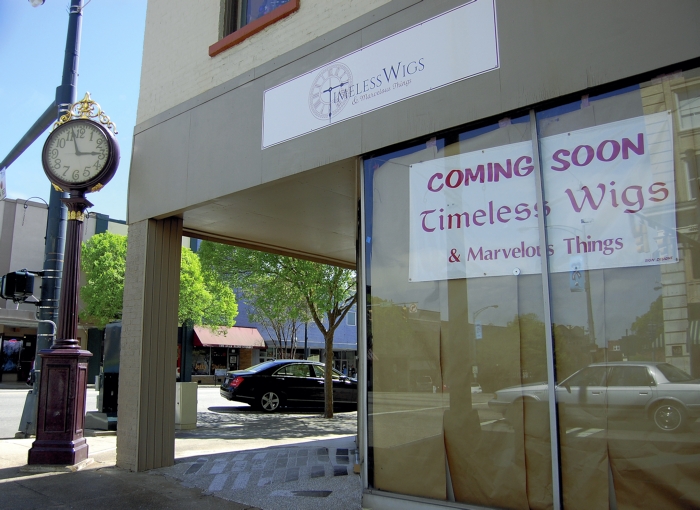 A new wig shop is opening today in downtown Salisbury with a goal to encourage and support the community.

Dileika and Marva Wilson are opening Timeless Wigs & Marvelous Things at 100 S. Main St., where OK Wigs used to be.

They are renting the space from Kap Yang, who ran OK Wigs for more than 40 years.

Dileika Wilson said Yang and his wife have been very willing to give them advice and pass on their knowledge.

“OK Wigs had been a staple in the Salisbury community … When we spoke about what we would do we wanted to still honor that,” Wilson said.

Wilson and her mother are originally from Panama. They moved to Salisbury in 1999, according to Marva, or 1998, according to Dileika. Either way, they both agree Salisbury has been the longest place they have lived in. Dileika’s father was a physician in the army, so they moved around a lot.

The family settled in Salisbury when Dileika’s father got a job at Mid Carolina Cardiology, which is now part of Novant Health.

Dileika Wilson, who has a master’s degree in human resources, said that her mother has been friends with the Yangs for a long time and offered them the space. Wilson said it was a good way to expand on their ministry.

Wilson said her mother leads a women’s ministry at their church. She herself is a six-year cancer survivor.

They plan to use store to offer wigs to the community, from those suffering from cancer or alopecia to people who just want to change up their hairstyle.

“I look at it as a ministry,” Marva Wilson said. “Beautifying women, inside and out, and not just women.”

Dileika Wilson said they also hope to partner with the community to do things for breast cancer and heart health awareness, and also offer workshops and resumé help.

She also wants to encourage people during day-to-day interactions with customers.

“An avenue like this gives you that opportunity. People come in and they’re looking for a wig or a hat or a suit, but you end up speaking and touching each others lives,” she said.

Wilson and her mother gave the space a makeover. There are new wood floors and they moved a wall back to allow more room on the main floor. They also added fitting rooms, a couch and inspirational quotes on the walls that say things like, “Be your own kind of beautiful.”

“My mom and I think that we’re alike in the fact that we’ve never met a stranger. We speak to everyone and smile at everyone and it’s genuine,” she said. “And so we want people when they come in to feel like they walked into a big hug.”

They do not just offer wigs — there is also jewelry, shoes, clothes, scarves, church suits, hats and gift items.

“We’re still stocking and looking for things that fit with us and our brand and what we’re trying to do,” she said.

Wilson said the store is definitely a family affair, with her mother as the co-owner and her siblings also helping out.

Marva Wilson said the store will be all about making people’s lives better.

“Our presence here, between mother and daughter, we hope we can make an impact and make a difference,” she said.

Salisbury man one of two bodies found in Davidson…