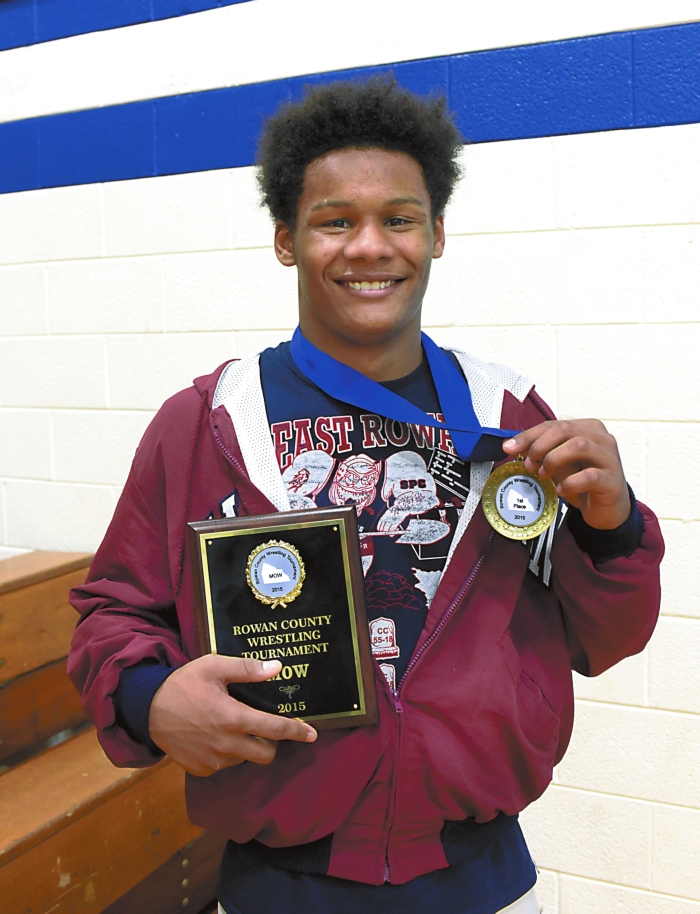 GRANITE QUARRY — East Rowan junior Max Wall’s philosophy on the mat isn’t complicated.
“Stay calm and wrestle hard,” Wall said. “Even if I’m wrestling a state champion, I don’t get all that hyped up. You have to listen to coaching and stay calm.”
Staying calm worked well for Wall this year. The 170-pounder went 46-8 and finished fifth in the 3A State Championships in Greensboro. The two-time county champ was presented recently with the Dutch Meyer Award, a trophy that goes annually to Rowan’s top wrestler.
It’s quite an honor for a junior to be recognized by coaches as the county’s best. Carson’s Brandon Sloop won the award in 2015. Wall is East’s first Meyer honoree since Mark Almeida in 2012.
“I never knew anything about the award until I received it, but it’s a great honor, and I’m grateful to everyone responsible,” Wall said. “I was proud of the junior season I had because I wanted to keep my losses in single digits, and I was able to do that. I believe I lost 13 matches my freshman year and another 13 my sophomore year. Now I plan to do better next year.”
Wall’s efforts helped East put up a great season in coach Barry Justus’ last rodeo. East won the Rowan County Championships and fell just short of a third straight South Piedmont Conference title. In his final season, Justus sent nine seeded wrestlers to regionals and four advanced to the state championships.
Justus was voted the winner of the Ralph Shatterly Award that goes to Rowan’s top wrestling coach.
While Wall lost eight times, some of those setbacks took place in major weekend tournaments against wrestlers from all classifications. Wall placed fourth in the Tab Thacker Invitational at West Forsyth and third at the Holy Angels tourney in Charlotte.
“Max makes some mistakes, like all wrestlers do, even the ones who get to the state level,” Justus said. “But he’s got a great attitude, he works hard in practice, and he doesn’t like to lose.”
Wall said his strength is his biggest asset on the mat.
That strength, combined with outstanding speed, makes him one of Rowan’s most talented, most versatile and most accomplished athletes.
Wall already has enjoyed a phenomenal three-year varsity football career for the Mustangs. With 2,632 rushing yards, he’s on the brink of breaking Cal Hayes Jr’s school record of 2,698 yards that was set in 2001. Wall also has caught 78 passes. He’s scored 24 rushing touchdowns and 10 receiving touchdowns, and he’s even thrown eight TD passes.
In track and field, Wall will be a factor for the Mustangs in next week’s county championships in the 100, the 4×100, the long jump and the triple jump.
But as far as this week, Wall’s focus in on wrestling and the prestigious award he took home.
“The great thing about Max is he’s got another year,” Justus said. “He’s got one more year to wrestle that perfect match and win a state championship.”