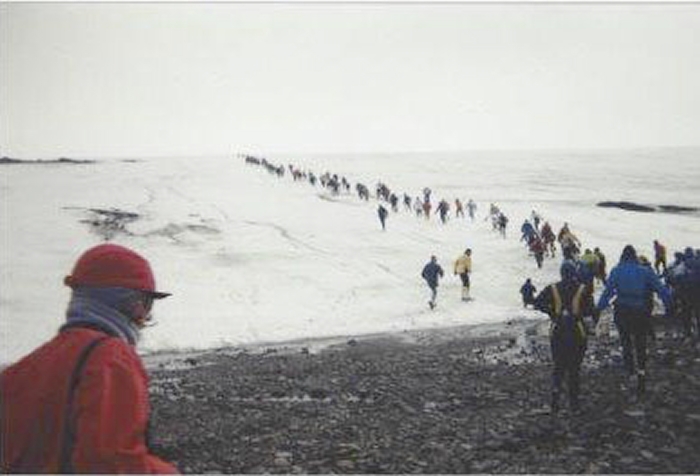 We have some interesting and different races coming up in the next few weeks. A street and greenway 5K, an adventure mud run and a cross country 5K. Here are a few words about the choices. First up is the Rock Your Sox at Knox 5K on Sunday afternoon, April 17. Come show off your socks and race the popular greenway course, headquartered at Knox Middle School.

Then, Saturday, April 23 has the two very different options. The Down and Dirty Adventure Run starts things off at the South Rowan YMCA. Various waves of start times are available and participants will be challenged and get as dirty as they want. Across the county at West Rowan High School is an unusual cross country 5K, the JROTC 100th Anniversary Fun 5K. JROTCs across the United States have scheduled 5Ks that will all start at exactly the same time. The local event gets the starting horn at 11 a.m. So, if you are serious enough for a real challenge, get an early start time at the South Y and then hustle over to West Rowan High.

Plenty of additional information on these events and more is available at www.salisburyrowanrunners.org

While I have traveled extensively to complete 24 marathons, nothing that I have done compares with Dan Roseman’s journey to Antarctica for one of the most challenging marathons ever. Dan read about the first ever Antarctica Marathon in 1995 and the second one in 1997. An avid trail runner, the unusual challenge of this event seemed interesting to Dan and also to his nephew, Micah Roseman. They made plans for a two week journey by plane and ship with 26.2 miles of running in the middle.

Training was much the same as for any other marathon, beginning in August of 1998 and ending in the middle of winter here. February is summertime in Antarctica, but Dan said, “It helped to get some training here in the cold but nothing could have prepared me for the terrain that we would experience during the race.”

The Rosemans flew to Miami, where they met the other 150 runners, from a total of 16 countries, who made up the race entrants. Next was a long flight to Buenos Aires, where they spent a short night. With little sleep, the Rosemans flew to Ushuaia, Chile, the southernmost city of the world. Dan said, “The climate was similar to Alaska. Our hotel was halfway up a glacial mountain, with snowy peaks behind us and the Beagle Channel down below. That is where we would board the ship for Antarctica.”

After a side trip to see condors and a view of the Chilean Andes, the runners were loaded on a Russian research ship rated for ice travel. Dan said, “We had a small room with two bunks, a sink and chair. The porthole was open, making the room a cool 45 degrees. We left port facing winds of 60 mph and 30 foot seas. A lot of the runners were carbo-unloading when they should have been loading.”

Only the captain of the all-Russian crew spoke English, and meals were very basic on the two-day trip. Exercise was limited to walking the deck and occasional zodiac (inflatable boats) trips to land. Dan said, “We were able to walk among thousands of penguins who were unafraid because they had never seen humans. We saw whales, leopard seals and furbearing seals.”

One week after leaving Charlotte, race day dawned at 32 degrees and a wind chill of about zero because of 30 mph winds. A half-mile zodiac ride took the runners to the Uruguayan research station for the 9:30 a.m. start. Snacks and water were dropped off along the two laps around the island course. Dan said, “We were able to run very little. The course started on a rocky beach and quickly turned up a mountain with about eight inches of snow and ice. Most people had to walk along a glacier and we had to battle 40 mph winds near the turnaround. With controlled sliding, we navigated the big snow.”

The inland portion of each loop consisted of rock paths, steep hills and extreme mud. A wrong turn added an extra portion to the course as they passed the Chilean research base on the way to the Russian base. A return to the Uruguayan base began the second lap, where Dan used the opportunity to change to dry socks and shoes. He also had lost track of Micah by this time. One unusual aspect was the presence of skuas, a chicken-sized bird with a nasty temperament that often dived down to peck the heads of the runners.

Dan said, “I had set a goal of six hours and time was running out. I jogged up the hills and flew on the downhills. The last six miles were my fastest, allowing me to finish in exactly 6:00:00. Micah, at 17 years old, was the youngest to finish the course through the third year.”

After 35 years of running, Dan Roseman now has approximately 40,000 miles completed. He and his wife Pam, an accomplished runner, triathlete and cyclist, ran the equally daunting Death Valley Marathon for their 10th Anniversary.

April 18 is the 120th Boston Marathon. Next week, I will have a list of all the known locals who are competing and some special thoughts from at least two of the competitors about their preparation over the last several months. On Tuesday morning, I will have a special post-race report including results.

I hope to see you out running or walking this week!

What lies do we tell in the name of…