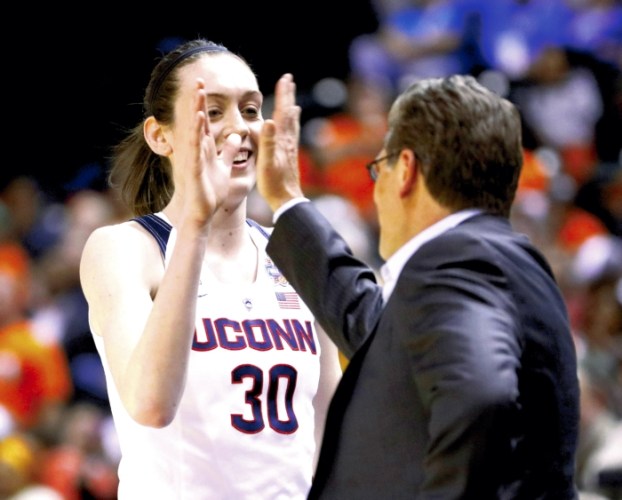 Connecticut's Breanna Stewart (30) is greeted by head coach Geno Auriemma as she is taken out of the game during the second half of a national semifinal game against Oregon State, at the women's Final Four in the NCAA college basketball tournament Sunday, April 3, 2016, in Indianapolis. Connecticut won 80-51. (AP Photo/AJ Mast)

INDIANAPOLIS (AP) — Breanna Stewart came to UConn with the lofty goal of winning four national championships and the Huskies are now just one victory away from history.

They will play former Big East foe Syracuse on tonight with a chance to become the first women’s team to win four straight Division I titles. Only UCLA, with seven in a row from 1967-73, has done it on the men’s side, and a UConn victory would give coach Geno Auriemma 11 national championships — one more than Bruins coach John Wooden for the most ever in the history of college basketball.

While Stewart didn’t guarantee four titles when she was a freshman, she did promise a victory against Syracuse.

“I’m not going to go and say that we’re going to lose,” Stewart said after the Huskies beat Oregon State in the Final Four. “To end my college career, to end it with the other seniors, there is no other way that I want that to happen.”

Syracuse coach Quentin Hillsman wasn’t planning on using the comments as extra motivation for his team.

“I don’t think she knew who she was playing yet,” he said, laughing. “So what is she supposed to say? I told our fans and our crowd that we’re going to win, too.”

Auriemma shrugged it off.

“Having said it and now being on the verge of being able to do it, those are amazing things that it’s like a storybook,” Auriemma said. “You have to admire her. She’s got a lot of guts, Stewie does. And you know what we talk about on our team a lot is courage. And it takes a lot of courage sometimes to say certain things and to be able to do certain things.”

Stewart and her fellow UConn seniors have won 74 straight games and have never lost in the NCAA Tournament, going 23-0. To win the title, Stewart and the Huskies will have to beat her hometown team.

“It definitely feels like it’s coming full circle,” Stewart said. “From my freshman year, when we played in the Big East, we played against Syracuse. Following that, there was no Big East, so we obviously didn’t get to play them and now having an opportunity to finish it off against them.”

The former Big East foes met at least once a season before the Orange went to the Atlantic Coast Conference after the 2013 season. The Orange have lost their last 23 meetings against UConn, a skid that dates to 1996.

“I’ve been on every possible end of the spectrum of a UConn game, on a regular-season game, in a Big East Tournament game, on senior night at their place,” Hillsman said. “I think teams get overwhelmed with their speed and quickness and their strength. It is an overwhelming thing because they’re very good, but at least we understand that because we’ve seen it and we’ve experienced it.”

“I think at this time of the year your confidence level and your ability have to mesh,” Auriemma said. “There’s teams maybe that come here with a lot more confidence than ability and it catches up to you or a lot more ability than they have confidence. So when those two things mesh, I think you have a pretty unbeatable combination.”

Auriemma also said that it helped having players like Diana Taurasi, Maya Moore and Stewart.

“Three people are directly responsible for eight of them,” he said. “So when you’ve got those three in your lineup, Stewie, Dee, and Maya, at this time of the year, generally speaking, if you have the best player on the floor, good things can happen.”

UConn will be without freshman Katie Lou Samuelson, who broke her foot in the semifinal win over Oregon State.

“It’s definitely tough,” she said. “I’ve been working so hard this season. It’s kind of a bummer that it’s got to end this way, but I know my team is going to be out there and just play as hard as they can and I know they can do it.”

Hillsman said Syracuse men’s coach Jim Boeheim has been one of the team’s biggest fans. While he didn’t think Boeheim would be at the game Tuesday night, he has been offering support.