Amy-Lynn Albertson: Fire ants showing up all over 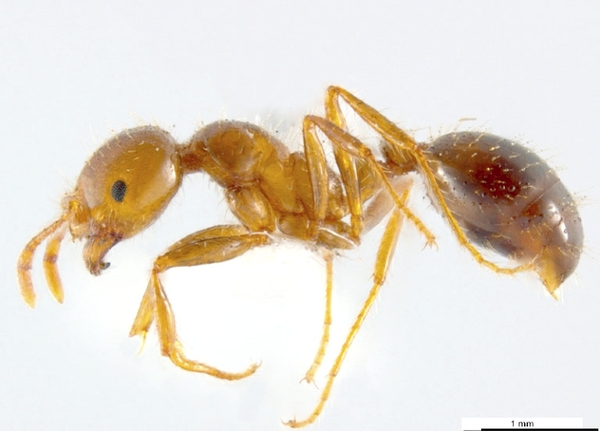 Pest and Disease Library/Bugwood.org A closeup of a red imported fire ant.

If there is an insect I hate more than a cockroach it’s the red imported fire ant. The mild winter and spring warm-up has led to an explosion of colonies everywhere. I stepped in one the other day at the office.

Fire ants cost Americans $6 billion a year, including the cost of insecticides. The two-step method and other approaches described here can lower that cost while reducing environmental damage and improving fire ant control. Knowing your options will allow you to make better choices to protect your family, pets and property.

Fire ants will build their mounds almost anywhere — in the open or next to a building, tree, sidewalk or electrical box. A fire ant mound does not have a central opening. Fire ants emerge quickly and begin biting and stinging when the mound is disturbed. They will even run up vertical surfaces. At my house they like to build mounds all along our driveway.

Worker fire ants are dark reddish-brown with shiny black abdomens, and are about 1/16-inch to 1/4-inch long. Fire ants are similar in appearance to many other ants, so make sure you have correctly identified the species before attempting to solve your ant problem.

Fire ants are very aggressive and will attack anything that disturbs the mound; other ants will usually just run away. Another way to know for sure if you have fire ant is to put out a potato chip near the mound or some cat food. Fire ants are attracted to greasy foods and will locate it quickly to take back in the mound.

Most people (about 80 percent according to one survey) try to control fire ants by treating individual mounds. Mound treatments are expensive, up to $2 or more per mound, and require lots of time and labor if you have much land to treat. You can easily use too much insecticide, which may lead to environmental contamination if rain washes the insecticide into lakes and streams.

To be effective, the mound treatment must kill the queen(s). Otherwise, the colony will survive. Some nests may go undetected. Even an area where every mound has been treated can soon be re-infested by fire ant colonies migrating from untreated areas or floating there on flood water. Deep-dwelling colonies that escaped mound treatment can quickly form mounds after a soaking rain. It is usually more effective and less expensive for homeowners to treat the entire yard with a product designed for broadcast application.

The two-step method is the most cost effective and environmentally sound approach to treating medium to large landscaped areas. The first step is to broadcast a bait once or twice a year to reduce fire ant colonies by as much as 80 percent.

The second step is to treat nuisance mounds or colonies that move into the bait-treated areas. The bait you apply determines how quickly ants will be controlled and how long the effect will last. Faster acting bait products include indoxacarb (works in 3-7 days), metaflumizone (works in 7-10 days), hydramethylnon (works in 7-14 days for mound treatments and in 2-3 weeks when broadcast), and spinosad (works quickly on foraging ants but may take several weeks for reduction in mound activity).

Individual mounds may be treated with a liquid or dust insecticide formulation or with an insecticidal bait. Liquid treatments may be done by rodding the chemical deep into the mound or by drenching the mound. To be effective, the drench must trickle down through the mound and contact most of the fire ants in the colony. Ants contacted by the drench die in less than 24 hours. Drenches are the preferred treatment when the risk of human contact with fire ants is high and the fire ant infestation must be eliminated immediately because of the health risks of someone getting stung.

High-risk areas include home lawns, school grounds, parks and other areas frequently used by the public. Best control results are usually obtained in spring and fall when temperatures are between 70 and 85 degrees.

For more information on fire ants or other horticultural topics please contact the Rowan County Extension Center at 704-216-8970 or on the web at http://rowan.ces.ncsu.edu

Recommendations for the use of chemicals are included as a convenience to the reader. The use of brand names and any mention or listing of commercial products or services does not imply endorsement by North Carolina Cooperative Extension nor discrimination against similar products or services not mentioned. Individuals who use chemicals are responsible for ensuring that the intended use complies with current regulations and conforms to the product label. Read and follow all label directions when using any pesticide.