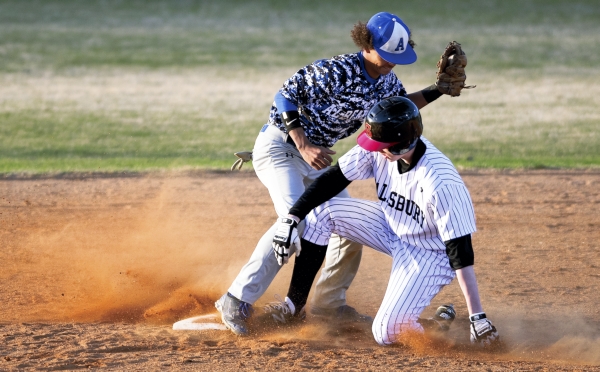 ALLISON LEE ISLEY/SALISBURY POST ... Salisbury’s Alex Link (12) steals second base during the fourth inning of Wednesday’s game against Albemarle. Link also stole third base and Salisbury had 12 steals in the game, a 12-2 victory.

SALISBURY — Salisbury pitcher Joe Steinman knew he had one primary mission on the mound Wednesday night at Robertson Stadium and based on the results, it was definitely mission accomplished.

The sophomore right-hander limited the Albemarle Bulldogs to four singles and walked only two as the Hornets (4-4) cruised to a 12-2 non-conference high school baseball win, thanks in large part to a nine-run fourth inning.

“It was my job to just throw strikes, let the defense work and catch a rhythm,” Steinman said in improving to 2-0 for the season. “We missed a couple of plays early  but we cleaned it up and then got some key hits when we needed them.”

Steinman is quick to admit he does not overpower hitters so pitching to contact and trusting his defense is important.

“Joe did just what we needed tonight,” Salisbury coach Mike Herndon said. “He threw strikes, did not walk anyone and let his defense back him up.”

While Steinman was controlling the winless Bulldogs (0-7) on the mound, the Hornet offense finally figured out Albemarle lefty starter Mason McGowan in the decisive fourth inning by sending 12 batters to the plate, scoring nine runs and scorching a couple of extra base hits with runners on base. It turned a precarious 3-1 Salisbury lead into the 12-2 victory halted in the middle of the fifth by the 10-run rule.

“He (McGowan) was throwing strikes but we were just not adjusting to his speed,” Herndon noted. “We just kept swinging through it.”

But that all changed dramatically in the bottom of the fourth as McGowan went to a full count on five straight batters, fanned one, walked three and gave up an RBI-single to Griffin Myers.

The bases were loaded with one out when freshman catcher Bo Rusher notched the key hit of the game as he boomed a double to deep right that caromed off the top of the fence and cleared the bases. It gave Rusher his team-leading 10th RBI of the season. After Harrison Smith walked and John Yang singled, designated hitter Alex Link greeted new pitcher Tyler Lee with a triple, deep into the right field corner, making the score 11-1. Hut Smith added another run with a sacrifice fly to center field.

The Bulldogs did load the bases in the top of the fifth inning off Steinman on a walk, single and an error, then made it 12-2 on an RBI-groundout by Kolby Kluttz. But Salisbury closed it out on a fielder’s choice grounder to second base.

“We are a young team and are just building our program back up,” said first -year Bulldog coach Tim Silsby. “Right now, we have a good attitude and are getting better every day. Salisbury is a good team and I thought we played well until the end.”

Salisbury never trailed in the game, taking a 3-0 lead in the first inning in unconventional fashion.  Will Steinman led off with a slow dribble single to the right side, then promptly stole second and third bases. Back-to-back walks were followed by a double steal to make it 1-0. Then a throwing error by the catcher on another steal and finally a wild pitch upped the margin 3-0.

The Hornets recorded five stolen bases in the first frame that set the tone for a remarkable 12 stolen bags for the game, including three each by Will Steinman and Myers.

The win was the second in as many nights for the Hornets who will now play a crucial Central Carolina’s Conference rematch at East Davidson tonight. Salisbury is seeking to sweep the Golden Eagles after a whacky 10-9 win in nine innings on Tuesday.

“We are looking forward to that game because our guys like playing them and we can get a jump in the conference standings,” Herndon said.

In the six-team CCC, a couple of league wins right out of the gate would be big. The Hornets will likely go with senior Will Steinman on the mound. The game is set for 6 p.m. at East Davidson.