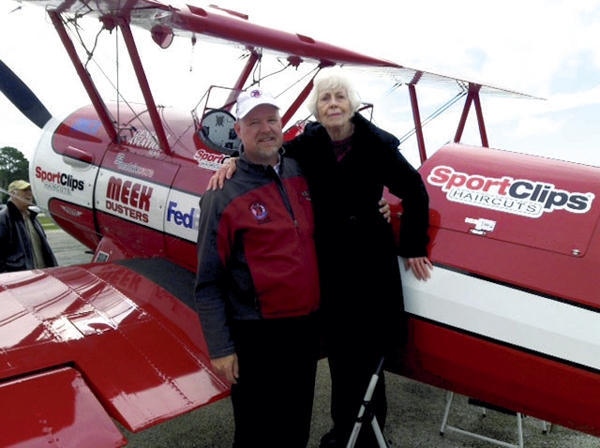 Nearly three years ago, I met Darryl Fisher. I knew from several sources that Fisher’s organization, Ageless Aviation Dreams Foundation, travels the country giving flights to military veterans. AADF came to the Rowan County Airport with prior arrangements to serve the veterans at Oak Park Retirement. I considered myself lucky to be covering the story for the Post. Two of my favorite things were in the same place; a vintage plane and military veterans.

Instead of staying an hour or two to do the basic story on these flights, I found it hard to leave. It was fun to meet and visit with the veterans as they waited for their flights and often even better to hear their reactions afterwards. During all the fun, I got several chances to talk with Fisher and learn more about how Ageless Aviation Dreams came about and where he thinks it is headed.

Always present were lots of smiles and plenty of laughter. Time was turned back and steps were quicker as each veteran climbed in and out of the open air cockpit. The ground crew took numerous pictures, the first of which was just after each veteran was belted in and ready to fly. Families attended and spectators stopped by. It was the right place to be.

I was so impressed with AADF that I gave Fisher a copy of my first two books. He is based near Carson City, Nevada, and knew about lots of the areas that I’ve cycled. Fisher said, “Maybe what we are doing here might make a good book. What do you think?” That suggestion turned into an agreement where I will write the book, much of it about the organization’s beginnings and flights scheduled for 2016. I will be traveling with AADF at various times throughout the year.

My first venture as part of the all-volunteer AADF began last Wednesday in San Antonio. Both Fisher and I flew there commercially with the intent of picking up one of the Boeing Stearman biplanes from its wintertime storage. We caught a ride with another AADF volunteer to the historic Stinson Airport, first used in 1915, with hopes for a break in the heavy rain and low clouds that battered Texas most of the week.

Our red and white Stearman was built in 1943. Virtually all World War ll aviators got their initial training in these planes of which less than 11,000 were built. One source says that 300-400 remain.

Our plane was last flown in November of last year, when all of the AADF biplanes were shut down for the winter. The planes travel out of different locations around the country from March until November, all the while taking veterans and veteran’s widows on dream flights. Last year, Fisher’s organization gave out 650 flights and hopes to provide 700 this year. There is no cost for the flights and Fisher credits the AADF’s sponsors for that fact. Sportclips is the foremost of those sponsors and often provides volunteers to assist during the actual dream flights.

The poor weather in San Antonio seemed to improve as the rain stopped and ceiling lifted slightly. Fisher is adept at studying the radar and knowing the limits of flight in his biplanes. Of course, I am not an expert on these things but always look forward to another adventure. We planned to try to fly approximately 120 miles to Houston that afternoon. It is near the top of cool to fly in one of these planes by the way, so I hoped we could make it. A long list of scheduled dream flights were set to begin Thursday morning at the Pearland airport and we needed to get there. Light rain began to fall again as we took off and headed east into a headwind. Fisher likes to fly at about 1,000 feet in altitude but that wouldn’t be the case on this day. We kept flying into a lowering ceiling until it looked like the clouds were just above the ground. We had to turn back after just 40 miles and return to San Antonio.

More rain and clouds remained on Thursday morning, but once again there appeared to be a window between some of the worst storms. After about 60 miles, Fisher decided to land at Gonzalez, Texas, where a very small self-service airport gave us a place to wait out another low ceiling. Back in the air about an hour later, we finally made it to Pearland at just before 1 p.m., in time for the first rescheduled dream flight.

An afternoon of flights went well and just left us enough time to get the plane to Hooks Airport near northwest Houston. The 30-minute flight in the cloudy twilight gave beautiful views below as the lights twinkled on. Shortly after we landed, the rain began again. The main runway and lots of the surrounding fields were already flooded and the forecast was spotty for Friday.

Light drizzle and heavy clouds slowly began to lift early on Friday and sun was predicted for a good portion of the afternoon. That forecast came true and another group of veterans got their flights.

Highlights of those veterans that we met included a 93-year-old Marine who fired a rifle at the Japanese Zeros who were bombing Pearl Harbor on Dec. 7, 1941, and a 94-year-old female WWII Women’s Airforce Service Pilot. But every story is amazing! Just as Fisher said several times, “We only get paid in satisfaction and often we are overpaid!” It was great to be part of this and I can’t wait to do it again.

Ride for Jesse: Pastor says, ‘I can’t help my…