Michael Bitzer: Who will vote in NC primary? 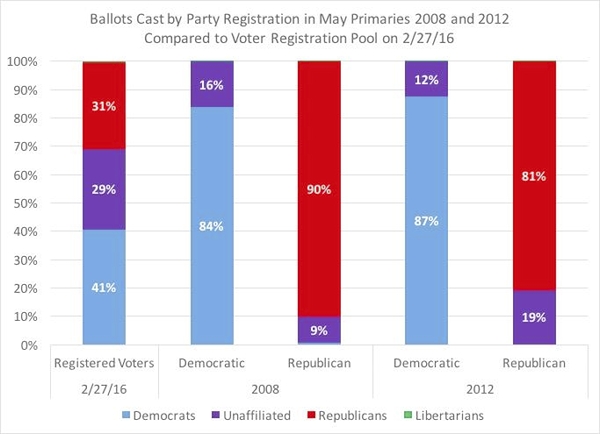 Current registration, far left, compared to ballots cast by party in 2008 and 2012 May primaries in North Carolina.

The key questions throughout the prior primaries and caucuses have been about the electorates’ composition. With the notable influx of voters into the Republican presidential primary and the clear distinction between Hillary Clinton and Bernie Sanders when it comes to Democratic primary voters’ age and race, who shows up in Tuesday’s primary will be a key question.

One of the key differences in looking at past North Carolina primaries is that they were held in May, usually near the tail-end of both parties’ presidential battles. In 2008, the Democrats were locked in a competitive head-to-head with Obama holding a slight delegate lead over Clinton, while in 2012, Romney was able to solidify his capture of the nomination after most of his opponents had dropped out.

This year, Clinton holds what many consider an insurmountable lead to capturing the nomination, although Sanders did pull out a surprising win in Michigan. On the Republican side, Trump is the presumptive front-runner but the field is still dividing the vote for the lead anti-Trump candidate.

One of the key differences between North Carolina and the other primary states Tuesday is how delegates are awarded. Ohio and Florida are winner-take-all. North Carolina allocates its delegates proportionally.

To get sense of what we might expect Tuesday, I looked at both the 2008 and 2012 electorates, along with the voter registration pool of active and inactive voters as of the end of February. Granted, same-day registration is still available, but current general trends should hold when voters begin casting ballots.

Could this change with the Trump phenomenon on the GOP side? There has been speculation that Trump is pulling in not just voters who have never participated in the primary process, but also some mischievous Democrats (who needed to switch their party registration to unaffiliated) to raid and vote for what some consider to the be the weakest of the GOP candidates.

Diving into different aspects of the electorate, one of the key differences that we have seen in earlier primary contests is the gender differences between both parties. In North Carolina, women make up a majority of registered voters (54 percent), and were 60 percent of the 2008 and 2012 Democratic primary electorate.

Conversely, in both Republican primaries, the gender split was nearly even. With the Trump phenomenon, it will be important to see if more men show up to cast ballots in the GOP primary.

From a racial perspective, it’s not surprising that Democrats see a substantially more diverse electorate than the Republicans do. With the state voter pool being 71 percent white and 22 percent black, Democrats have seen over 30 percent of their primary electorate non-white, with 2008 seeing 40 percent non-white voters showing up to solidify Obama’s nomination prospects.

Age has become an important component of what we are seeing on the Democratic side, too, with younger voters going substantially for the 74-year-old Sanders, while older voters being Clinton backers.

One of the noteworthy aspects to this year’s Democratic primaries is the intersection of gender and race. For example, in neighboring South Carolina, exit polls indicated black voters made up over 60 percent of the electorate, and that black women were the plurality.

In the past two Democratic presidential primaries, white women made up the plurality of the voters (38 percent), while white men and black women were second and third in the electorate.

It will be interesting to see what the racial and gender breakdown of Tuesday’s Democratic primary electorate will be; the early sense from other states is that the Democratic electorate has become more liberal, and that in the South, white men tend to trend much more conservative, especially in rural and suburban areas.

The expectation for North Carolina’s primary was that it would be a prominent voice in the selection of both party’s presidential nominees. While the Democratic race seems to favor Clinton, the Republican race remains the wild card. Tuesday will probably giving us a much clearer sense if Donald Trump is indeed on his way to capturing the GOP nomination.