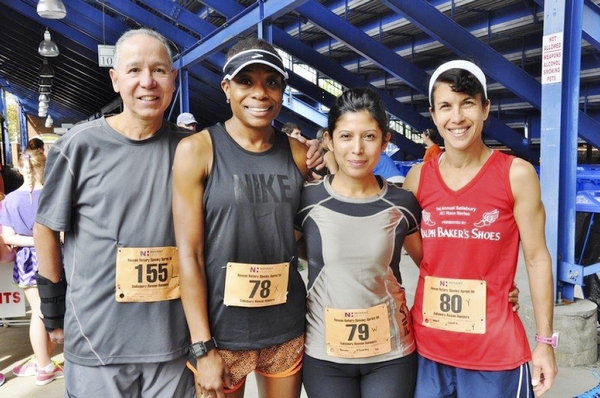 Last call for the Beginning Runners Class, which starts at Novant Health Rowan Medical Center at 6 p.m. on Tuesday night! It is possible to join the class after the first week, but try to make it on the first week when the whole program will be explained. Eight weeks of educational talks by professionals on subjects like running form, shoes and equipment, stretching and strengthening, nutrition, injury prevention and safety provide useful information. Then we go for a run of increasing distances from a half mile on the first night to 3.1 miles on the last over a certified course at Knox Middle School.

Each person gets a cool dri-fit training shirt, membership in the Salisbury Rowan Runners for a year, individual coaching and entry into the Bare Bones 5K on Memorial Day weekend. There is plenty of camaraderie and fun while increasing your overall fitness. The class is open to those who have never been runners, who need a jumpstart on resuming a wonderful habit or just need a boost making progress with the basics. Call 704-310-6741 or 704-202-6601 with any questions. Novant Health, Salisbury Parks and Recreation and the Salisbury Rowan Runners provide this ongoing series.

The next race up locally is the Mt. Hope Church 5K Run/ Walk for Missions on Saturday, March 26. This will be a fun event held at Salisbury Community Park. Approximately half the course will be run on asphalt with the other half on gravel and grass. Footing will be good and walkers are encouraged. There will be a half-mile fun run for kids 10 and younger.

April is full of some of the best events locally. On Sunday, April 3, the UMW Run for Missions is a 5K race that loops the City Park lake three times, allowing spectators to see the runners up close multiple times. April 9 will have one of the best little races around with the East Rowan Little League 5K at the Rockwell baseball complex. In my opinion, this is the flattest course in Rowan County and runs very fast. April 17 has the Rock Your Sox at Knox 5K, using the Greenway 5K course. April 23 has both the Down and Dirty Mud Run at the South Rowan YMCA and the West Rowan High School ROTC 5K. Finally, on April 30, the Millbridge Elementary 5K completes a very busy month locally. All of these races are unique and benefit their own charities. If you are considering running a 5K, come out to one of these races that are scattered around the county.

More information on the Beginning Runners Class and all of the races listed above is available at www.salisburyrowanrunners.org .

Dr. Acquawon Stallworth decided that she wanted to start running in 2010, just six years ago. Her first goal was to join some friends who were planning on running the Buck Hurley Triathlon. Little did Acquawon know at the time that she would become one of the best female runners in the area and a dominant masters (age 40 and over) runner.

Acquawon’s first race and one of her current favorites was the China Grove Main Street 5K in June. She said, “I was fifth or sixth in my age group with a time of a little over 25 minutes, but I was hooked.” Just six years after that first race, Acquawon now has completed 110 races, including half-marathons, triathlons, cycling races and running races of all distances.

Acquawon’s biggest race so far was the Black Girls Run Sweat with your Sole 15K in Atlanta during September, 2014. She said, “I had no idea that Atlanta could be so hot, humid and hilly. I was the 2nd place master’s finisher.”

“Home is Columbus, Georgia, and I moved to Salisbury from Memphis, Tennessee in July, 2001. I like living in Salisbury but it always feels good to return to where I grew up, usually about three times a year,” said Acquawon.

When not running, Acquawon enjoys reading, cycling, spending time with family and friends, going to the movies and traveling. Over the past five years, she has been to Hawaii, Canada, Paris, London and Aruba.

A family medicine doctor, local runners have been known to get some free advice from Acquawon. She is a gifted track runner at short distances, always ready with a quick smile, and is currently the queen of local masters runners.

“My friends and staying healthy have motivated me to continue running. I believe that as a physician, practicing what I preach to my patients is important. And I can tell my patients it can be difficult to manage all the demands of a busy day, but you can still manage to eat healthy and exercise,” said Acquawon.

My biggest running goal is to remain fit and injury free. I realize that with time, my speed will decline, but if I am without injuries, then I can run as long as I wish. As I get older, I always want to be competitive in a friendly way with my fellow age group runners.”

Acquawon plans to run the Race Fest Half Marathon in Charlotte on April 16 with one simple goal. She said, “I just want to beat my time from last year.” Personally, I bet it happens.

Enjoy the great weather and hit the roads!