Teens with a Mission: “God does super-duper things!” 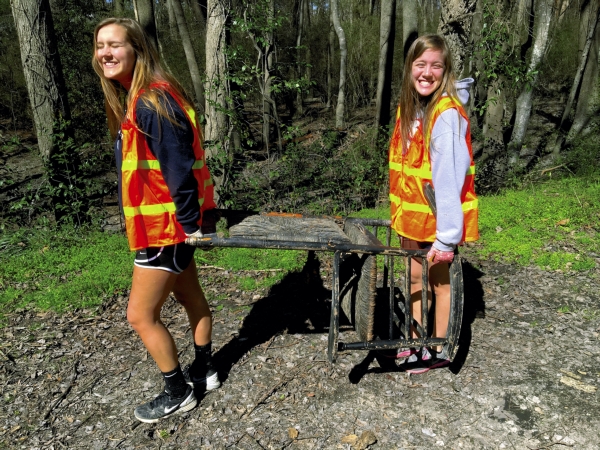 Every summer, the Teens with a Mission group from First Presbyterian Church in Salisbury go on a major trip. The mission trip this summer will be to San Antonio, del Mar in Mexico where the teens intend to participate in the construction of two houses.

As a warm-up, 12 teens and four adults headed for Columbia, South Carolina, last Friday evening with plans to help with an ongoing cleanup around Lake Katherine. The major flooding of last October has left certain areas of Columbia still struggling with leftover trash and environmental concerns. The TWAM group worked with Habitat for Humanity. Rev. Brian Daoust, Director of Christian Ed and Youth said, “We all knew that Habitat builds houses, but volunteers in Columbia have been repurposed for cleanup and rebuilding. Mold and mildew have played havoc in the area.”

On Saturday, the group went to a neighborhood bordered by the lake and began collecting the trash and debris. Daoust said, “We found everything from the usual bottles and cans to a driveway basketball goal. The kids came up with the remains of a boat dock, outdoor furniture and even an unopened bag of ant killer.” Others found a dog crate, all kinds of balls and even spotted a jet ski.

Many of the houses in the area were still uninhabitable according to Steve Clark, recreation coordinator with the City of Salisbury. He said, “These were nice houses and most looked fine from the outside. Inside was a different story. A large amount had been gutted inside and repairs were still underway in many of them.”

Daoust added, “We could see the damage and the progress that had been made. In many cases, the homes had the drywall removed and even some of the 2x4s. Homes had to dry out for six weeks before the mold could be controlled. Most of the homeowners in the area had no flood insurance. People kept stopping to thank us for the work that we were doing. One homeowner, just back into his house after repairs, bought us all pizza and the whole group was invited into his house to eat it.”

One resident told of water rising so fast that she had to climb out of a window into a boat and eventually was carried to safety in a truck. Water rose so fast that the high ground near these houses was at least chest deep in water during the worst of the flooding.

One lasting conversation occurred on Saturday afternoon. A repairman working in the area asked where the group was from. One of the teens replied, “We are from First Presbyterian Church in Salisbury, N.C.” To that, the repairman replied, “With God? God does super-duper things!”

“The kids really got behind this. I was proud of the kids. It was easy to see how important the work was. The shared misery of all the flooding really bound our group together,” Daoust said.

The TWAM group was hosted by Trinity Episcopal and McGregor Presbyterian churches. They began Sunday by helping to serve breakfast at Shandon Presbyterian Church. About 200 homeless and needy individuals received a wonderful breakfast and were then sent away with a bagged lunch. Clark said, “I thought we were going to eat there too, but there was no food left by the time everyone was served. We ended up going to IHOP and then back to Shandon for their morning worship.”

TWAM Adviser Fowler said, “There were several experiences while we served breakfast. One man talked to himself and some of the kids were uncomfortable around him. We later found out that he had been a professor of music and because of personal troubles had lost his way. The man later played the piano for all those eating breakfast. Some of our kids were blown away by this. Experiences like this and conversations with those at breakfast helped our youth to see that anyone can be affected by the vices of this world and even their own circumstances.”

“Not all the teens are members at First Presbyterian, but they are all from our community. All of them are trying to do the same good work. Because of the great adult leaders and so much support from our church, these kids will remember this trip for a long time,” said Daoust.

Clark added, “I was a little reluctant about this trip before going, being unsure of what spending the weekend with the teens would be like. It was just fun, getting to hear them talk and seeing how thankful they were when doing the work. There was no complaining and all of them were great troupers. But it was fun too to see how wiped out they were on the way home.”

About 32 teens will make the trip to Mexico this summer. Daoust said the group will stay at the Youth with a Missions base and work with Homes of Hope on the houses. TWAM leaders and teens will leave for Mexico on Sunday, July 17, and return the following Saturday, July 23. More than half the group has made a mission trip before.

After completing her first mission trip as TWAM adviser and now looking toward her second this summer, Fowler added, “We were blessed to serve these people as they needed and fortunate to show them that Christ is alive for you and me!”