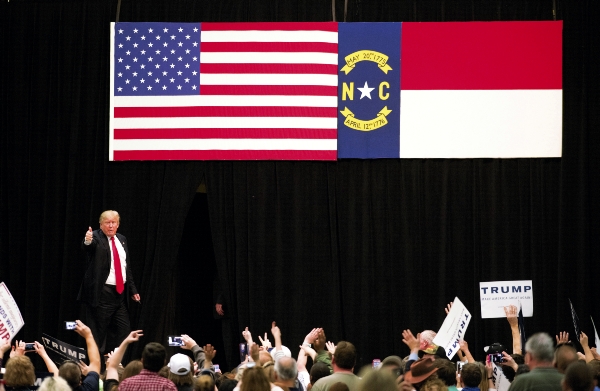 Jon Lakey / Salisbury Post File Photo - Donald J. Trump made a campaign stop at the Cabarrus Arena in Concord on March 7. Trump is currently vying for the Republican nomination in the upcoming presidential election. He placed first in North Carolina's primary.

Trump, the Republican front-runner, trotted out his well-known ideas — a wall on the United States-Mexico border, reversing trade deficits and immigration. He also briefly mentioned a number of other common talking points, including: repealing the Affordable Care Act and Common Core. His Monday speech was the closest Rowan County has come to seeing action in the 2016 presidential race.

Trump then rattled off a half dozen or more topics where America would start “winning.”

At every turn in the speech, he drew raucous applause and cheers. He also attracted two dozen or more protesters, many of them from Salisbury. Some were ejected by security before saying a word. Others were boisterous for a few seconds before being snatched.

One of the first groups kicked out included Salisbury resident Daniel Brown and Catawba students Ronalyn Dizon and Tabitha Bass. The trio was among a group dressed in black. Holding hands, the group stood silently on the arena floor. Not long after taking their places, Trump supporters booed the group. Security quickly rushed to push the group off of the arena floor.

Brown said security told the group they were trespassing.

The group never uttered a word, but drew significant attention from the crowd immediately after lining up. After being escorted out, Brown said Trump supporters tossed trash at members of their group. He said reactions from Trump supporters speak volumes about why the New York businessman shouldn’t be elected president.

“We’re afraid of him being elected,” he said. “We’re all afraid of what will happen to America.”

Salisbury resident Marc Anderson was also escorted out by police. Anderson said he knew the group that included Catawba students but wasn’t standing near them.

“I’m not entirely sure why I got escorted out, but when they grabbed me I started talking,” he said. “I honestly believe I was escorted out because I was black.”

Jon Leach, another Salisbury resident, was significantly more boisterous. Leach said he “definitely deserved to get escorted out.”  He waited until Trump stopped talking for a minute before verbally protesting. As he was escorted out of the arena, Leach held up two middle fingers and drew jeers from the entire audience.

Trump took the hecklers in stride. Protesters frequently show up at Trump rallies. In Concord, Trump often poked fun at the protesters as they left.

“Go home to mommy,” he said as security kicked out a young protester.

When security pushed Leach out of the building, Trump said: “I didn’t think you had people like that in North Carolina.”

Once Trump finished heckling of his own, he quickly returned to his talking points. Former NASCAR driver Mark Martin, who endorsed Trump on Monday, was actually the first to mention Trump’s border wall idea.

Later in the speech, Trump said he’d build the wall as tall as the Cabarrus Arena and Events Center’s roof.

When talking about the economy, Trump focused on Carrier, which makes air conditioning units. The company has announced plans to move at least 1,400 jobs from Indiana to Mexico. If Carrier wants to sell its Mexican-made products in America, Trump said, it would have to pay an extra tax.

“What I would do with Carrier is say the following: ‘Folks, enjoy your stay in Mexico, build yourself a really nice plant,’” Trump said about the company. “Every single unit that comes across the border, you’re going to pay a 35 percent tax on that unit.”

Trump also said he supports water-boarding, a form of torture, and much worse if laws can be changed. He said the terrorist group known as ISIS plays by different rules than the U.S.

It’s hard to win a war when you obey laws, Trump said.

“ISIS cuts off heads like not since the middle ages right? Medieval times,” Trump said. “They drown people in cages, big steel cages, and they drop them in the ocean. They lift them up. They wipe out 40 people at one time.”

“How long do you think ISIS would be around if General George Patton headed a little group going over to the Middle East?” Trump asked. “I don’t think they’d be around very long, folks.”

In his free-flowing speech, Trump only briefly discussed other topics. Trump said he would repeal and replace “Obamacare.” The health care law has led many companies to move employees from full-time to part-time work, he said.

He exited the arena to the same raucous applause as when he first started speaking.

“It’s not often that you get to come to a presidential rally,” he said.

Long mentioned rebuilding the economy as an item he liked about Trump.

“But if anybody can do it, he can,” Patterson said.

He said Trump is what the country needs. Patterson said he switched his party affiliation from Democratic specifically to vote for Trump.

“I’ll advertise Trump whenever I can,” he said.

Trump’s next campaign event is 7 p.m. Wednesday in Fayetteville.