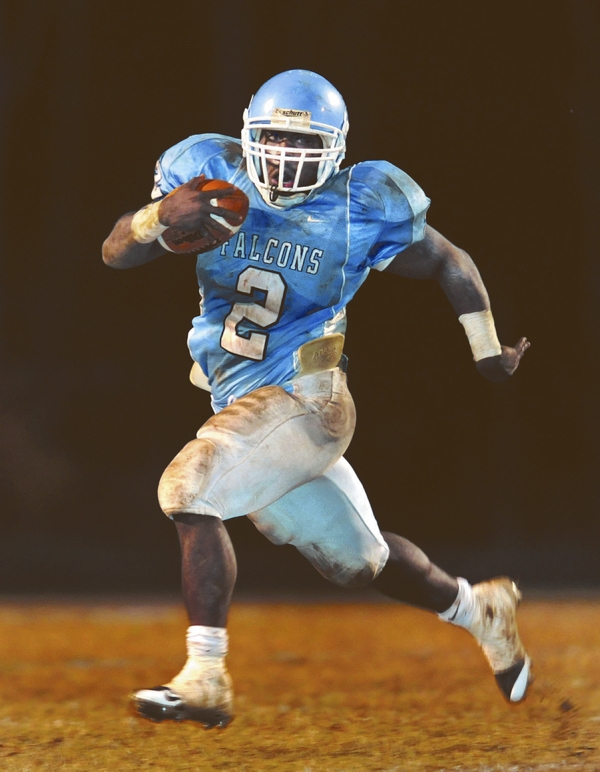 On Nov. 20, 2009, West Rowan’s K.P. Parks flies down the field against R-S Central in a 38-0 victory. K.P. is getting his shot at pro football with the new Major League Football organization. Wayne Hinshaw / Salisbury Post file photo

Kevin “KP” Parks was watching a college basketball game in February, Kansas vs. Oklahoma, when he finally got drafted.
They didn’t get his name exactly right, but they were close enough.
“It came scrolling across the bottom of my TV screen with the rest of the Major League Football draft picks,” Parks said. “They listed me as ‘Kevin Park, running back, Virginia’ but I was like, ‘Well, I guess that’s me.'”
It was him.
Parks will get a shot with the Norfolk-based team in the new Major League Football organization.
He’s living in Charlotte, working out fanatically as he always does, and he also stays busy training and instructing youngsters such as West Rowan’s exciting receiver Kortez Weeks.
“Kortez reminds me of me,” Parks said. “He always does the extra.”
Parks, who was drafted on the 61st round, will report to Norfolk for duty on March 30, and he’ll try to make a team that’s being coached by Wayne “Buddy” Geis. Geis has had numerous pro and college coaching gigs, including tenures as an assistant with the Dallas Cowboys and Green Bay Packers.
“It’s an exciting thing, an opportunity,” Parks said. “I believe it’s a very good thing. All I ever wanted was a chance, and this is a chance. If I can’t make it, then I’ll live with it.”
If you haven’t heard of Major League Football, well, it’s coming in April to eight cities. All those cities haven’t been identified yet, but they will all be large cities that don’t have NFL or Major League baseball franchises.
Parks was one of hundreds of players drafted from a pool of thousands who had registered with MLFB and filled out paperwork in order to be considered for the draft.
There are expected to be about 80 players in each training camp. They’ll be trying to make a 53-man roster. Players are expected to be paid about $2,500 per game.
Obviously, a lot of start-up pro football leagues turned to ashes. There was the 1970s World Football League that included the Charlotte Hornets. Then there was the USFL, NFL Europe, XFL and UFL, just to name a few.
Major League Football, which plans to offer a 10-game regular-season schedule starting in April, plus playoffs that will end in July, has advantages over those previous leagues, including serious financing. There’s already a two-year television contract with American Sports Network.
The biggest difference with previous failed leagues will be in philosophy. Major League Football understands it can’t compete with the NFL. MLFB aims to be a developmental league for players, coaches and officials — a step between college football and the NFL.
MLFB, which is run by former NFL receiver Wes Chandler, sees its mission as forming a bridge from college football to the NFL. It’s a league that hopes to keep dreams alive. Some of the guys who compete in MLFB will get to live out their dreams.
Maybe Parks will be one of them.
“I’d compare it to the NBA Devo League,” Parks said. “The goal for all the players in Major League Football is to showcase their talents for the NFL.”
Parks would get a lot of votes as the greatest offensive player in Rowan County history. He set county, state and national records in his career at West Rowan from 2006-09. Parks was the centerpiece of a perfect storm. West was so good that he was able to play two 16-game seasons and he closed his career with a 30-game winning streak. He’s always been the first to say he was fortunate to play for great coaches, and for teams with a great quarterback, great blockers and a great defense.
Parks’ career numbers at West — 10,915 rushing yards, 154 rushing TDs and 158 total TDs — are legendary. He carried the ball 1,370 times and averaged 8 yards per carry for four years.
Prior to Parks, a four-touchdown game was considered a huge deal in Rowan County and a rare feat. Parks scored 59 touchdowns as a senior when he was the state’s player of the year, and for him, at least, four TDs became a run-of-the-mill Friday.
There are inaccurate perceptions that Parks didn’t have a strong career at Virginia, because he didn’t dominate as he did in high school, but he was outstanding. There were injuries, but when he finished his career, he ranked fifth in school history in rushing yards (3,219), sixth in touchdowns (33) and seventh in all-purpose yards (3,998).
He had 11 100-yard rushing games for the Cavaliers, mostly for less than stellar teams, and he’s one of four backs in Virginia history to catch 100 passes.
When Virginia held its Pro Day for NFL scouts prior to last April’s draft, Parks showed he was strong (21 repetitions at 225 pounds in the bench-press) and proved he was explosive with a vertical jump of 39.5 inches and a broad jump of 9 feet, 10 inches.
What he didn’t do was run one of his better 40 times, and that hurt him. He ran in the 4.7s, and he needed to run in the 4.5s. Parks is also short, and there’s nothing he can do about that. He’s listed at 5-foot-8, but he’s 5-6 without shoes.
The draft came and went. Not only did Parks not hear his name called in the seven rounds of the draft, he didn’t get invited to anyone’s camp as a free agent, which was a shock to everyone.
“Before the draft, my advisor had heard from six or seven teams, but no one pulled the trigger,” Parks said. “Then, after the draft, there was nothing. No calls — nothing. I took it hard, and it was absolutely one of the toughest times in my life. But after a while you realize that life goes on. You’ve got to keep going, and I have.”
Parks had bulked up for the NFL draft, but now he’s back down to 195 pounds. He feels light, quick and strong, and he’s ready to give Major League Football his best shot.