Softball: Nesbitt gets chance to play and coach overseas 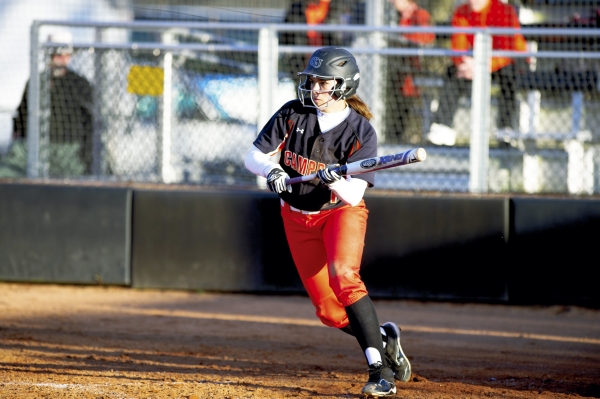 Photo courtesy of Campbell Sports Information ... Ericka Nesbitt is shown above batting for Campbell during her senior year in 2015. Nesbitt, a former East Rowan High School standout, turned her fantastic Campbell career into a chance at professional softball in Switzerland, later this year.

GRANITE QUARRY — East Rowan graduate Ericka Nesbitt probably will be in the Campbell University Sports Hall of Fame someday.
Nesbitt lost six weeks of her junior year to a devastating shoulder injury and played her senior softball season for the Camels wearing a brace, but she ranks third all-time at the school in career batting average (.409), runs (147), hits (256) and steals (77).
The shortstop ranks sixth all-time in assists (387).
Entering this season, there were only 100 women in Division I history who batted .400 for their careers. Nesbitt, whose lifetime mark is .409, is a member of that exclusive club.
Nesbitt was certain her playing days were over when she left Campbell for the working world and a counseling job at Lexington Treatment Associates, but then she received an email that seemed too good to be true.
That email was all about going to Switzerland for plenty of free travel around Europe, while getting paid to play softball.
“Well, it was exciting to think about,” Nesbitt said. “But I didn’t think it was real. I called the Campbell coach (Todd Bradley) and asked him to check it out for me.”
Bradley got back to her a few days later. He assured her the offer was legitimate.
The Lucerne Eagles of the Swiss Baseball and Softball Federation have a coach with American ties, and the organization is always looking for young Americans to not only compete in national and international tournaments but to teach baseball and softball to young athletes.
Nesbitt was one of the players who were recommended to the Eagles. She signed a contract with Lucerne a few weeks ago.
Nesbitt will be joining one of the elite clubs in Switzerland. Lucerne softball won national championships in 1999, 2001, 2010, 2011 and 2012 and won the European Cup in 2002.
“They were really excited when they found out I was a slapper,” Nesbitt said. “I’ve been slapping for a long time, and I know I can teach it. I’ll be coaching a baseball team and a T-ball team and I’ll be playing third base and catcher on a softball team. They’re in a some big tournaments. They’ll be traveling a lot, playing in Germany, Italy and Austria.”
It sounds like a great opportunity for Nesbitt. Her round-trip plane ticket to Switzerland will be paid for by the Eagles, and her housing and most of her meals and travel expenses will be free.
“It all sounds awesome,” Nesbitt said. “You think you’re done with something you love, and then you get a chance to keep on playing.”
Nesbitt was a terrific player at East Rowan, incredibly quick on the bases and blessed with a powerful arm. If she got to first base, she scored. And if she fielded a ball in the hole, the runner was out.
Nesbitt and pitcher Chelsea White co-starred for the Mustangs, and they went 87-11 from 2008-11 for coach Mike Waddell. They won four straight conference championships and made two trips to 3A’s Final Four.
Nesbitt didn’t drop off any at Campbell, batting .402 as a freshman and .419 as a sophomore. She set school single-season school records and made All-Big South teams.
That terrible injury interrupted her junior year. She remembers it like it happened last week.
“A ball had just dropped in behind me the play before and I got yelled at, and then another ball was hit,” Nesbitt said. “It was clearly going foul, but I’d made up my mind I was going to catch it.”
She went into a slide, but thick grass turned that slide into more of a tumble. She tore multiple ligaments and muscles in her left (non-throwing) shoulder.
“My shoulder kind of turned upside down and everything was torn,” Nesbitt said.
While that play ended her junior season when she was batting “only” .347, she was determined to make it back for her senior year.
“I did all the rehab, and I remember the date I got released was on Sept. 10,” Nesbitt said. “Nine days later, I tore everything again when I was lifting weights.”
She still made it back for that last season at Campbell. With her shoulder in a brace, she batted a career-high .438. She batted .470 with runners on base. That was all pretty amazing because she was in constant pain.
Nesbitt plans to spend lots of hours the next few months helping Waddell with this year’s East Rowan team. There’s no one more qualified to teach young Mustangs slapping, base-running and fielding.
Then she’ll head to Switzerland. Surprisingly, Lucerne doesn’t want her to play shortstop. They want her to play third base and catcher.
Catcher? When was the last time Nesbitt was a catcher?
“Well, the answer to that is never,” Nesbitt said with a laugh. “But it’s going to be fun learning. I’m excited. I know I’m blessed to have this experience.”