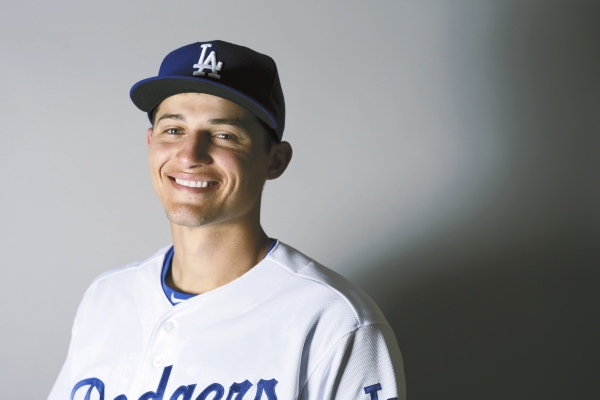 GLENDALE, Ariz. (AP) — Corey Seager looked right at home when he made his major league debut with the Los Angeles Dodgers last season.

Seager is looking to build off his impressive finish with Los Angeles in 2015. He was promoted in September and batted .337 in 27 games while supplanting Jimmy Rollins at shortstop.

But the touted prospect won’t be able to catch anyone off guard this year.

“You can expect him to improve and make adjustments that the league is going to make on him,” first-year manager Dave Roberts said. “Opponents have a one-month sample on him. It’s a cat-and mouse game.”

The Dodgers think Seager is ready for the challenge. Roberts made Seager his starting shortstop weeks before Los Angeles’ Cactus League opener Thursday against the Chicago White Sox, and first baseman Adrian Gonzalez has said the Charlotte, North Carolina native is “a kid I could see being a Hall of Famer.”

“You just have to get out there and be on the field, be out there as much as you can and just go out, play and not think about it too much,” Seager said.

Seager is the youngest son in a baseball family. His brother, Kyle, is a third baseman for the Seattle Mariners.

Corey Seager was drafted by Los Angeles with the 18th pick in 2012 draft and quickly became one of the majors’ top prospects.

“Expectations are on him as far as his skillset,” Roberts said. “But I think as an organization we’re just expecting Corey to be Corey. We’re not expecting him to carry the load in any way. For me, it’s more of him being consistent at short.”

The Dodgers had a similar situation with center fielder Joc Pederson a year ago. Pederson, a leading prospect at the start of 2015, got off to a fast start and looked to be a contender for National League Rookie of the Year, but struggled after the All-Star break.

Roberts isn’t sure where Seager will bat in the order. In Game 1 of the NL Division Series against the New York Mets, Seager batted third.

“The No. 3 position in the order is very important, no doubt,” Roberts said. “At that point last season, I can’t speak to what they were thinking. Corey was swinging the bat well. At this point, we’re evaluating every day.

“Every player is different. Some guys with incredible skill sets, you might want to take the load off and hit them lower. Certain guys can handle it higher in the order. As I get to know Corey, I’ll make that decision.”

NOTES: Cuban right-hander Yasiel Sierra threw 30 pitches in his first bullpen session Tuesday. Sierra finalized a $30 million, six-year contract with Los Angeles on Feb. 21. “I’m here to do whatever is needed, whether it is starting or pitching in relief,” Sierra said through a translator before the bullpen. Sierra arrived in camp Monday. … Former Dodgers pitching great Fernando Valenzuela visited camp.