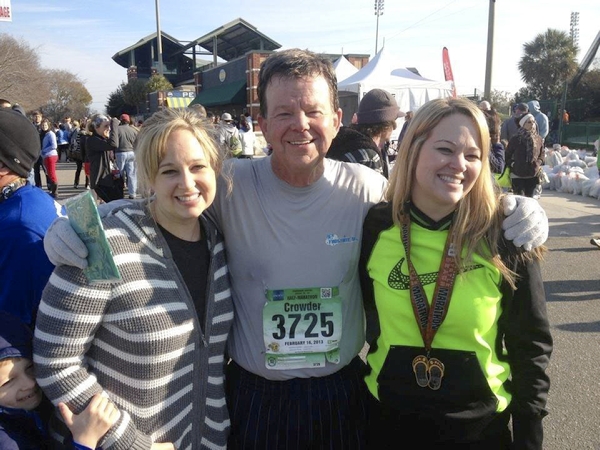 Daughters Kristen on left and Allison on right. Wayne Crowder is proud that both will be running the 5K at Myrtle Beach where he will complete his fifth straight half marathon. Submitted photo.

The first of March is always the unofficial kickoff of the spring running and racing season. The next event up is one of our favorites because it benefits the Salisbury Fire Department, a great friend to the local running community. The fire department provides emergency medical services to the races and more than once have had to step in to address a situation. Our chance to give back to the fire department is just around the corner when the St. Patrick’s Day 5K toes the line on March 12 at the JF Hurley YMCA.

Proceeds for the St. Patrick’s Day 5K are used to restore a gem of Salisbury history, a 1941 American La France aerial truck. That restoration has continued for several years since the fire department bought it back from a local farmer who acquired the truck at auction. After sitting for years in a shed, the painstaking restoration has progressed to the point that the truck can now be driven. The running works and internal parts of the truck are ready to go. For the first time, the truck will be driven to the 5K race, available for all to see.

With the truck scheduled to go on display at one of the fire houses soon, the last remaining obstacle to complete the restoration is a very detailed paint job. Salisbury Fire Chief Bob Parnell said, “There are so many intricate parts of this truck that the paint job will be very expensive. We hope to raise enough through the 5K to get the work started but the first quote that we received was very high. We will be working to acquire enough additional funds to complete painting that will allow the truck to participate in the fire department’s upcoming 200th anniversary on Dec. 8, 2017, and other community activities.”

The 5K will begin and end at the YMCA. All participants get a commemorative dri-fit shirt, unique awards and plenty of food. Contact Fire Marshall Terry Smith, the race director, with any questions at tsmit@salisburync.gov . Smith says that photo opportunities will be available with the truck and donations will be accepted.

The only other 5K in Salisbury during March is the Mt. Hope Church 5K Run for Missions at the Salisbury Community Park on March 26. More information on both of these races is at www.salisburyrowanrunners.org

One of my goals with this column has been to introduce interesting runners to the community. In Wayne Crowder’s case, my only plan is to make him even more famous. There is so much to tell, and I’m afraid that the editors won’t give me a couple of pages to talk about this one guy.

Elvis Presley, then 42, died in the summer of 1977 at a time when 30-year-old Wayne Crowder was carrying a protruding belly, a pack of cigarettes and was short of breath. Crowder said, “I looked at Elvis and thought, this can be me in 12 years. So, I pulled the emergency cord on the train of life and got off. I knew I had to make a change and started jogging from telephone pole to telephone pole.”

Crowder was a social studies teacher at North Rowan High School. He said, “I knew I had to diet or exercise. Dieting hurts all the time, so exercise was better for me.” Crowder was satisfied to know that he was getting back in shape, but wasn’t really excited about running for just weight control or fitness. The motivator was the time clock at the finish line. Crowder continued, “I didn’t race the other runners as much as I did the clock, always wanting to get faster.”

Training partners Eddie Grissom, Mike Julian and Ed Dupree provided encouragement, and soon Crowder set his sights on a marathon. He said, “I read somewhere that only 1 percent of the population could finish a marathon, and as just an average athlete, I wanted to complete 26.2 miles and finish in the top quarter of the field.” Crowder competed in the 1980 and 1981 Wilmington Marathon with a best time of 3 hours, 11 minutes and 13 seconds. Crowder, now 66, has completed six marathons and about 25,000 running miles.

“Sometimes now when I am plodding along, I think about how much less effort it took years ago to run this far. Inside my body is a young man wondering what happened!” said Crowder who is training for his fifth consecutive Myrtle Beach Half Marathon. His son-in-law, Ryan McMunn, will run his first half marathon. Daughters Allison McMunn and Kristen Smith will run the 5K, and regular runner and son-in-law Victor Smith will manage the kids. Crowder’s race manager and wife of 40 years, Diane, will provide support to the group. Crowder said, “I don’t know how I will do, it won’t be my best and it won’t be my worst.”

Crowder, a collector of quotes, had some thoughts on his nearly 40 years as a runner. He said, “I just gotta’ have the heavy breathing. Breathing the air while running makes me feel more alive than I ever do. We are all going to die, and what happens between now and then is what matters most. I must do this!”

In the “you probably didn’t know this about me” category, Crowder is best friends with Gov. Pat McCrory. McCrory was assigned to Crowder as a student teacher while at Catawba College, and they remain in close contact. Crowder said, “I sure wish I had treated him better back then.”

Crowder said, “But it’s really all about the people. It is a pleasure to share my interest with so many fine people. If you are a runner, you just have an unspoken understanding with a fellow runner.”

I can’t add a thing to that. See you next week!

Rowan pageant winners work to help others as they…