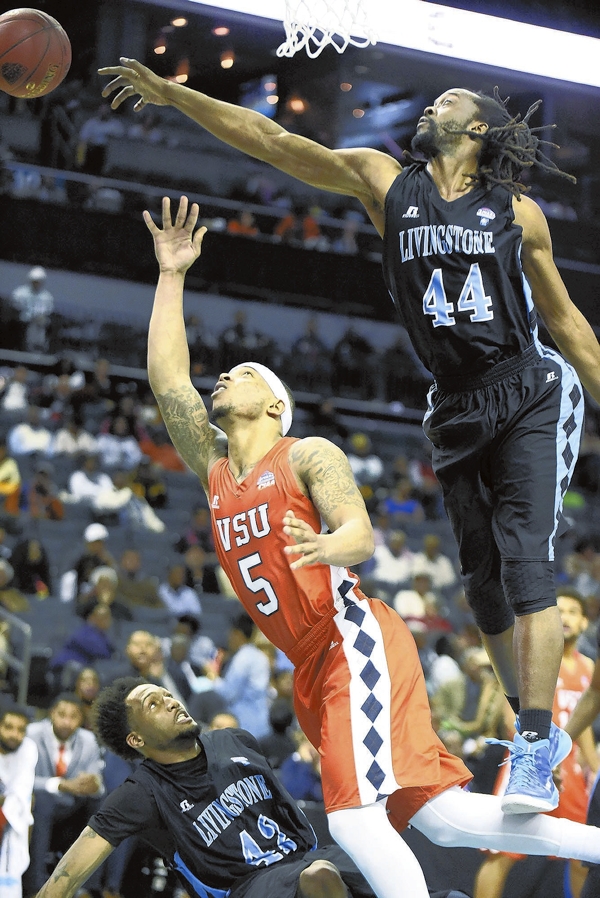 CHARLOTTE — The bell has tolled for Livingstone’s late-blooming men’s basketball team.
The Blue Bears were the little engine that could — and nearly did — before falling, 89-79, to favored Virginia State in Saturday night’s CIAA championship game.
“We underachieved from the beginning of January,” coach James Stinson said at Time Warner Cable Arena, where Livingstone’s two-year reign as defending league champ was gaveled to a close. “That’s what put us in position to have to win four games in four days. This week was a testament to what these men are built like.”
Livingstone (15-17) had been bottling magic all week, but ran out of star dust against Virginia State (23-5), which won its first conference tournament since 1989.
“We looked at the bracket the first night,” senior forward Ty Newman said after contributing 21 points and nine rebounds in his final game. “Our goal was to try to make it to this night. That kept us going.”
Newman joined teammates Eric Dubose and Daryl Traynham on the all-tournament team. Virginia State’s Kevin Williams was named MVP.
“I was ready,” Williams said after netting 24 points. “Whatever I could do to help the team, I was going to do it.”
Williams played a key role as the Trojans erased a 36-35 halftime deficit. His 3-pointer from the right side with 18:38 to play put VSU ahead for good and triggered a 12-0 run that buried the Blue Bears.
“Right off the bat, our defensive intensity picked up in the second half,” said VSU’s Lonnie Blow Jr., the CIAA’s coach of the year. “It got us rolling. When we defend, we’re tough.”
When Williams turned a Blue Bears’ turnover — one of 24 by Livingstone — into a runaway layup, the Trojans had a 47-36 lead, just five minutes into the second half.
“We just didn’t make enough stops,” said Traynham, who poured in a season-high 29 points. “When we needed one, we didn’t get it.”
Livingstone trailed by as much as 64-49 when VSU guard Javon Moore (30 points, 9 rebounds) hit the first of two free throws with 8:44 remaining. That’s when Traynham put the Blue Bears on his back and delivered a brain-frying solo — spinning and driving and dancing for 12 points in a crowd-pleasing, two-minute span. When he sank two foul shots with 5:21 to go, Livingstone had inched to within 68-63.
“I wasn’t going to stop until it was all zeroes on the clock,” he said. “We just didn’t score enough to win the game.”
Stinson appreciated Traynham’s do-it-all spurt.
“What he did was start to attack a little more,” the coach said. “I wish he had started doing that a little earlier.”
But instead of riding that wave of momentum a bit longer, Livingstone was outscored 9-2 over the next two minutes and trailed, 77-65, when Stinson called timeout with 3:25 to play. With the clock waning, Livingstone was forced to foul. Virginia State responded by making 10 of 14 free throws in the final three minutes.
“They’ve got a great team, top-to-bottom,” Newman said. “They were hungry in the second half. They looked like a better team.”
And Livingstone didn’t. But let the record show that while the Blue Bears may have gone down, they went down standing up, playing four tournament games in four days.
“We’re proud of them,” Stinson concluded. “They learned some life-long lessons this year. We grew as a team, became a lot more loving toward each other. You can’t measure that.”
Perhaps the best tribute came from Blow, who also won the league’s coach of the year award with St. Augustine’s in 2010.
“A team that wins back-to-back championships, especially in a conference as tough as this one, will always be remembered. The run they went on, a lot of schools never get that chance. They played with the heart of a champion tonight.”

NOTES: This was Livingstone’s fourth straight appearance in the conference title match and fifth in the past six years. … Livingstone was attempting to become the fourth program in CIAA history to win three consecutive championships. … Traynam scored 81 points in the tournament and Newman collected 73.