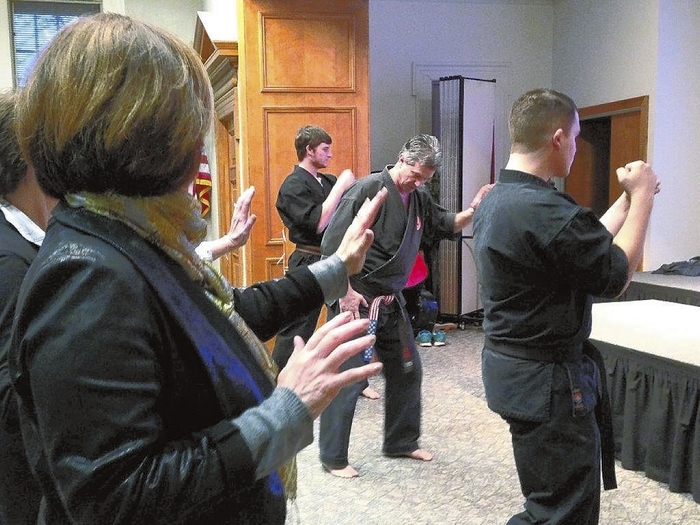 From left, Hunter Posten, Ricky Smith and Lukas Miller show how to throw a proper punch. Photo by April Everett

The staid quiet of the library was interrupted by the capacity crowd gathered in the Stanback Room of the Rowan Public Library on Monday for a self-defense workshop. Participants screamed as they practiced head and body punches.

This was the second in the 2016 Learn. Act. Grow series, an award-winning informational series presentation by the library, now in its third year.

Presenters included Ricky Smith, owner of Sidekick Karate, and Cpl. Wanda Gibson, community relations officer for the Salisbury Police Department. Smith is an Eighth Degree Black Belt and has 40 years of teaching martial arts. Gibson has been a police officer for seven years and is the only woman in Salisbury to qualify for the SWAT team. She is also a former K-9 officer.

Smith demonstrated moves used for self-defense in various confrontation scenarios. He showed how to strike with an elbow and use it as a weapon. Smith demonstrated using the elbow in a situation when someone tries to force a victim into a vehicle.

When asked how to fight multiple predators, Smith said, “You can only fight them one at a time. Poke the first guy in the eyeball and the others will likely scatter. Act like a bulldog pinned in a corner! Don’t stand there and be a victim.”

Often something as simple as a strong and confident voice can change the momentum of a confrontation, Smith said.

“A forceful ‘Stop right there!’ will make a difference,” he said. “Be aware, start yelling. Be ready to fight. Don’t get into a conversation. The bad guy is often going to look for the easy victim. If he thinks you are crazy, he’ll probably leave you alone.”

Another demonstration included what to do when grabbed around the chest from behind. Smith demonstrated bending the knees and lowering the body center. He said, “Use the heel for a weapon, hit the knees, groin and eventually the ribs and solar plexus. But put your whole being into the technique.”

Sidekick Karate offers self-defense classes for all ages and abilities. Smith stressed how karate can build self-esteem and uses the mind, body and spirit. More information can found at www.sidekickmma.com or by calling 704-216-2258.

“Most of my work before was on the negative side of things,” Gibson said. “I enjoy meeting with groups such as these and providing positive information.”

Gibson addressed crime prevention and the efforts to take away the criminal’s desire, ability and opportunity. For personal safety, she said, “Be aware of your surroundings and try to stay in well-lit and higher traffic areas. Criminals are looking for the weaker person.”

She encouraged attendees to walk with another person and limit distractions. Distractions such as burying your head in a cell-phone provide opportunities for the criminal. Never leave your purse unattended.

Safety at home was another topic addressed by Gibson.

“Never let a stranger in your home,” she said. “Get to know your neighbors and watch out for each other.”

Other tips include making sure all windows and doors are in good working order and keeping entry areas well lit. She said that criminals are often looking for hiding places. Gibson also reminded homeowners not to leave new TV or computer boxes near the street.

Vacation tips included not talking about your time away from home on social media. The Salisbury PD also provides a vacation watch service. If homeowners will notify the PD when they will be away on vacation, extra checks will be made on the property. Homeowners should also provide information about any expected vehicles in the driveway. Gibson and Chunn will provide a free home safety check when contacted at 704-638-5333.

Vehicle safety tips were also addressed. Gibson suggested that drivers lock their valuables in the trunk, hide the wires of any electronics and have your keys in hand before you return to the vehicle. “Don’t wait till you get to the vehicle and then start digging in a hand bag. That provides opportunity for the criminal,” she said.

Gibson also advised not stopping to aid stranded motorists. She added, “It is a different world today.”

Summing up her portion of the presentation, Gibson said, “Stay alert and stay alive! Trust your instincts and use common sense. Always report suspicious activities.”

Learn. Act. Grow. continues in March with a presentation by Chef Chris Herron of Morrison Health Care and Novant Health Rowan Medical Center on March 28 at the South Rowan Library from 5:30 to 7 p.m. Herron will address ways to make inexpensive vinaigrette dressings to spice up your salads. Call 704-216-7734 to reserve your spot.