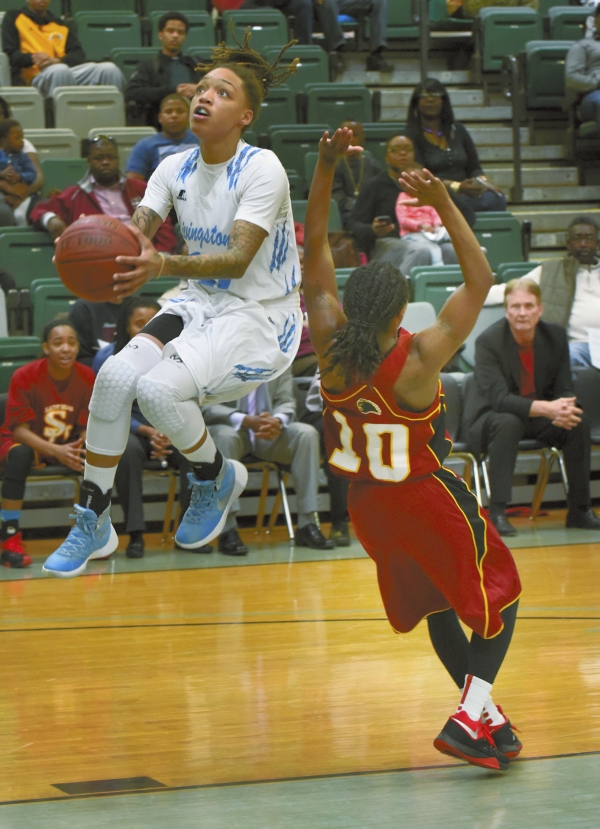 Wayne Hinshaw/for the Salisbury Post .. In a game earlier this season against Shaw, Livingstone guard Amber Curtis goes by defender Kaula Jacks (10) for a layup. Curtis was named to the All-CIAA team on Monday, as well men’s player Ty Newman.

defeating Winston-Salem State both times. Last year, the Blue Bears defeated the Rams, 106-91, to win the championship and in 2014, Livingstone defeated WSSU, 83-68, to win its first-ever CIAA basketball title.

Newman, who averaged 17.5 points and 6.5 rebounds per game, was named to the All-CIAA

selection will motivate him to lead his teammates to an outstanding game tonight.

“This time of the year, win-loss records really don’t matter except for seeding,” Stinson said. “All

slates are wiped clean and each of the 12 CIAA teams are here for one reason and one reason only, to win the CIAA championship. We’re the two-time defending CIAA champs, so everyone’s

going to be out to get us, so they can say they knocked off the champions.

“We haven’t had as good a year as we would have liked with respect to wins and losses, but now our goal is to string together a series of wins and, if it’s God’s will, to three-peat as champions and bring another trophy back to Salisbury,” continued Stinson.

Women’s team coach Anita Howard shares Stinson’s sentiments about the season. The Blue Bears enter the tournament with a 14-11 overall record, 9-7 in the CIAA and second-see in the Southern Division.

The team is led by senior guard Amber Curtis (Savannah, Ga.), who averaged 14 points and six rebounds per game and on Monday, was named to the All-CIAA women’s team.

“I’ve been very pleased with Amber’s output on the court,” Howard said. “Going into the

tournament, she’s leading the team with her passion and drive to bring home a championship. We didn’t have the season that we wanted, especially after being picked overall preseason No. 1 in the conference, but being able to come in as a number two seed and get an opening-round bye speaks volumes about how we fought the entire year. Nonetheless, we’re aware that now everybody comes in with a 0-0 record, and anybody can go home on any given night. We have to bring our A-game to Time Warner Cable Arena to ensure we get to continue playing past Wednesday in the tournament.”

The CIAA was founded in 1912 and is the nation’s oldest African-American athletic conference,

as well as one of the most recognized and respected conferences in NCAA Division II. Last year, despite inclement weather that hit on day two of competition, the CIAA Basketball Tournament

provided an economic impact of $55.6 million to Charlotte’s economy, according to CIAA