‘She is my angel’: Rescue is an answer to prayers 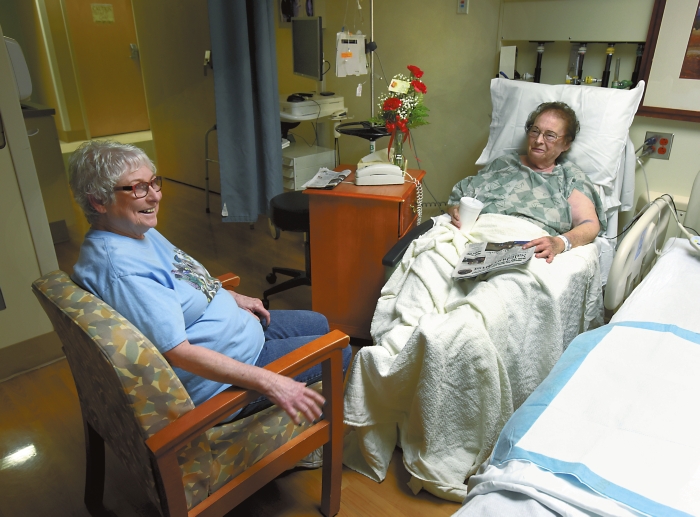 Eighty-five year old Ollie McKnight fell during the bitter cold days breaking her leg. Gwen Conner, Salisbury Post newspaper carrier (on the left, found her and called for help. Conner delivered McKnight's newspaper to her in the hospital. photo by Wayne Hinshaw, for the Salisbury Post

Long-time Salisbury Post rural carrier Gwen Conner already had enough on her mind concerning deliveries last Tuesday. Ice on the road had closed schools and caused Conner to delay the normal start time to begin delivering her two paper routes. She figured the later start time would be safer. Conner delivers about 500 papers each morning.

Around 7 a.m., Weaver Road resident Ollie McKnight threw a light jacket on over her nightgown to go out to feed her cats. She planned to spend the morning volunteering at the nearby Price of Freedom Museum. Having used these steps countless times, nothing had prepared her for what happened in the next instant.

McKnight slipped on the ice on her door mat and the first step, then landed hard on the brick steps with one leg folded under the other one. She knew that she was seriously hurt and soon was bleeding profusely from a long and deep gash in her shin. Unable to get up, McKnight couldn’t get back in the house, and shrubbery shielded her from the road.

Conner was now making good time on her route, hoping to minimize the delay for Post subscribers. Her husband, Dennis, was riding in the back seat rolling papers and giving them to Conner to toss into the passing yards and driveways. McKnight’s is the last house on Conner’s route and the two women had previously agreed that the paper would be left in the driveway since Conner used the driveway to turn around anyway.

With the cold taking hold and the injured foot turning blue, McKnight was calling out to passing cars. “I began to pray, knowing that I was in a bad place,” she later recalled. “I could see the cars going by but they couldn’t see me waving to them.”

After about an hour on the steps, McKnight saw Conner’s car pull into the driveway to toss out the paper and turn around to head back toward China Grove.

“I didn’t see her but I heard her yelling,” the carrier said. “We stopped, and Dennis grabbed a big blanket that he uses in the car while rolling papers.” Conner immediately called 911 and went to get a neighbor while Dennis waited with McKnight.

Conner had met McKnight, 85 and a retired school teacher, only once before. That previous conversation and the timing of Conner’s delivery on Tuesday possibly saved McKnight’s life.

“She was definitely my angel that day,” McKnight said. “I couldn’t get up and I was out of options. It was so cold that I couldn’t have lasted much longer.”

McKnight was taken by ambulance to Novant Health Rowan Medical Center in Salisbury. X-rays found that her leg was broken and that her replacement knee was shattered. The severe laceration would need surgery also.

No stranger to hospitals, McKnight has had a heart valve replacement, a pacemaker installed and a kidney transplant. She is also diabetic.

“I know my way around hospitals. You have to get their attention and tell them what you want. I made sure to have them contact my doctors,” said McKnight.

Surgery the next morning included setting the broken leg and a heavy cast from groin to toes, along with extensive stitching of the shin laceration. The replacement knee couldn’t be addressed at that time due to the risk of infection and will be reassessed later.

McKnight was disappointed that she wouldn’t be able to boast of having three kidneys and three replacement knees. Most kidney transplants only removed infected or diseased originals and in McKnight’s case, the new one was just added.

Conner made a special delivery of the Friday Salisbury Post to McKnight at the hospital and they enjoyed rehashing the events of Tuesday morning. They shared thoughts on everything from politics to religion.

Conner recounted another time when she noticed that a resident was not picking up his paper. Conner contacted a neighbor and eventually was able to get police to break the door down. Three days after falling, the man was found alive and lived five more months in a rest home.

After 30 years as a newspaper carrier, Conner described the work that she loves. She now delivers the Post, the Charlotte Observer and the Wall Street Journal all at the same time.

“I have my country music blaring and roll right on down the road,” she said. “Sirius radio provides the ’80s and ’90s country that I like while driving 125 miles a day.”

Conner credits delivering the paper for allowing her to spend lots of time with her grandson and two step-daughters, as they often rode along on the delivery routes.

“I paid them to help me. They got $5 a week for riding along and putting the paper in the box on the passenger side,” said Conner. “I wouldn’t be there working for the Post if I didn’t enjoy it. Even on the day when a bird flew out of the paper box and into my car and left a lot of droppings. Or the day when my car leaked so much that it flooded all the already rolled papers.”

Now at Liberty Commons for rehabilitation, McKnight hopes to soon return to her home of over 60 years. “I’m going to quit ice skating down the steps, though. There is a new medical alert button that I will be using, too, and it is good for anywhere I go, even in the shower.”

The two ladies enjoyed their time together.

“We both made a new friend over this but I didn’t do anything that others wouldn’t have done,” Conner said.

McKnight has a different take. “You are my angel. My pastor talked about you the other night. You are proof that there is a God that loves us and will take care of us!”