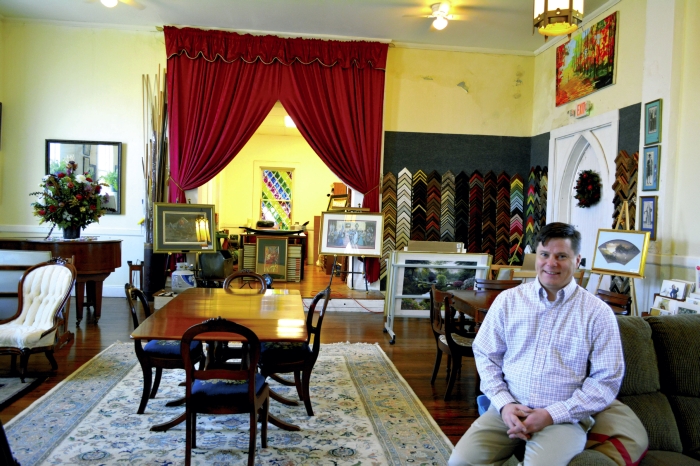 Jody Sedberry bought the art and frame gallery three years ago from his aunt, Jan Weinhold. It was previously run by his grandparents, the late Don and Merrea Weinhold. Photo by Susan Shinn, for the Salisbury Post.

For as long as he can remember, Jody Sedberry has been a part of the framing and art gallery his grandparents started 33 years ago.

Sedberry, 36, bought the business from his aunt three years ago. Sedberry’s Framing & Art Gallery will open at a new location, 324 W. Liberty St., this Saturday, Feb. 27, with an open house from 1 to 5 p.m.

“My uncle figured my grandpa was gonna be bored,” Sedberry says. “My grandpa did the framing and my grandma ran the store.”

Don and Merrea had a good business, Sedberry notes. They eventually moved to North Main Street, where a daughter, Jan Weinhold, took over the business when the couple retired for good.

“I worked as a kid with Grandpa and Grandma,” Sedberry remembers. “I did shrink wrapping and helped in the back.”

Sedberry later took a class at Forsyth Tech to become certified in framing and museum-quality preservation.

When the North Main Street building sold, Sedberry found a new location a few blocks away on West Liberty Street. The building had been the Christian Scientist Church; later First Baptist, just across the street, used it as a youth building before purchasing the old Y.

“This building had sat empty,” Sedberry says. “It was about to be torn down and turned into a parking lot.”

Sedberry got a deal on the building, and got to work. Pictures he took during the three-year renovation show numerous improvements. He was able to save the oak floors, which he had refinished. He and his mom, Donna Weinhold, worked to remove colorful spray paint from the arched windows.

“We used paint stripper, a tire brush, and a lot of elbow grease,” Sedberry says.

The back doors were completely rotted, but workers from Top Hat Construction built new ones in the same shape as the windows.

He and his brother, John Sedberry, a blacksmith who lives in Charleston, S.C., sheet rocked the 30-foot by 40-foot main room. It has high ceilings.

“That was a job for two people in pretty much one day,” Sedberry says. “It was a long day.”

The 1927-era pendant light fixtures are from the First Presbyterian Church, Greenville, S.C., which Sedberry found in an Asheville antiques store.

Along with all the artwork, framing supplies and equipment — most of which belonged to his grandparents — Sedberry has furnished the expansive room with furniture that family and friends gave him after he lost his belongings in a fire four years ago. Just this past week, he installed a baby grand piano purchased from his grandparents’ estate.

The room now has a homey, comfortable feel.

“That’s the way I want it to feel,” Sedberry says. “I want people to come in and sit down, have a cup of tea, look at the art and not be rushed.”

“I plan to feature an artist of the month,” he says. He’ll display not just paintings, but three-dimensional art as well.

Sedberry is now in the process of renovating the rest of the building to include a kitchen upstairs and an apartment downstairs.

Sedberry, a graduate of Johnson & Wales in Charleston, recently had hosted birthday party at the gallery, but he honored all of his family and friends who helped with the renovation.

He’ll welcome another crowd this weekend.