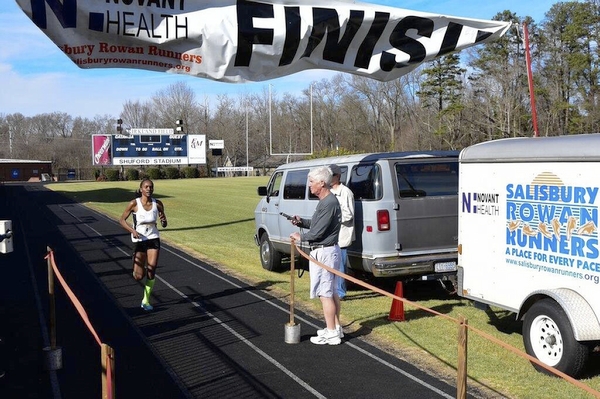 The 2016 Novant Health Winter Flight 8K was another success in its 33rd year. Some of the highlights included the second straight race day with spring-like conditions. Comfortably warm for spectators means challenging conditions for the runners, especially when coupled with strong winds. No new course records were set this year, leaving the 23 year old female course record intact.

Several notable efforts highlighted the day. One of those was a spectacular effort by 62-year-old Tom McCormack of Jonesborough, Tennessee. He blitzed the 4.97-mile course in 30 minutes and 12 seconds, just about 6:05 per mile. McCormack’s race pace would have won many of our local 5K races. I have already heard from Tom, and he assured me that Salisbury will see him again next year.

Andris Goncarovs and Grace Kahura got the wins. Goncarovs was a surprise winner with a sparkling time of 26:50. Kahura was expected to get the win and chase the course record. The top two finishers in the half-mile fun run were separated by a quarter second. Mav Spear and Grace Eppehimer battled throughout the race until Spear inched ahead at the finish.

One of the most interesting runners on hand was Kahura, originally from Kenya. I got to spend some time with her on Saturday afternoon and then again on the way back to the airport for her return flight to New York City. Kahura came to the United States with five other runners from Kenya but after two years is the only one still racing.

Now a resident of Katonah, New York, Kahura grew up in Ngong, Kenya. She was a talented youth runner, but her parents couldn’t afford to pay for camps or races. Kahura said, “In Kenya, you have to be invited to attend high school. I wanted to get ahead by attending one of the best schools, either a national or provincial school. I was admitted, but the schedule was brutal.”

What Kahura meant by a brutal schedule might have been an understatement. A typical morning went something like this: up at 4 a.m., study until 5 a.m., run until 6 a.m., then some tea and a run or walk to school that began by 7 a.m. After a 10-hour school day, there was another easy run after school. Eventually, Kahura had proven her ability as a student and was told by administrators that she could wait to arrive at 8 a.m. Kahura said, “I couldn’t do it, because the tutoring offered from 7 to 8 a.m. was important. I still went to school at 7 a.m.”

Kahura’s heavy training was intended as a gift for her family. “My training gave us hope. I had to do it for them.”  While training with the guys, she added, “If they could do it, so could I. Who was I not to train just as hard? What have they done that I can’t do?”

Coach John Mwithiga, known as “Warmup,” inspired Kahura. She said, “He is one of the most respected coaches in Kenya, and he told me that I had potential. I knew that I had to keep pushing harder, knowing that those who persevere the most will be successful.”

But Kahura’s life is not all about running. She enjoys cycling and playing tennis and said, “Sometimes you just have to have fun.”

Goals drive Kahura’s training. Not yet a marathoner, she has a 1 hour and 14 minute half marathon and was third in last year’s prestigious Fifth Avenue Mile. Current goals include a sub-15-minute 5K. Kahura said, “Training in Kenya is the best, but I have not been home in two years. Our Central Province is at about 6,000 feet in altitude, allowing plenty of opportunities for hill training.”

Still very young at age 22, Kahura has plenty of time to achieve her goal as a world class marathoner. She said, “I can’t drop off. I just have to keep going!”

Now that we are into February, other races are coming up. First up on Feb. 20 is the Warrior’s Way 5K at Salisbury Community Park. This event benefits the YMCA Warriors cross country and track programs.  The following weekend, Centenary Methodist Church hosts the Will Run for Food 5K. Proceeds will be used to package dehydrated meals for shipment overseas.

The first local race in March is one of the most interesting. The Salisbury Fire Department hosts the St. Patrick’s Day 5K at the Hurley YMCA. All proceeds go to continue the restoration of the 1941 American LaFrance ladder truck that was sold at auction then repurchased many years later. If all goes well, the truck will be driven to the race site for the first time. Check www.salisburyrowanrunners.org for more information.

A short update on my sciatica is not the best of news. About a week ago, I pushed my recovery too much and had a setback, continuing the struggle. I had hoped to have it in my rearview mirror by now, but that is not the case. The best thing about this public struggle is that several times daily, I meet new people of all ages who have experienced this issue. About the only good thing about my erratic ability to run is that maybe my journey will help the others who struggle with the same thing.

Have a great week on the roads, and I’ll hope to see you out there!

New wellness duo plus Kristy off and rolling into…