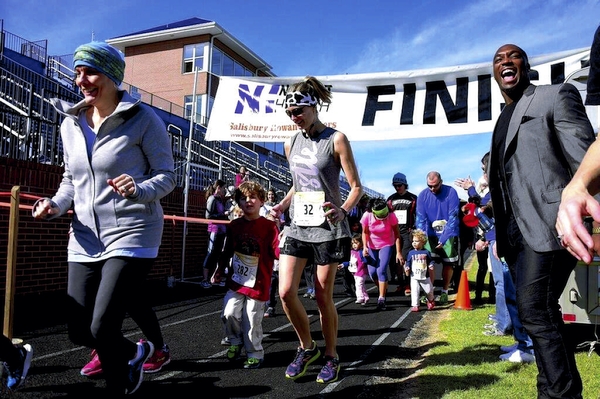 With runners in town from eight states and as far away as New York and Florida, the 33rd Annual Novant Health Winter Flight 8K, Health Walk 5K and Fun Run all hit the pavement on Sunday afternoon. While there was great expectation of a fast women’s field possibly challenging the female course record, warm temperatures and headwinds on the last half of the course took their toll.

Grace Kahura, originally from Kenya and now living in Katone, N.Y., went out hard while chasing the existing record of 26 minutes and 48 seconds set by Olympian Joan Nesbitt in 1992.

“I wanted to average three minute kilometers and was on pace till somewhere between miles two and three,” Kahura said. “The hills on the course were tough and I knew that I wouldn’t break the record. I was just glad to come to Salisbury and meet so many nice people. I would love to come back and challenge the course again.”

Andris Goncarovs was the overall winner with a time of 26 minutes and 50 seconds. He was followed by Matt Longworth in second with a time of 27:26 and Catawba cross country coach Jason Bryan in 28:36.

Kahura paced the women with a time of 28 minutes and 57 seconds, with Natalie Lawrence clocking 29:46 to take second and perennial winner Molly Nunn taking third in 30:33.

“The heat and wind made it a tough day for me,” Nunn said. “However, I am grateful to have been able to take part even though it was a challenge.”

Mav Spears won the half mile fun run by less than a quarter second over Grace Eppehimer. Both ran 3:21 and a fraction.

Chris Smith of the Jacksonville Jaguars was the official starter and Neal Wilkinson offered his spectacular version of the National Anthem just before the 8K race.

Salisbury Rowan Runners Vice President Steve Clark said, “This is truly a community effort to provide a top flight event and to raise the proceeds for Rowan Helping Ministries. Thanks to our fantastic sponsors and all the volunteers and I am sure glad that we didn’t have this race during the ice and snow of last weekend.”

Complete results are at www.salisburyrowanrunners.org