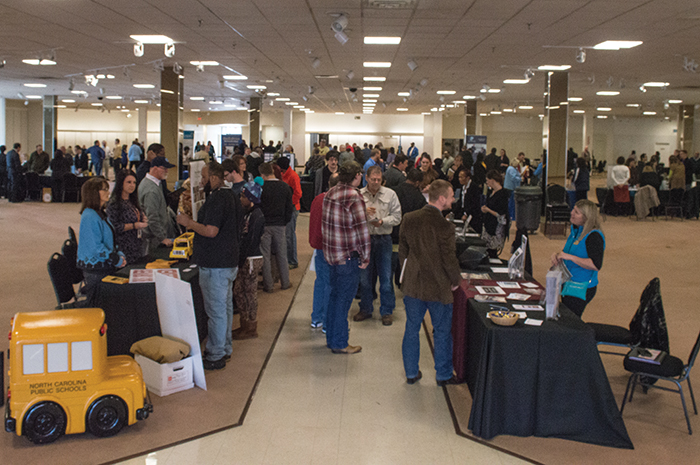 When former Freightliner employee Tamika Caldwell lost her job in early January, she also left behind part of a newly formed family.

The job paid well and came with good benefits, she said. However, Caldwell, a Salisbury resident, said she’ll miss the people of Freightliner’s Cleveland plant more than the work.

“Some I clicked with. Some I didn’t, but they were like your family,” Caldwell said. “You were with them at work more than you were with you’re real family at home. Over the course of a year, I got to know several people and loved a couple of them.”

Now, Caldwell and hundreds of others are looking for work. A number of the former Freightliner employees gathered Friday at West End Plaza for a job fair that included more than 20 companies — some looking for just a couple of employees and others looking for 10 or more.

Corey Hill, president of United Auto Workers local 3520 in Statesville, said the job fair was unique for Freightliner employees. Many times previously, the community hasn’t rallied behind laid-off workers, according to Hill.

“The last example of something similar I can think of is Pillowtex,” Hill said. “The community did a great job back then, but over the years that’s gone way.”

Faced with nearly 1,000 people losing their jobs, Rowan County leaders took aggressive steps to help members of the community, Hill said. After its initial announcement, Freightliner reduced its layoff total to about 850 — still a staggering total. An overwhelming number of the laid off employees — 97 percent — were union members, Hill said.

Despite county leaders’ efforts, the clock is ticking for many employees to find jobs. By law, Freightliner had to give employees a 60 days notice of the layoffs. Instead, the company laid off employees immediately and paid workers normal salaries and benefits. Now, many former employees have less than 60 days to find a job.

Jody Kirkman, an employee of Rockwell-based Schult, said his company is always looking for quality employees, and the manufacturing skills possessed by Freightliner employees could also be a valuable asset. Shult builds pre-fabricated homes. On Friday, Kirkman said the company was looking to hire about six people.

Cooler and freezer manufacturer Imperial Brown was looking to fill 10 positions on Friday, said employee Kristen Paustian. Specifically, the company needed first- and second-shift workers. The company, which has its East Coast facility in Salisbury, saw a need in the community and wanted to help out, Paustian said. Manufacturing skills from Freightliner, she said, might also be relevant at Imperial Brown, which manufacturers its products from scratch.

Other employers at the job fair included Rowan-Salisbury Schools, Novant Health, the City of Salisbury and Rowan County government.

Salisbury native Brant Ludwick estimated he filled out 90 to 100 job applications before Friday’s job fair. Ludwick said he enjoyed working at Freightliner, but the last week of work was difficult. Like most, he found out about the mass layoff immediately after coming into work on a Monday.

“I was heartbroken. I think everybody was,” Ludwick said. “We had to work the rest of the week, which was not fun. It was hard. There were a lot of angry attitudes and a lot of different attitudes about it.”

Caldwell recalled a November meeting between employees and management where employees were explicitly told rumors of layoffs weren’t true. Just over a month later, many were without jobs.

Multiple attendees of Friday’s job fair said a number of Freightliner employees picked for layoffs left before their last day, which the company considered quitting. Employees who left early won’t receive the few months of pay and benefits Freightliner is required by law to provide in instances of mass layoffs.

For those who stayed, Caldwell said the extra pay will give some former employees a chance to take more time when searching for a new job. Hill said it’s another unique decision by the company. By not giving a notice, and paying benefits instead, former employees have time to look for work while receiving a paycheck, Hill said.

Caldwell said the layoffs are simply a part of working at Freightliner.